At first glance, this beautiful scene of steel, earth, and water looks like a photograph! It owes this to Lysander Chau‘s keen eye and clever LEGO building techniques. Truly, this bridge and the surrounding scenes are made up of nearly 53,000 LEGO pieces! The scenes come from Lysander’s imaginative mind, but the bridge itself is modeled after the Tsing Ma Bridge in Hong Kong. While the build lives in a digital landscape, it still considers the constraints of reality. For example, the weakest part of the bridge, the middle, is supported by the cruise ship’s tallest point. No doubt there’s room inside the cruise ship to add light bricks, or a lighting kit, to make the New Year’s message shine! And that water! It’s rendered with such detail I can almost hear the waves lapping around the boats and land. 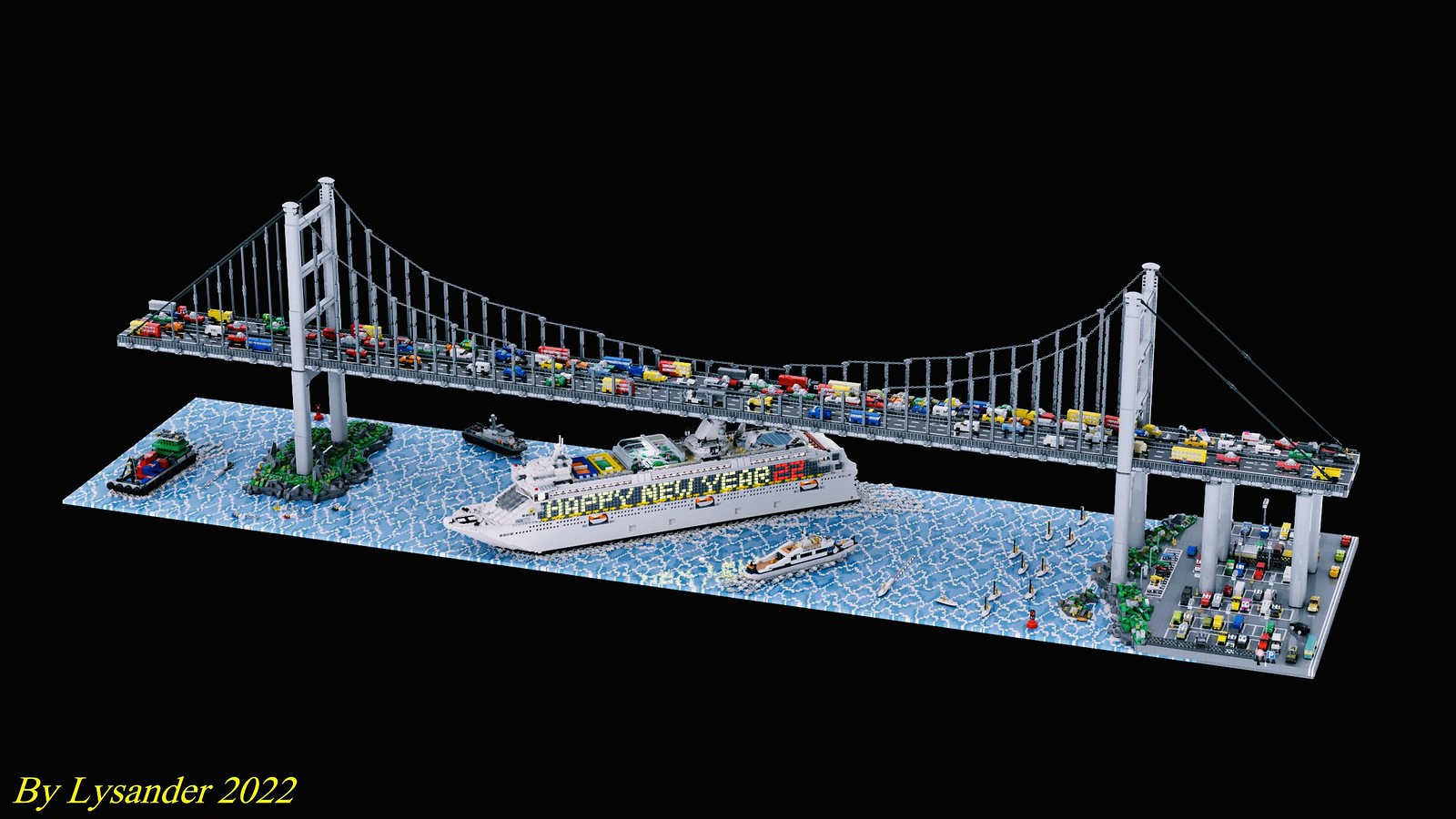 Taking a closer look at the water, we see it’s rendered in a pixelated style. Using sideways plates and bricks, Lysander creates asymmetrical geometric shapes of blue with crisscrossing white patterns. This represents the peaks of the waves, giving the water movement and shape. This is a brilliant technique that works extraordinarily well at this scale! Then there’s the seafoam in the wakes of the ships–it’s made with clear and white plates which blend nicely with the water beneath. The yacht feels like it’s cutting a path through the water! 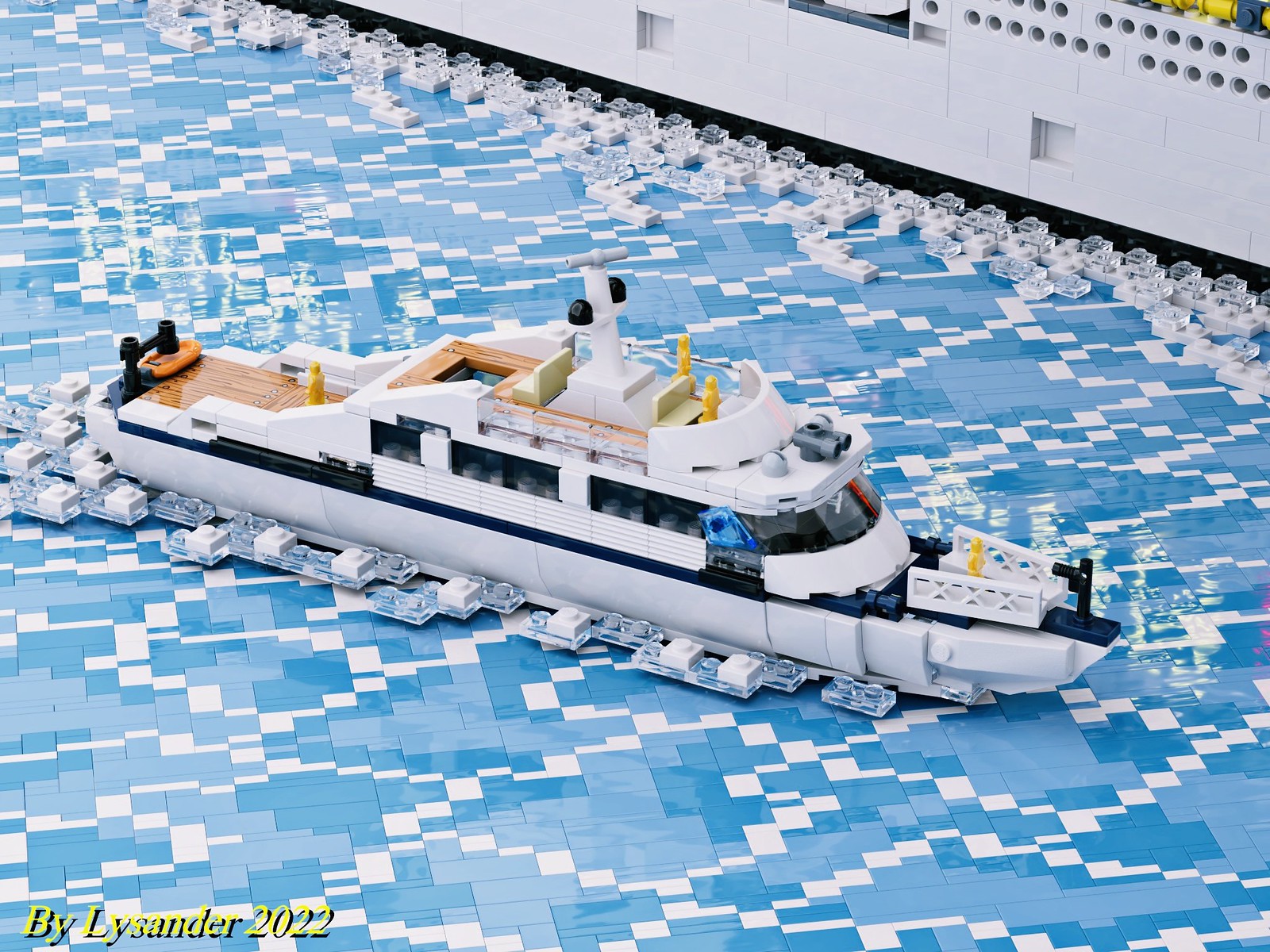 Speaking of wakes, check out the little speed boat beside the cargo ship. There’s a cute little wake trailing behind it using wedge slopes with clear plates bringing up the rear. Noteworthy parts usage is the surfboard making up the body of the speed boat! And how cool is it that the cargo ship is carrying LEGO containers? 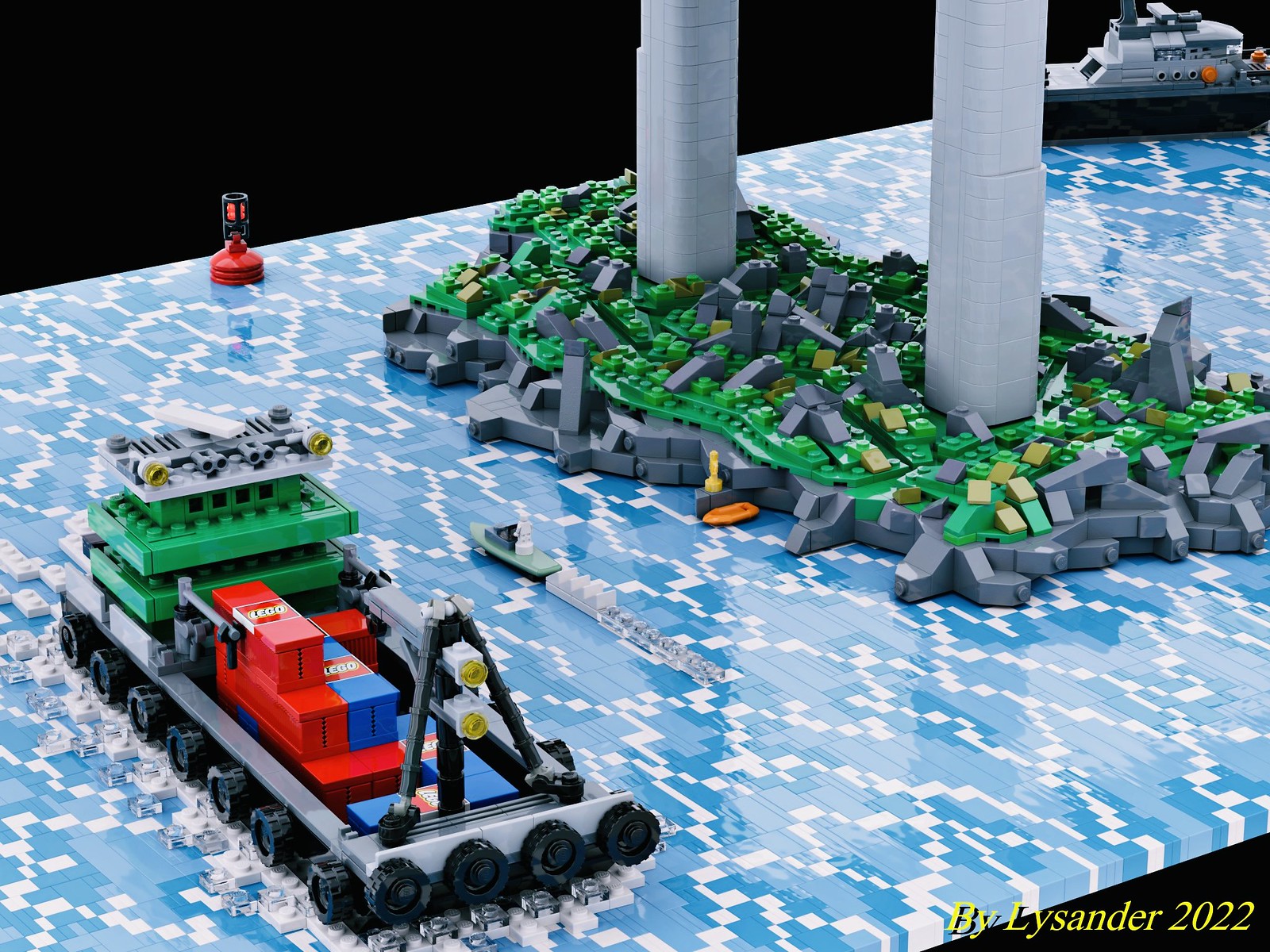 Beneath the bridge, on the other side, is a parking lot full of micro-scale cars. Sideways plates and tiles define the lines of the spaces for this popular waterfront spot. Because the lot is so full, we get to see a wonderful variety of the cars Lysander crafted. While some of the vehicles are similar in design, each one stands on its own, each one unique. Not one gets lost among the rest, especially those with a pop of color! My favorite is the lime green one in the foreground. 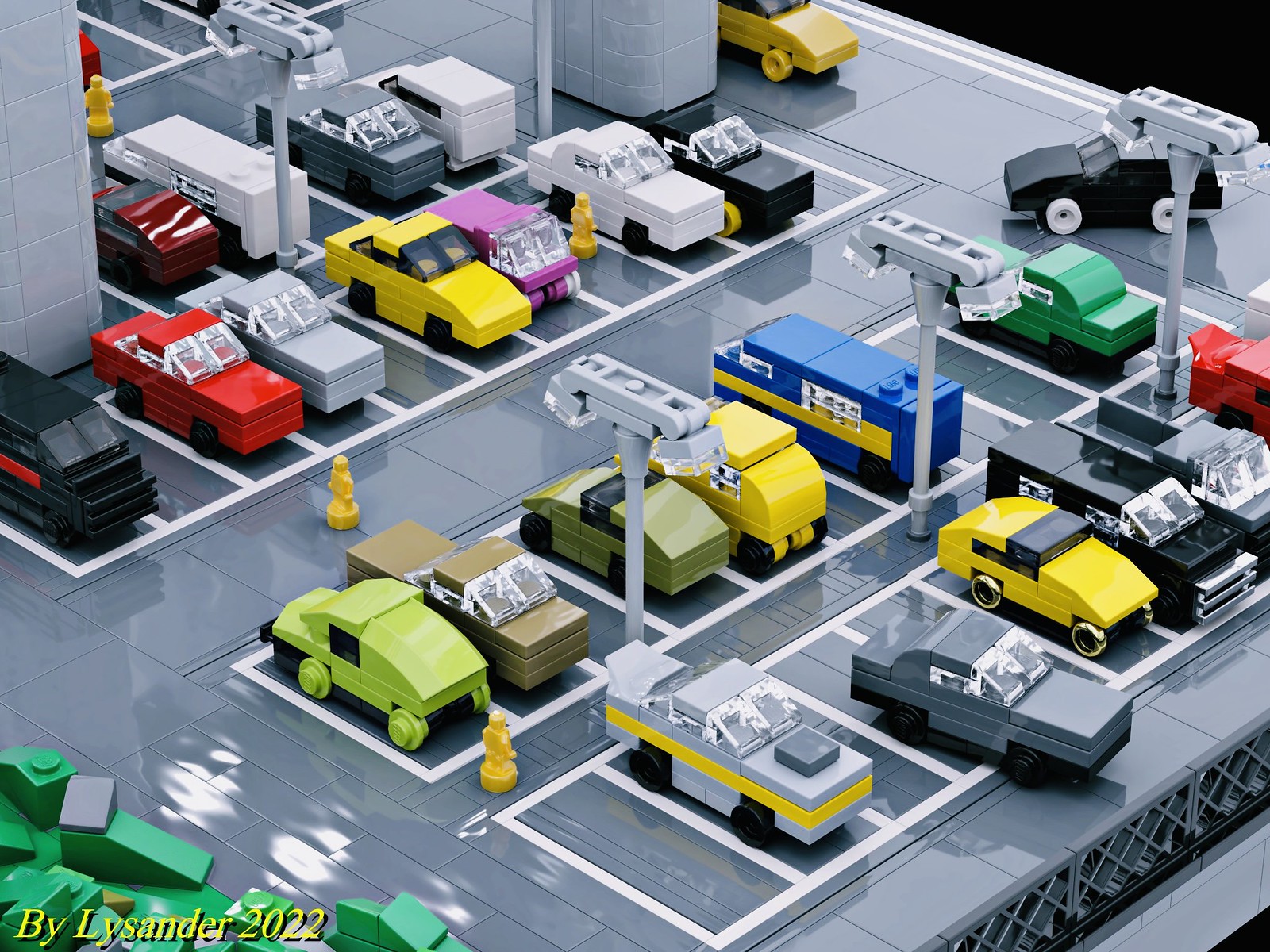 High above on the bridge itself are larger vehicles, like the double-decker buses! Unfortunately, there’s an accident holding up traffic on one side, but it doesn’t look like any LEGO people were harmed. What a relief! Emergency vehicles assist those involved and help clean up the wreckage so traffic can safely resume. 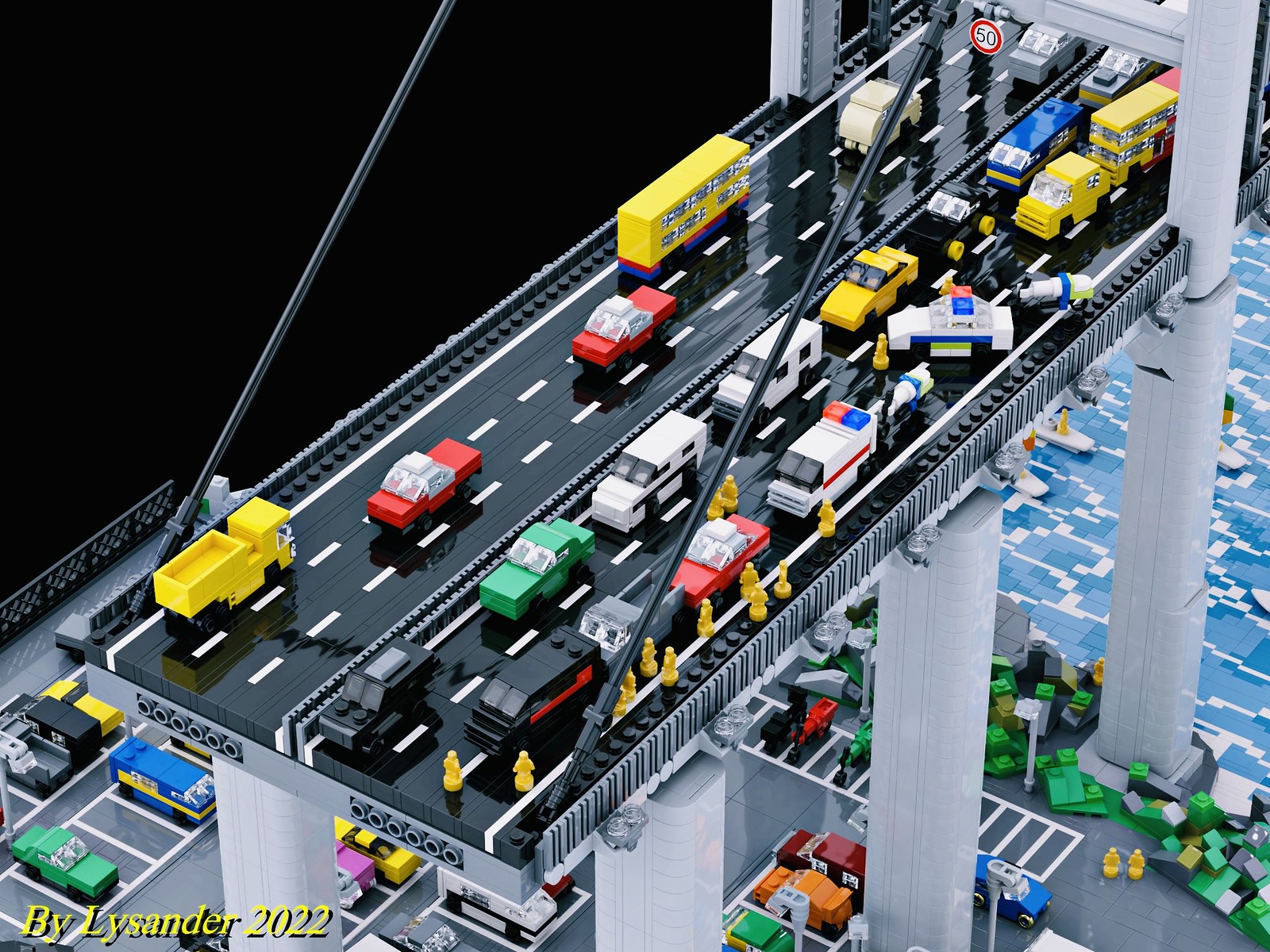 The bridge is well designed, from the main and suspender cables to the finer detailing of the roadway and railing on either side. Everything about this build is spectacular, whether seen from afar or up close. And there’s no wasted or underused space in the whole thing! From the bridge down to the fantastic waterway, there’s a story to explore.

1 comment on “This bridge will suspend your belief of what’s possible!”