The latest set in LEGO’s ongoing influential personalities, 40540 Jane Goodall Tribute, celebrates Dr. Jane Goodall, the famed scientist whose groundbreaking work has expanded our understanding of primates. Like previous influential personalities sets such as 40450 Amelia Earhart Tribute and 40410 Charles Dickens Tribute, it features a small vignette on a display stand and is available only as a gift with purchase. This time around you’ll need to spend US $120 | CAN $TBD | UK £120 with LEGO between March 3 and March 15 in order to qualify. The set contains 275 pieces. 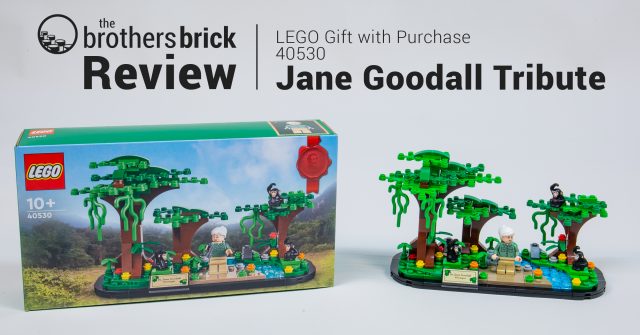 Unboxing the set and contents

The box has a bright, cheery theme with a photograph background that evokes the Tanzanian rainforest where Dr. Goodall conducted much of her research. The front features the red wax seal that’s signified all the influential personalities sets, while the back shows a few detail insets along with a photo of Dr. Goodall. It’s worth noting that this is the first influential personality set to portray a living person (the previous subjects have been Hans Christian Andersen, Charles Dickens, and Amelia Earheart). 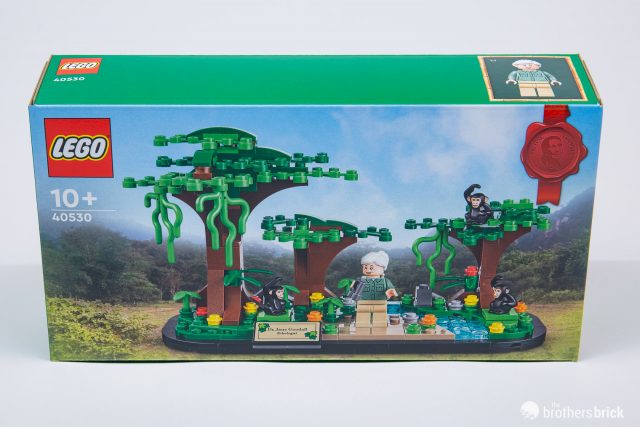 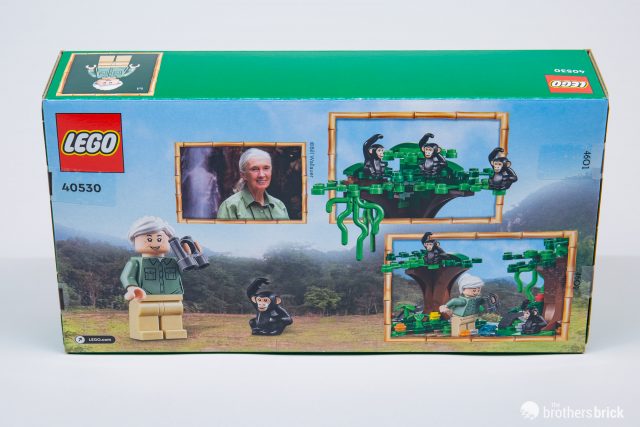 Inside the box, you’ll find five unnumbered bags of parts, a loose large plate, a tiny sticker sheet, and the instruction manual. 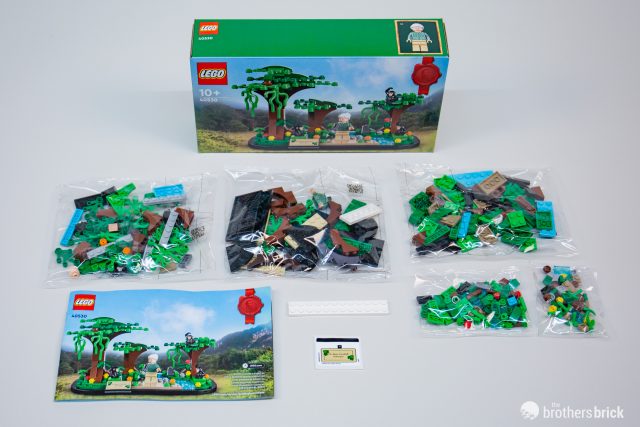 The sticker sheet contains only a single sticker that covers the 2×4 tile for the display placard. In case you’re unfamiliar with the term “ethologist,” having known Dr. Goodall an anthropologist or primatologist, ethology is the study of animal behavior, a branch of science to which Dr. Goodall has contributed significantly. 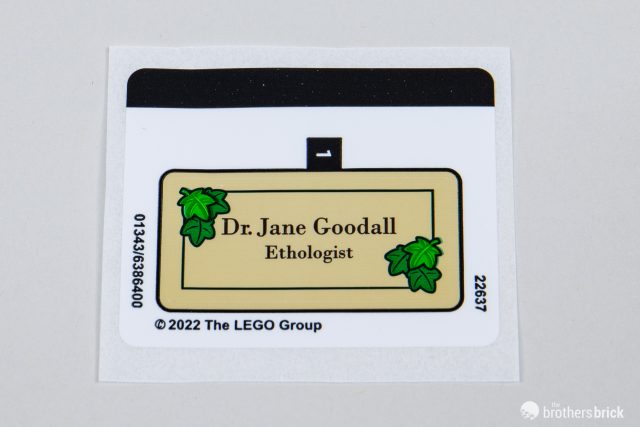 The manual contains a brief intro to Dr. Goodall and how she began studying chimpanzees in the forests of Gombe, Tanzania in 1960, and later turned to working on environmental causes to save the chimpanzees’ threatened territory. 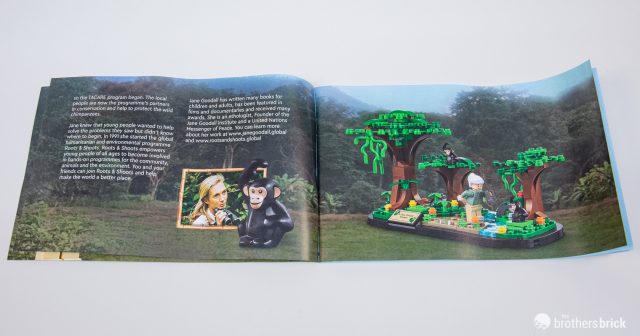 This set is a very simple build that will likely take you only a handful of minutes to construct. The foundation is a 24×10 rounded base made of a variety of plates and rimmed with tiles. 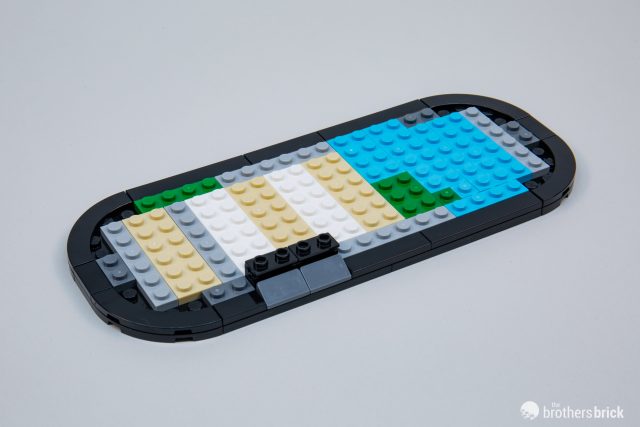 The initial plate layers are covered over completely with green grass, which is mottled between regular green and bright green, and a bit of sandy area made with dark tan, along with a small stream. There is quite a nice amount of detailing present with lots of little flowers and leafy elements that give it a sense of depth. The studs have been strategically placed, with a few 2×2 jumper tiles where the chimps will go and a pair of studs front and center on the sand for Dr. Goodall. 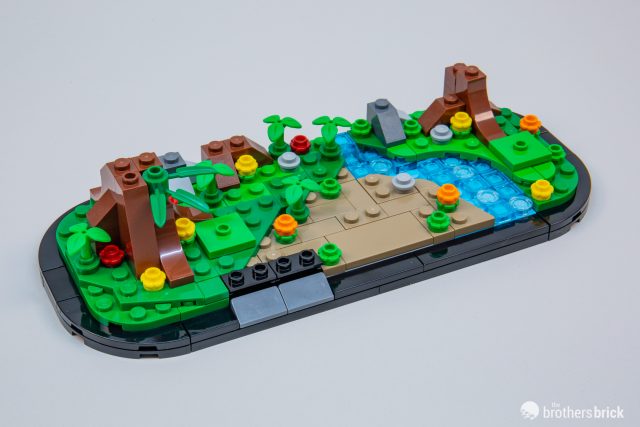 At this stage the only thing left to add are the tree tops and sign, so let’s skip ahead to finished set.

The complete model and minifigure

This is a very simple diorama, but simple doesn’t mean bad. It captures the Gombe forest with a sufficient amount of detail to look quite nice. The depth of the water is particularly nice. While I would have appreciated a bit more complex techniques, much more detail would have moved this away from the intentional “still recognizable as LEGO” aesthetic that official sets have. Dr. Goodall is surrounded by three chimpanzees on the ground and in the tree. LEGO’s single, immobile chimpanzee design is the one let-down here. The chimp’s design with an arm raised looks very redundant when seen in multiples like this. There was likely no chance of LEGO developing a second mold for the chimp just for this set, but it feels very needed. At the very least, I’d have liked to see one of the chimps hanging from a branch rather than waving its arm. 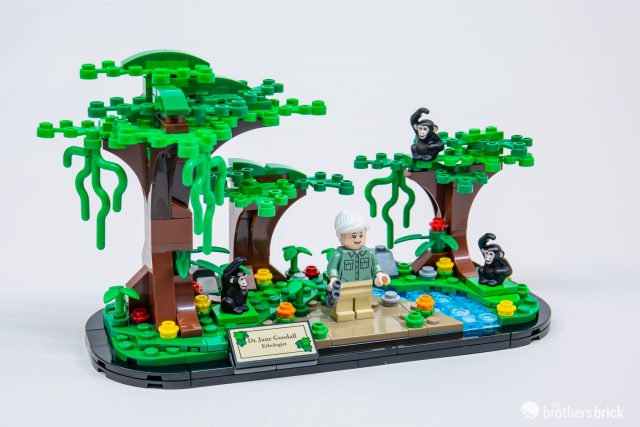 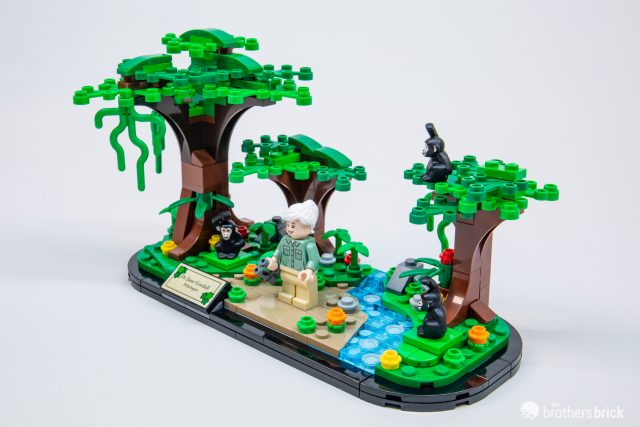 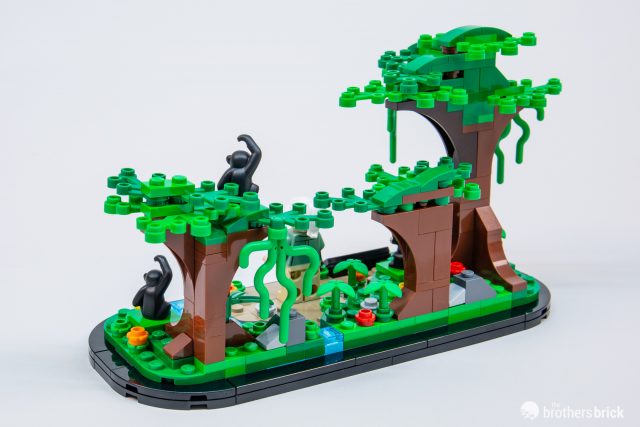 Dr. Goodall sports the set’s only new prints, with a new torso design of the simple utility shirt she’s often seen wearing. And of course, the face print (which is single-sided) is all-new, portraying her as a contemporary figure rather than as a young scientist in the field. The ponytail hairpiece is new in white. Dr. Goodall carries a pair of binoculars. 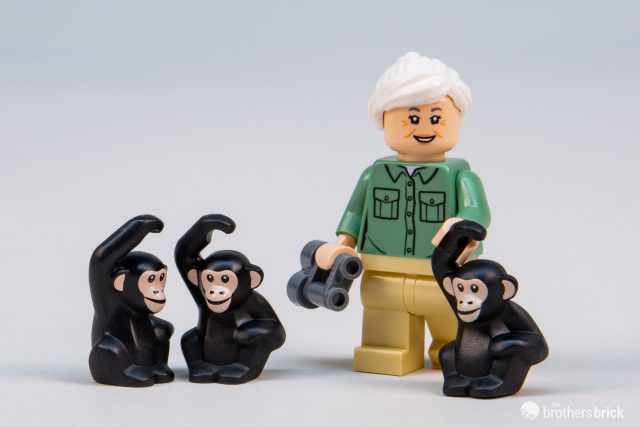 As I’ve expressed in my reviews of the previous influential personality sets, I love that LEGO is taking this tack. While I have no problem with getting another vehicle, microscale building, or whatever else LEGO would do as a Gift with Purchase (and in fact many of those are lovely), there’s far more value in celebrating renowned scientists, pioneers, and authors. As an adult builder, I tend to end up using the majority of sets I get for parts, but this is one that’s likely to stay as a display model. There are no mind-blowing techniques on display here, nor honestly even anything that’s much worth noting at all from a construction or parts standpoint, but I love being able to get a Dr. Jane Goodall minifigure surrounded by chimpanzees. So if you’ve been thinking of picking up the latest line of Speed Champions or maybe that new Vespa 125 scooter, you’ll get a pretty cool tribute set as a bonus. 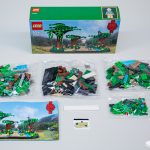 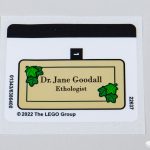 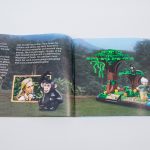 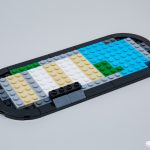 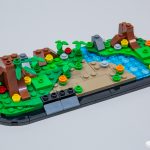 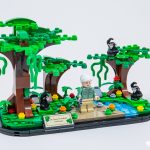 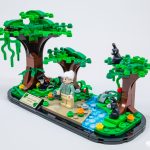 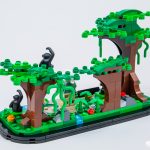 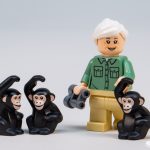 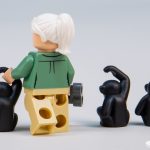 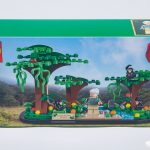 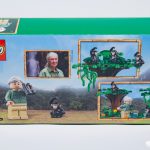