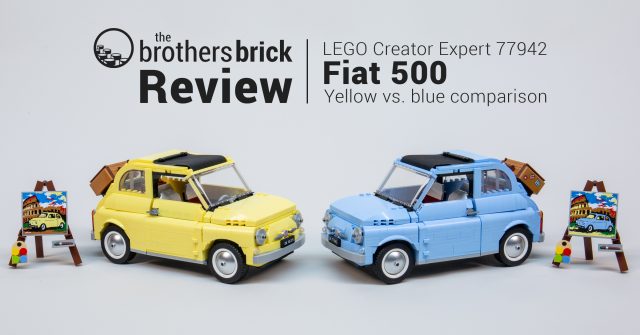 The two boxes are nearly identical, since LEGO just performed some photoshop tweaks on the yellow model to give it its new hue. Our yellow box is a North American box with English, French, and Spanish, while the blue car is the European/Rest of World box, since it’s sold exclusively in the UK. Both sets contain 960 pieces and bear a 16+ rating, since the original packaging just barely predates LEGO’s shift to its LEGO For Adults black packaging and marketing-driven 18+ age rating. This may well be the last set to ever bear the Creator Expert branding. 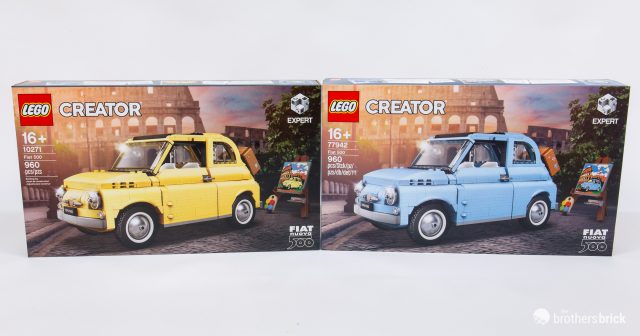 Likewise, the back of the box retains all the same function callouts. 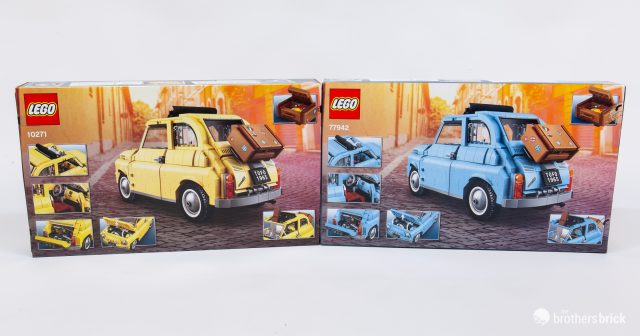 One difference I did note is that the blue Fiat box has glued ends with punch-out tabs to open the box, while the yellow model has sticker seals. Our original review copy of the yellow car was also a European box and it had sticker seals as well, so that doesn’t explain the difference. Personally, though, I don’t have a preference so it’s a distinction that makes no difference. 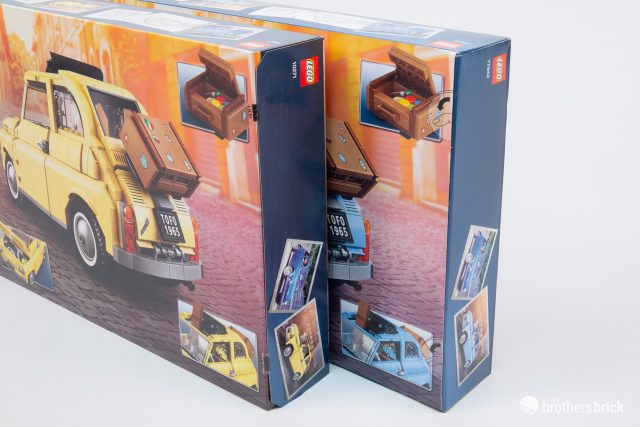 On its face, the conversion is simple. LEGO simply swapped all the 226 Cool Yellow (AKA Bright Light Yellow) elements to 212 Light Royal Blue (AKA Bright Light Blue). The set includes a pretty broad swath of elements in the key color, with 59 distinct elements coming in either yellow or blue. Many of the Cool Yellow elements were unique to the Fiat when it dropped last year, and so too many of the Light Royal Blue elements are unique to the update, as well. Here’s a small sampling of the blue elements. 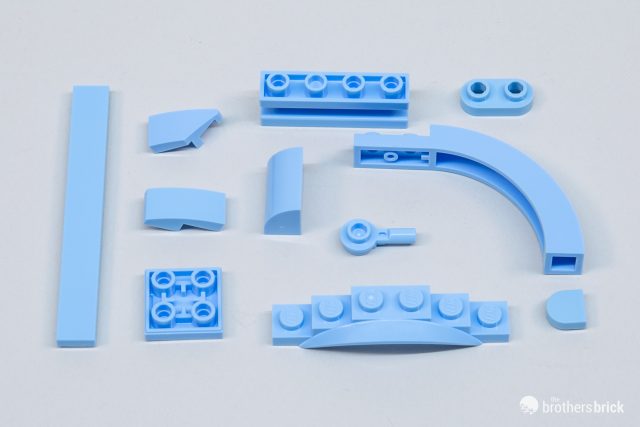 The instructions for the models are identical except for color, so the design of the finished models are the same in every way. Although we didn’t mention it in our initial review, some fans reported color discrepancies in the Cool Yellow bricks on the original. The yellow version I used for comparisons here was just purchased (and so isn’t part of the original production run) but it definitely has some minor color variations. They’re small and unlikely to be noticed by a casual builder, but fans who build a lot of LEGO will notice the small discrepancies, which in some cases appear from brick to brick within the same element. Thankfully, the Light Royal Blue seems to not suffer the same fate, as the color matching is quite consistent. 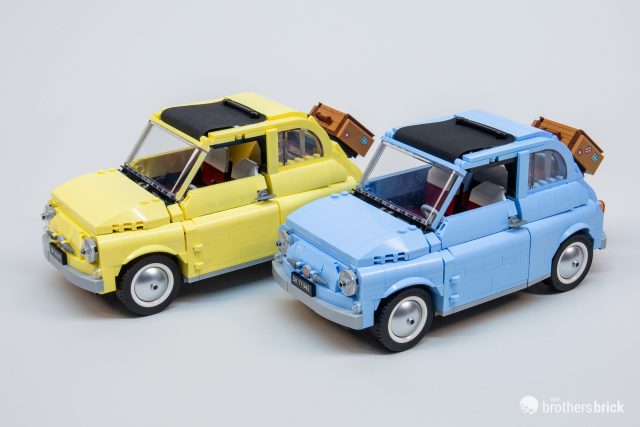 Besides the primary color in the bricks, though, the rest of the differences come from the stickers. The luggage in the back gains a Union Jack sticker, since the set is a UK exclusive. 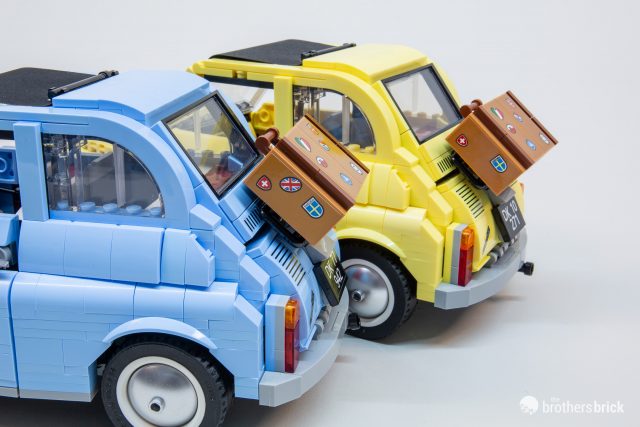 Two of the original license plates styles referenced the set’s number, 10271, so the blue Fiat’s plates have been updated to match its new set number, 77942. An easy opportunity was missed here though to include UK plates for this UK variant. The TOFO 1965 plates are identical on both sets. 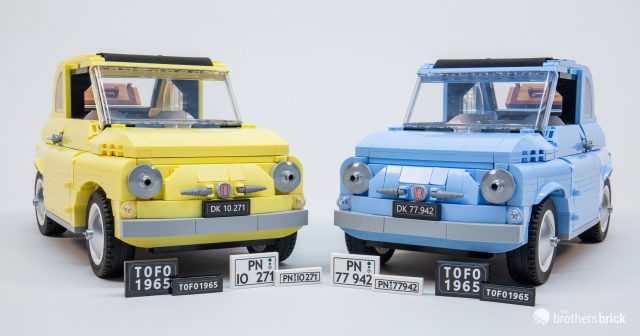 Similarly, it would have been nice if LEGO could have made even more distinction by swapping the car to be a right-hand drive suitable for UK roads. However, I think it’s understandable that LEGO chose to forego that update, for two reasons. First, that would have required re-validating the instructions (a lengthy process), and second, the entire point of this update is to see if a color-swap alone can affect sales, so altering the build (even in a seemingly innocuous way) would spoil that. 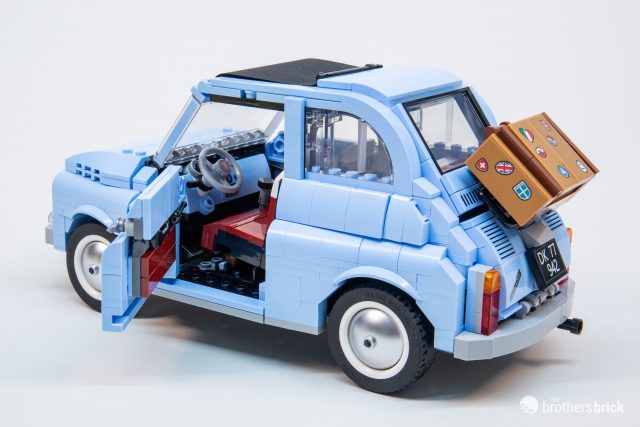 One final difference is apparent in the included painting. The original showed a yellow car, so obviously LEGO updated it to blue. A few other colors in the painting are changed as well, from the shading on the Colosseum to the foreground. Interestingly, the artist’s signature was dropped from the new version. 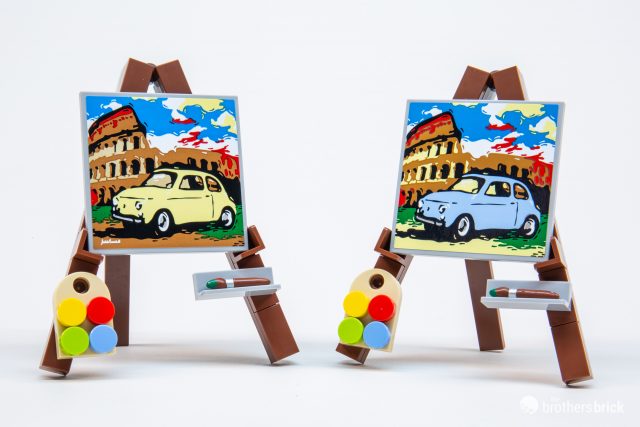 Color swaps on sets have been quite rare throughout LEGO’s history, though not entirely unheard of (e.g. 2148 LEGO Truck vs. 3442 LEGOLAND California Truck). While some of us liked the Fiat’s original Cool Yellow, many of us here at TBB were never fans of that color on the car, and no doubt many other people feel the same way. So an alternate color is welcome indeed, especially when it introduces a new color for a variety of elements. However, I do have some concerns about the way LEGO is handling this. 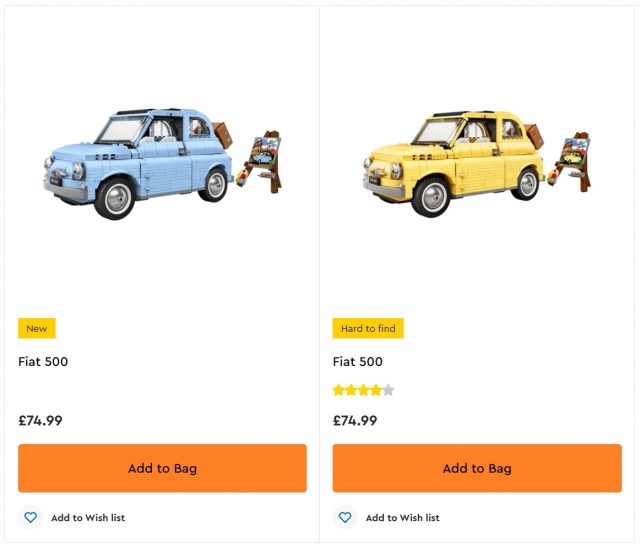 LEGO’s reasoning for introducing this color swap is to gauge how color influences buyers. Would someone be more tempted to spend $90 on a LEGO Fiat if it were light blue instead of light yellow? It’s a great thing to test, actually. The problem is that LEGO’s UK test market doesn’t operate in a vacuum, and LEGO is one of the hottest commodities in the toy market with not just fans but very avid collectors the world over, especially for sets like the Fiat which are marketed to adults. The mere fact that this set is being produced in limited quantities makes it of greater interest to LEGO fans and collectors. The new Fiat could have been rainbow-colored, and as long as the set was perceived as “exclusive” it would draw the interest of many fans and collectors, completely spoiling the data collection of which color is more desirable to the average fan. In fact, when we spoke with LEGO last month about the program before it was publicly announced, we asked LEGO how they planned to account for scalpers and were told that beyond limiting purchases to 1 per customer on the LEGO website, they had no plans in place. Retailer Zavvi did not have even this limitation, and in fact, marketed it as a special “Limited Edition” set—giving further evidence that data gathered from this test won’t be a true representation of which color fans actually prefer.

Secondly, LEGO promised in 2019 to make all regional exclusives available worldwide, either immediately or after a period of exclusivity. However, the sets in this program are to be available in the UK for just two months, and will not be available anywhere else after that period, a direct contradiction to LEGO’s promise. LEGO will no doubt argue that because this was a marketing test it’s different, but that’s little solace to the many fans outside the UK who are unable to get the set.

To be clear, I don’t think LEGO is sneakily trying to do a regional exclusive and just pass it off as a marketing test. I think rather that it was intended to be a real marketing test, but poorly designed and poorly executed such that it is effectively a regional exclusive of a fairly desirable set. The other sets in the experiment—two color variations on a small Creator dino, and two size variations on a City fire station—are of much less interest to the adult fan community and will possibly yield more useful data to LEGO.

It’s a great set, and if I consider only the design itself, I love that LEGO has made it. I like the blue much more than the original yellow, and having both versions is perfect for an adorable little commuter like the Fiat 500. I would love to recommend this set. However, I cannot. Much like we noted a few years ago in our review of the New York Comic-Con Star Wars BrickHeadz exclusives, while LEGO certainly has the right to create rare exclusives (even if they’re ostensibly marketing experiments), they do a disservice to their own fans when they do. After all, as we said about those BrickHeadz, “the vast majority among the tens of thousands of you out there reading this review can never own this set.” And so this poorly executed marketing test only serves as a way to frustrate fans, rather than as a way to gather insight on them.

77942 Fiat 500 (blue) contains 960 pieces and is available exclusively from LEGO UK for £74.99 or from Zavvi (sold out). It may also be available at a markup from third-party resellers on eBay.