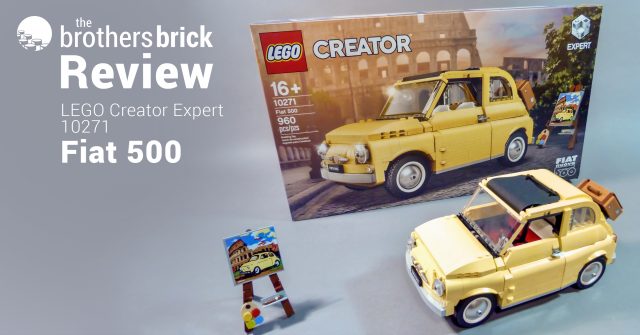 The box, instructions and contents

The front of the box features a handsome photo of the legendary Italian car in front of the equally legendary Flavian Amphitheater (aka Colosseum) in Rome. An artist’s easel, palette and painting features an impressionistic approach to the very same scene because…it is so meta and self-aware. The backside showcases many of the play features including opening cabrio-style roof, doors, rear engine space and trunk up front. The primary photo is a rear view of the Fiat with a well-traveled piece of luggage strapped to the back. The background appears to be a narrow cobblestone road so indicative of European cities.

Once opened, the contents of the box prove to comprise only of three numbered bags (three each section for a total of nine) plus the instructions and sticker sheet in their own bag as well as the individually bagged cloth roof part. Once out of their individual bags, this copy of the book and sticker sheet was a bit bent but the cloth piece was nicely protected against its cardboard backing. The thin 143-page book boasts a fabulously retro cover indicative of the 1960’s.

The first eleven pages continue with a quaint 60’s era retro-mod layout and highlights the history of the Fiat company and the history of the Fiat 500 itself, including the modern redesign in 2012. This particular model proves to be a 1965 edition so the 60’s mod layout was spot on. This section also features a spot on the “la Dolce Vita” (The sweet life) philosophy and set designer Pierre Normandin talking about the challenges of creating such a curvy, compact car in a rare cool yellow.

I was immediately thrilled upon seeing so many pieces in this rare color. The designer calls it “cool yellow”. The description is not so much about sunglasses and a devil-may-care attitude (although the classic Fiat 500 proves to have plenty of that) but rather temperature in relation to other colors on the color wheel. The first photo illustrates how different the color is. The part on the left is from the set while the warmer one on the right is a sample of “regular” yellow from my collection. The second photo highlights just some of the interesting shapes in this color in the first bag alone. Be assured that there are oodles more in this bag and others, too many to cite individually, and it might be safe to assume many are molded in this color for the first time.

In working on the chassis in bag one, it had proven to be your standard Technic and System affair, not too dissimilar from building other compact Creator sets such as the Mini Cooper or the VW Beetle. 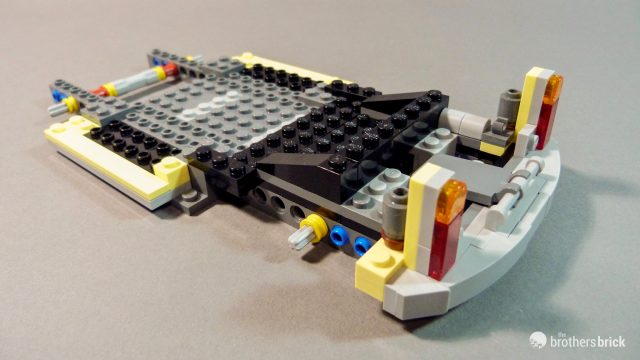 Once installed, the engine proved to be compact and well detailed. 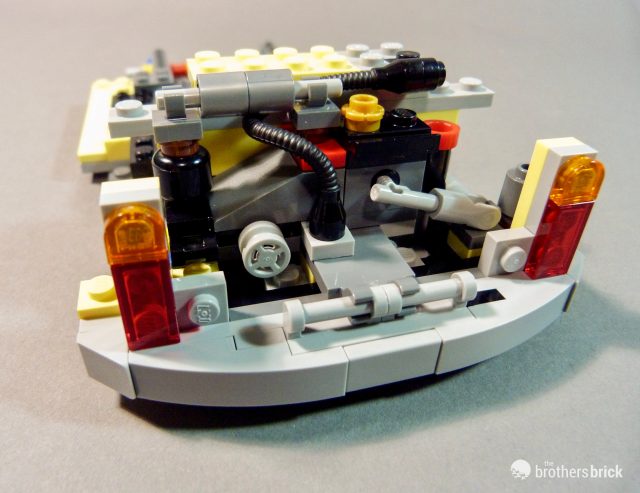 Bag one is complete and fleshes out the rear bumper, hand brake, shifter, rear fenders and the set’s only piece in dark azure. A top view of this assembly proves that the shape tapers in nicely toward the rear and the model is not as slab-sided as I had initially thought.

Bag two once again has me thrilled at the abundance and variety of pieces in cool yellow but here are some rather neat clips in nougat. Alas all the nougat clips become hidden under the seats. Here dark red and white contrasts nicely against the yellow. The front seats lift forward entirely, a feature that makes sense in such a small car.

With bag two complete the model now has a fleshed-out dashboard, opening doors and the rear window assembly.

Bag three starts out with a complex front bumper and curving nose assembly that is a thing of beauty. Here it uses a printed Fiat tile that is like the one on the steering wheel. 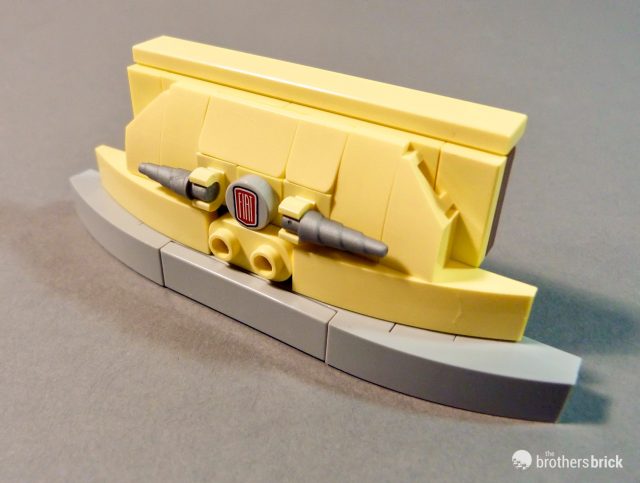 The front fenders taper in just as the rears do. Once installed the hood assembly flows nicely with all the complex curves featured along the nose and fenders. The sloping windows first introduced in the Manchester United set are used again here as rear side windows and fit neatly under the yellow sloping arches. 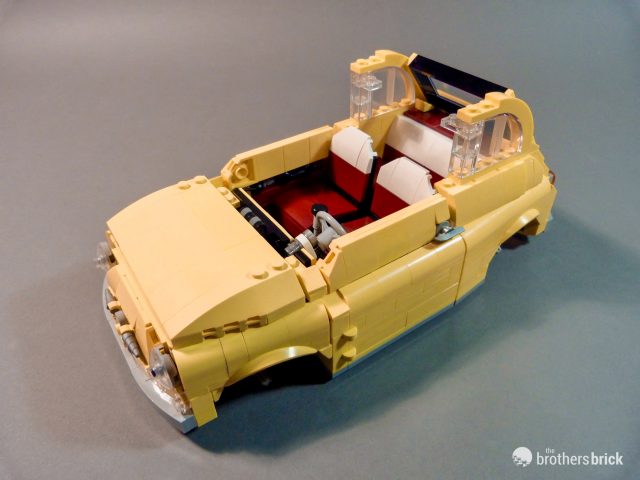 The set offers a choice of three pairs of license plates; one in Italian, one in Danish and the third in German. I used the Italian plates. The next photo features a well-traveled piece of luggage that clicks onto the rear rack.

The last assembly is the artist’s easel. Other Creator vehicle sets have featured surf boards, coolers and picnic baskets as add-on accessories. My opinion is the artist easel is the perfect accessory for this little Fiat 500. The car measures over 11 cm (4.5 inches) high, 24 cm (9.5 inches) long and 11 cm (4.5 inches) wide. The end result is a hip, playful, dare I say adorable model with lots of fun play features. 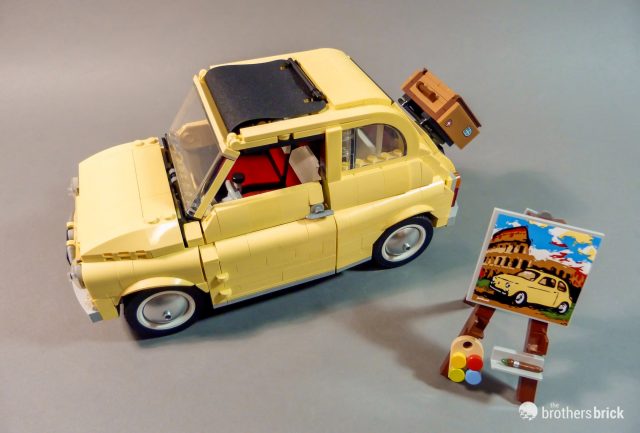 Here are a couple images highlighting all the opening components.

As a car enthusiast, an artist, and a former Fiat 500 owner, this set holds a very special place in my heart. Some motorists want horsepower, speed, luxury or ample room for family and all their belongings. My real-life Fiat 500 offered none of that but what it did provide for me was frequent compliments from strangers, a feeling of elation when I drove it and a sense that I was part of something counter-culture and cool. This model brought back those feelings for me. I could not help but smile as I viewed its many authentic details all the while opening and closing doors and playing with all its features. As with most Creator Expert vehicle sets, this model is faithful to its original source material and looks fantastic on a shelf or in a display case. At under ten cents a brick, this set sits comfortably below average in terms of price point. Had this have been released in a common color my recommendation would have reflected a tone more or less conveying; get one and have fun with it. But LEGO knows that if they produce a set predominantly in a rare color, adult builders in particular might purchase several copies. I will be scooping up several copies in the very near future and I can wholeheartedly recommend you do the same. The imagination soars with other non-Fiat 500 applications using so many of these charming pieces. With that said, this might be a good time to address the yellow elephant in the room.

You may be aware that two LEGO fans submitted a similar Fiat 500 model to LEGO Ideas. It was such a popular idea that it reached the required 10,000 votes in order to even be considered as a potential set. LEGO rejected the submission and then produced a Fiat 500 set anyway. To add further insult to injury, this is not the first time this has happened. While I like the set very much, this factor has plenty of LEGO fans up in arms and I’ve seen some chatter of boycotting it. In LEGO’s defense, I am well aware that, from inception to final product, a LEGO set can take three or more years to come to fruition. The classic Fiat 500 is a superbly iconic car. Whether it be the Volkswagen Beetle, the James Bond Aston Martin DB5, the London Double-decker bus, or the Ford Mustang the Creator vehicles so far have been true icons from both real life and pop culture. With this in mind, the equally iconic classic Fiat 500 was an inevitable set, just as I presume the ’57 Chevy Bel Air, The Back to the Future DeLorean, or the Ford F-100 may likely become official Creator sets someday. I do not work for LEGO but it is quite probable that the Fiat 500 was already in the pipeline when they rejected the LEGO Ideas submission. While this may be the case, it is still a PR problem that LEGO has created for themselves and they may need to, at the very least, think about solutions for negating this in the future.

With that said, I am truly enamored with this set. If you can overlook the blight, the clever detailing, the functionality, and the retro-cool feel of the 1965 Fiat 500 are all top-notch. The comfortable price point and the inclusion of rare light yellow makes this a must-buy for any LEGO fan or car enthusiast. Nixing this would eliminate the chance to experience such a neat set and acquire a myraid of interesting and reusable pieces in cool yellow. However, some folks may still be inclined to dismiss this set and that would be perfectly understandable.

Check out our media gallery below: