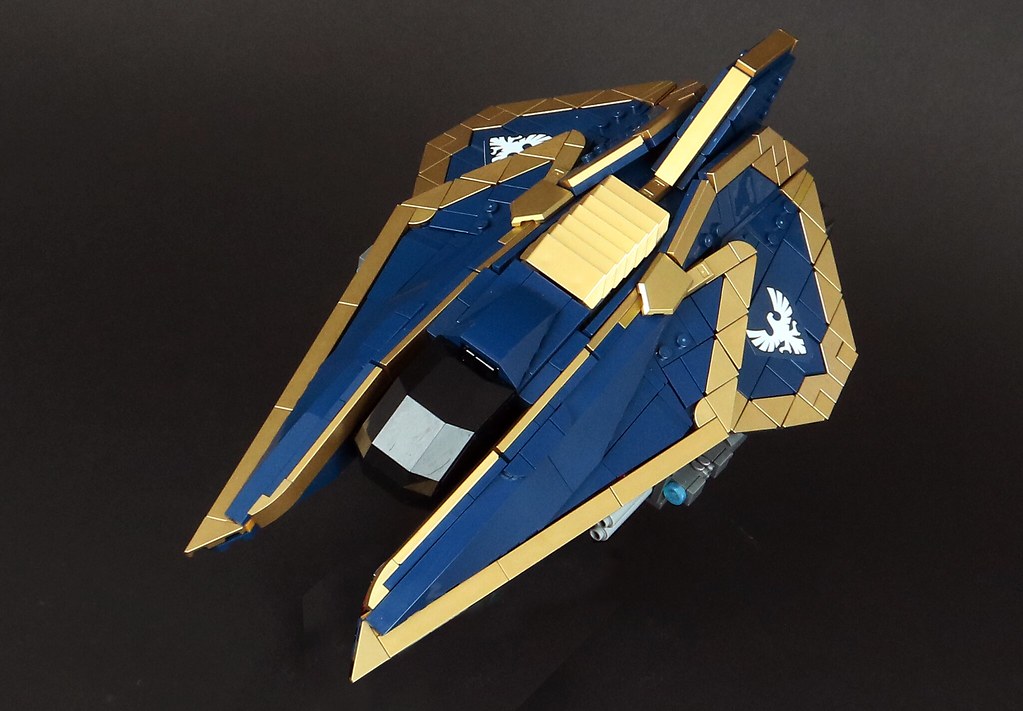 A picture of the side illustrates the layered surfaces that Carter was able to fit together seamlessly. I love the black used to mark the command deck, sandwiched between the two forks of the Vic Viper’s structure. I’m sure the inner workings of the model are a mess of hinges and joints in order to achieve the various angles of the fins and stabilizers. The back vertical stabilizers are interestingly built, with angled plates and tiles lining the outside on all sides. These are the main divergence from the Hiigaran design as the original ship didn’t have these at all. The angles of the gold 1×4 tiles really intrigue me and make me wish I could build my own just to see how it all fits together. 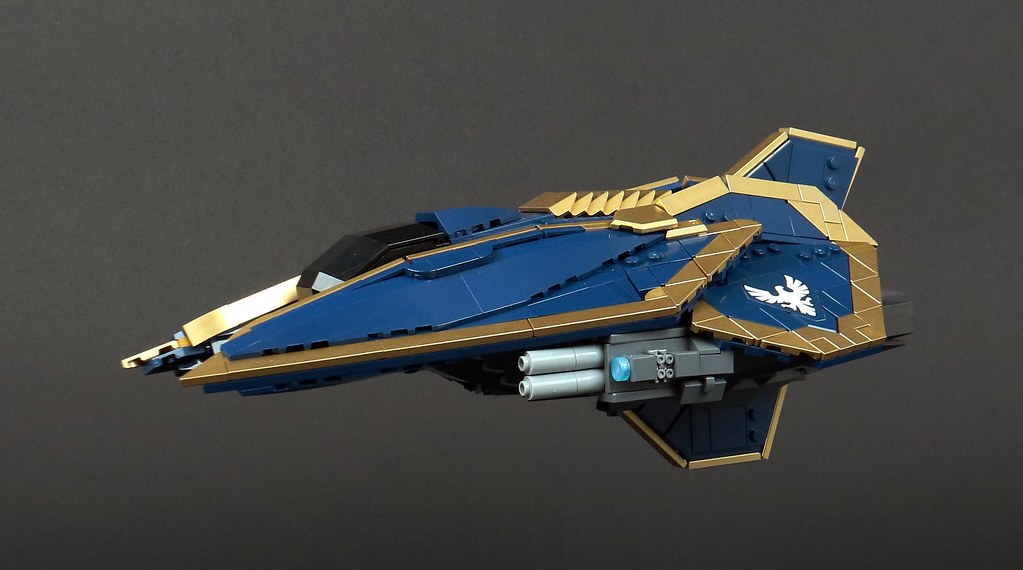 Carter also gave us a peek at the back, letting us see the boosters and engines. Trusty binocular pieces are sandwiched on their side to form the boosters while shell armor plates are attached by clips to form the nozzles of the main engines with bucket handles clipped between for detail. The red glow shining through gives the illusion of the engines being idle, and I love it. Notable here, as is it is in other shots, is also the section of layered golden vehicle spoilers behind the control deck. 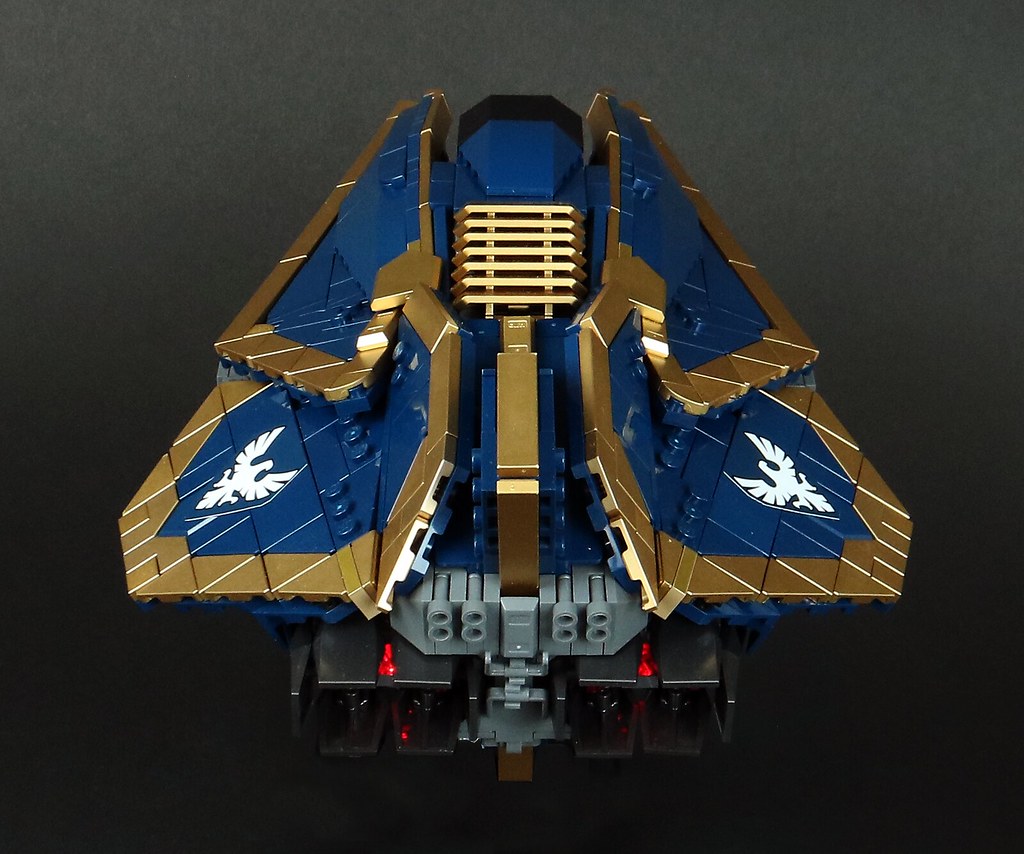 Finally, let’s look below at the greebly, detailed undercarriage. I love the silhouette in this shot. As you may have noticed, Carter used a lot of techniques to provide as many smooth surfaces as possible, attaching pieces upsidedown or on their side to fill out the model. This is extremely evident in this shot when you take a look at all of the different orientations of the multiangled sections. The back dark bluish grey section by the engines utilizes more of the angled tiles that show up everywhere in this build, including the inverted ones used in the intake grills at the base of each fork. The guns are also tightly built, and the different greys perfectly contrast with the dark blue and gold of the rest of the ship. A tile wedged into a clip and some stacked rollerskates help add extra detail to the weapons. 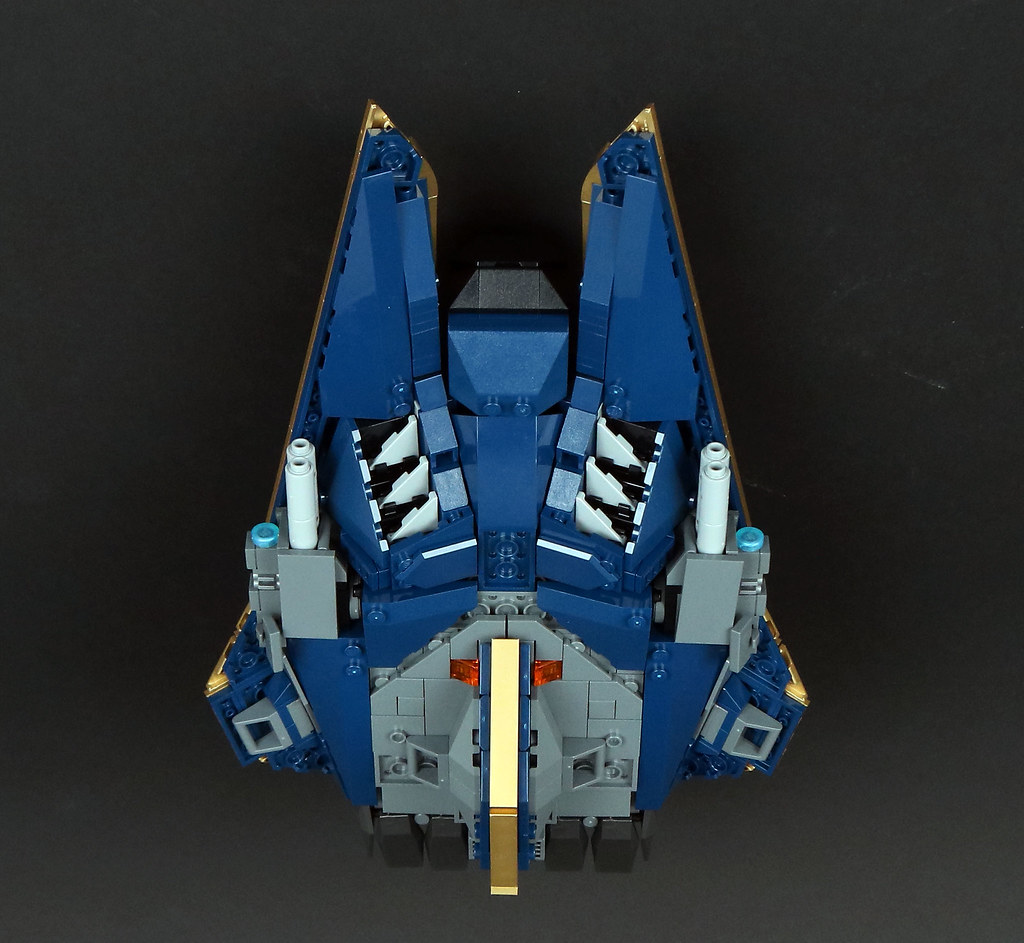 Thanks for visiting the hangar and checking out this regal model. If you like this, you can stick around and check out some other spaceships or some more designs by Carter Baldwin that we’ve covered in the past.