Back in 1994, the LEGO Space Police had to deal with one of their most challenging foes in the form of SPYRIUS, an intergalactic band of espionage agents who specialized in stealing the technology of more peaceful citizens in the United Galaxies Space Council. Now, in 2021, Spyrius has finally gotten a taste of their own medicine thanks to builder Moppo!, who has managed to steal some technology from Spyrius and used it to create this custom LEGO creation, a modern update on the Saucer Scout. 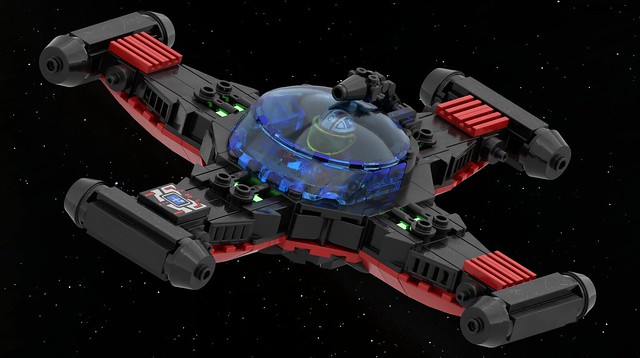 This version of the vehicle is larger, but it hasn’t lost the feel of a smaller ship perfect for recon missions. It’s still got those perpendicular engines, ready to blast the ship off in any direction, in case it needs to make a quick getaway from Space Police patrol ships in the area. The pops of lime green near the cockpit are a great compliment to the traditional red and black color scheme. And, of course, it’s not a real Spyrius set without that trademark printed tile.