The LEGO Company is well-known for its excellent customer service. The products are generally high quality, and when errors occur they are quick to issue replacements. However, we recently encountered an unfortunate scenario that left a bad impression. While many of the products we review are provided for us by LEGO itself (which doesn’t mean, of course, that we always give them positive coverage), just like most of you, we also buy a lot of LEGO through regular retail avenues. That’s where I come in. My name is Chris Doyle, and I’m a contributor here at The Brothers Brick. Frequent readers may also recognize my name from the LEGO Art super hero mosaics I’ve been building lately. It’s fair to say I’ve spent a lot (a lot a lot a lot) of money on LEGO mosaic kits and related parts over the past year. When LEGO announced their new 40179 Personalized Mosaic Portrait kit, I quickly found an excuse to buy it. But what do you do when the 6,002-piece set you order arrives and it only has 4,502 pieces? Somewhere along the way, LEGO substantially changed the number of pieces included in this set. Here’s my experience. 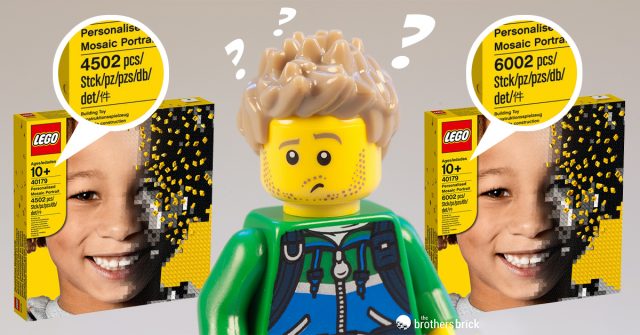 This story begins on February 1st. The Pirate-themed VIP coin offer had just gone live, and I wanted to make sure I got one. But since you have to attach a VIP redemption to an order, I had to buy something. As usual, I wanted to get more parts to make my own mosaics. Unfortunately, the great parts-pack of the Harry Potter Mosaic set was out of stock. “No worries,” I thought. “There’s that new ‘Personalized Mosaic Portrait’ set. It uses square plates instead of the round elements in the Art sets, but I might want to try out a ‘standard’ plate image in the near future. $130 USD is more expensive than the Art kits, but it comes with 6,002 pieces, so it’s still a good deal.”

When I got the kit, I was in for some disappointment. First, my VIP coin’s case was all scratched up, thanks to the tissue-paper wrapping they ship in. But the bigger problem came to light when I was talking with my wife about the bulk plate in the mosaic kit…and noticed something shocking. The part count on the box was 4,502, not 6,002. That’s a 1,500 piece difference. The set is mainly 1×1 plate in five colors – black, white, yellow, dark grey and light grey. (For the curious, the other two parts are a brick separator and a grey baseplate.) So I was expecting 1,200 of each color, but the set only had 900 of each.

“This can’t be right,” I grumbled. “I know it was 6,002 parts on the site. I did the whole ‘price per part’ thing to try and see if it was better to get this or another Beatles art set.”

So I went back to the LEGO site, and sure enough the set information showed 6,002 pieces. But then I noticed the set picture showed a part count of 4,502. I fired off a few emails to customer support, and left a review on the site pointing out the problem. Here’s what the page looked liked when I checked on it on the 7th. 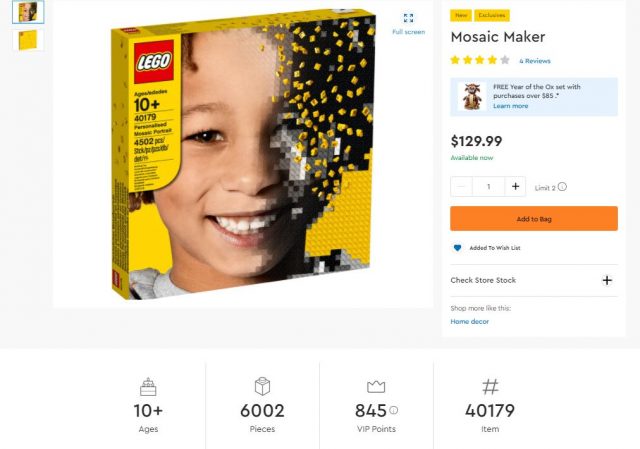 And then things got really weird. I was discussing the situation with fellow Brothers Brick contributor Edwinder Signh. It turns out he had downloaded visual assets for this set directly from LEGO around the time I ordered the set on the 1st, in preparation for writing an article about the mosaic software associated with the kit. And the picture of the set that was on LEGO’s site when I placed my order? It showed 6,002 pieces, too. I hadn’t made a mistake or misremembered the listing – it was changed. Unfortunately, I had just assumed I’d misremembered the box art when I emailed LEGO and left a review. 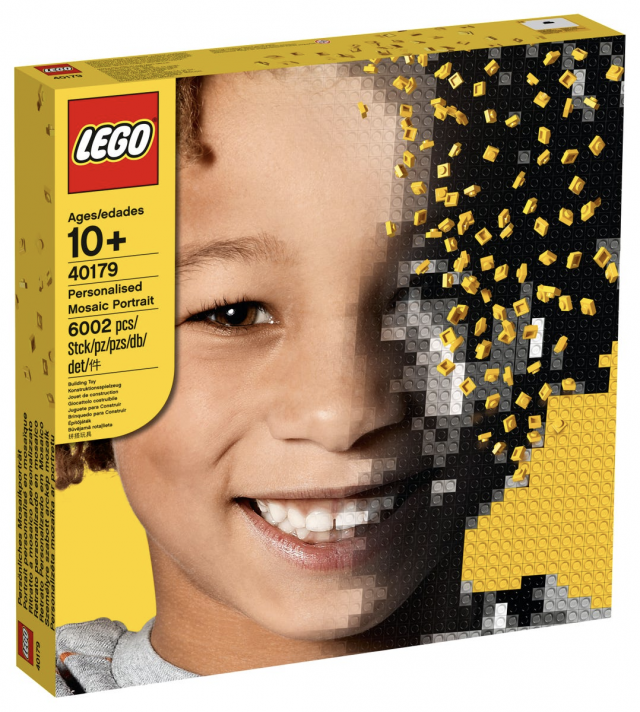 On the 9th my review went live – with still no response from LEGO (nor had I received a response to my emails–perhaps a result of the customer service delays that LEGO has been struggling with for the past several months). Note I still gave the set two stars. Even in my disappointment, I couldn’t completely pan the set.

With no direct response, I decided this was important enough to try and ping LEGO a different way. I wrote a very grumpy Instagram post and tagged their social media team. But my personal Instagram account is a small one without much clout, so once again it went without notice from LEGO. 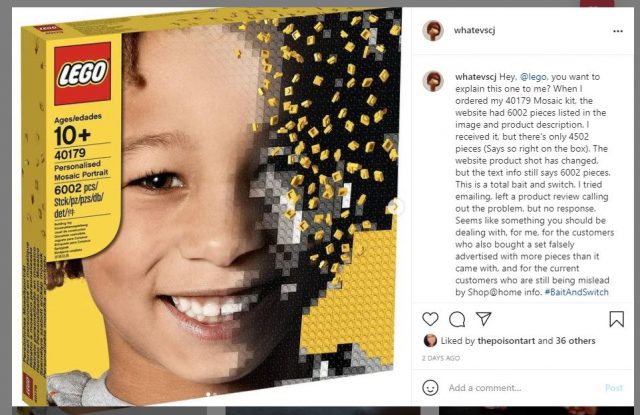 Then, on the 11th, things got even more wonky. LEGO replied to my review, clarifying the expected part count. (I’m not sure why the timestamp on the response is backdated; maybe internal comments have to go through a review process before they go live on the site, too.)

Interestingly, they also updated the part count–to 4,702! That’s still wrong, of course, because the set actually contains 4,502, as shown on the updated box. 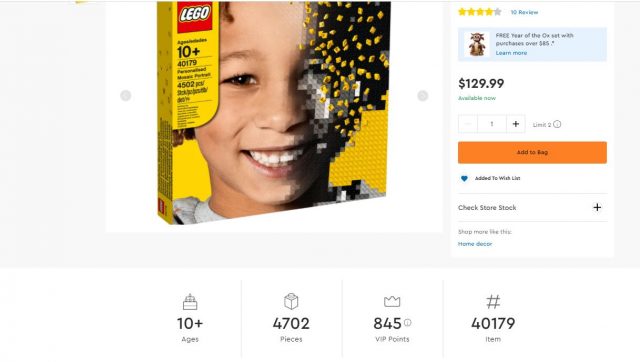 Why was this such a problem for me? Because the core draw of this kit is the parts. When you buy a model of an object–say, a Space Shuttle–and LEGO changes the design or gets the part count wrong, when you open the set and build it you still get a Space Shuttle. In this case, however, the set’s entire purpose is a parts pack. It’s not a set designed to build a specific object; it’s a kit designed to provide you the parts to build your own thing. The parts (and their quantity) is literally the most important thing about it.

At the time of this writing, I still haven’t heard back directly from Customer Service on this, and the part count on the site is still showing 4,702. This experience is really odd, and out of character for the great support LEGO has always given me in the past. If this were just a few parts I wouldn’t be so concerned. But for those of us who bought a set expecting 6,002 pieces, that’s a 1,500 part count difference, or about 25%. This is false advertising on LEGO’s part, and they need to address the problem.

To me, there are several key things that need to happen.

In all of the above interactions I was acting as “just” an adult LEGO collector. (I didn’t bring up my association with The Brothers Brick to try and earn some sort of special treatment.) However, before this article was published, The Brothers Brick editorial team did reach out directly to LEGO for a comment. This is the response we’ve received so far.

[…] the issue was reported [to LEGO Customer Service] on Feb 6th, and while in communications with customers they have communicated the correct 4,502 piece count in the reviews section of the product page, an error is still showing the incorrect piece count on the site. We have requested they reopen the issue to resolve this, thanks for bringing it to our attention.

Update, Feb. 19: LEGO has provided us with a further response:

Thanks for getting in touch about the piece count listed on our website for the LEGO® Mosaic Maker.

Almost every LEGO set includes some extra pieces and the Mosaic Maker is no different. While the number of pieces on the box is shown as 4502, you’ll find the actual number of pieces is closer to 4700. We’ve included significant overfill because we know small pieces can easily go missing. We’d rather you have them on hand instead of having to search for them later.

We’re sorry for any confusion and for having the wrong number of pieces shown initially. It was never our intention to mislead or misrepresent what you’d receive. There was a mistake in some of our data and we’re taking the steps necessary to correct it.

Update Feb 21: Shop@Home has updated the product listing and details to show a 4502 part count.  They have also updated the Specifications text:

Creative people will love turning their favorite photos into awesome artworks with this LEGO® Mosaic Maker building kit. Upload a photo to the Mosaic Maker experience on LEGO.com and receive digital building instructions. The builder can then enjoy some quality time creating a mosaic version of the photo with 4,500 1×1 LEGO plates . There’s no limit on the number of photos that can be uploaded for building instructions, so the mosaic can be rebuilt unlimited times.

Update Apr. 5: After a month of silence, I decided to ping Customer Service again. This time my email was responded to the next business day, and I think we’ve reached a positive endpoint for this whole kerfuffle.

Thanks for getting in touch about the piece count listed on our website for the LEGO® Mosaic Maker (40179).

Almost every LEGO set includes some extra pieces and the Mosaic Maker is no different. While the number of pieces on the box is shown as 4502, you’ll find the actual number of pieces is closer to 4700. We’ve included significant overfill because we know small pieces can easily go missing. We’d rather you have them on hand instead of having to search for them later.

We’re sorry for any confusion and for having the wrong number of pieces shown initially. It was never our intention to mislead or misrepresent what you’d receive. There was a mistake in some of our data and we’re taking the steps necessary to correct it.

Since I’m not able to send you the parts, I’ve added 3,250 VIP bonus points to your account. This equals out to a $25 discount voucher.

Let us know if you need anything else. Have a brick-tastic day!

So, there you have it. After a lot of drama, LEGO customer service came through for me in the end. This is the sort of response that I’d seen in the past, and I’m happy to see things are returning to that high level of service.

If you had a similar experience with this set, I suggest dropping LEGO a line and see if they can work things out with you, too.

24 comments on “LEGO 40179 Personalized Mosaic Portrait: downsized, but not in a fun way [Feature]”