There are times when a LEGO fan starts building, gets into the groove of things, then finds it hard to stop. Especially when the build is a small street that keeps growing with each mini modular building placed on it. When I (Mansur “Waffles” Soeleman) attended my LUG‘s (LondonAFOLs) monthly meet-up via Zoom, the theme was mini modular buildings. Every year since 2007, LEGO released a large modular building, each of which can be arranged into a street layout. As a fifth anniversary to the lineup, LEGO created a microscale version of the first few buildings. I started to build a micro modular for the meet-up, and then I couldn’t help but build more. A few days after the meet-up, I ended up with a whole street. 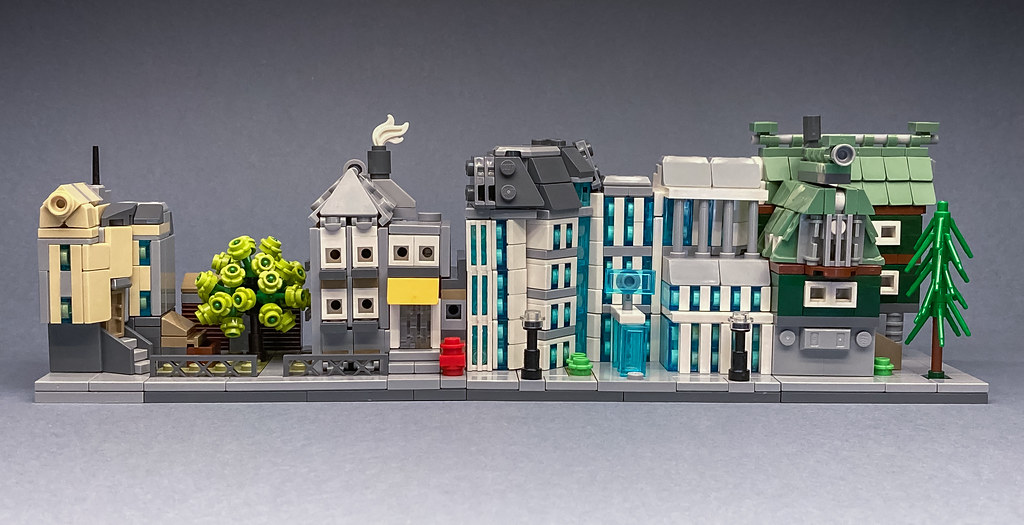 I started building before the Zoom meet-up, as even something small takes a long time for me to perfect. Like with many creations, I begin by experimenting with parts and building techniques. I managed to create a 3 stud wide section of a house that utilised complex LEGO geometry: the half-plate thickness of 2×2 flags separate two mirroring sections of a column of windows flanked by a plate thick wall. On top of that, I achieved the hip roof via a triangular road sign and wedge plates attached by a 45º minifig posing stand. Because of the core parts, I named this building Greyflag Estate, inspired by common English and Scottish council buildings. 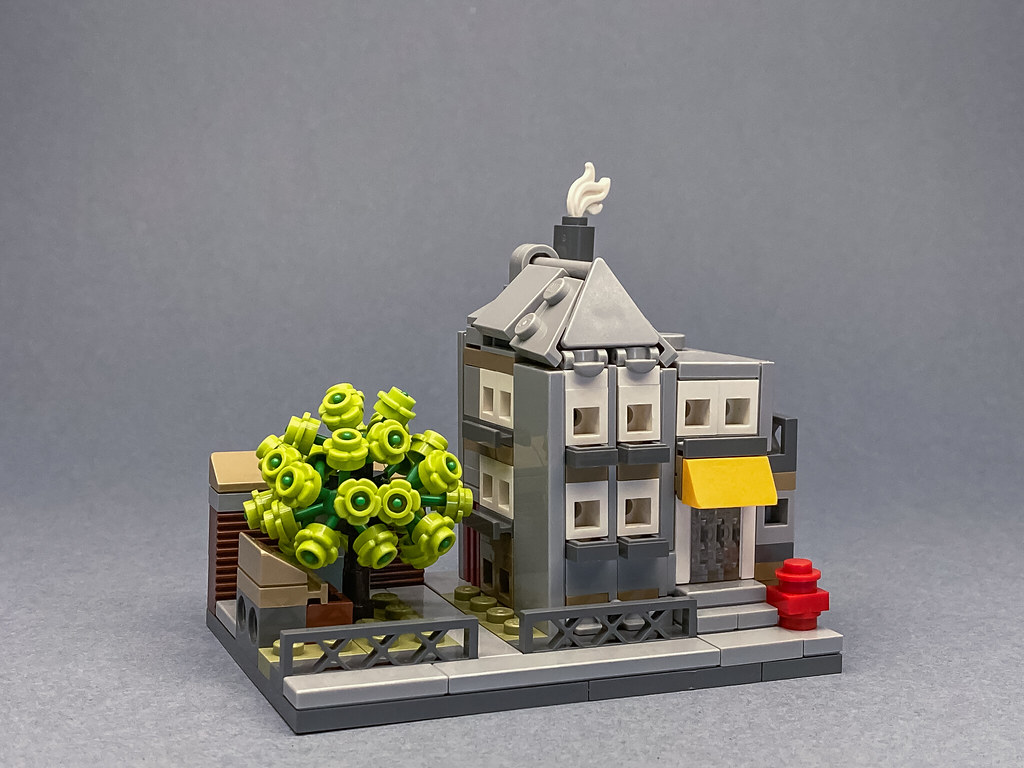 I built a small and simple modern office during the meet-up, with sideways plates for the tall vertical windows. Dissatisfied with it, I improved and expanded it with an angled section and fiddling with a complex roof assembly. I left a bit of sidewalk space in the middle inspired by the trends of plazas of modern office buildings. With the tall windows encompassing the whole building, I made sure to create a visual variety with the angles, offsets, balconies, and different heights – which is what the international style of modern architecture does nowadays to keep buildings from being boring. With a white and transparent light blue colour scheme, I named it Fangar Plaza – a Legends of Chima reference. 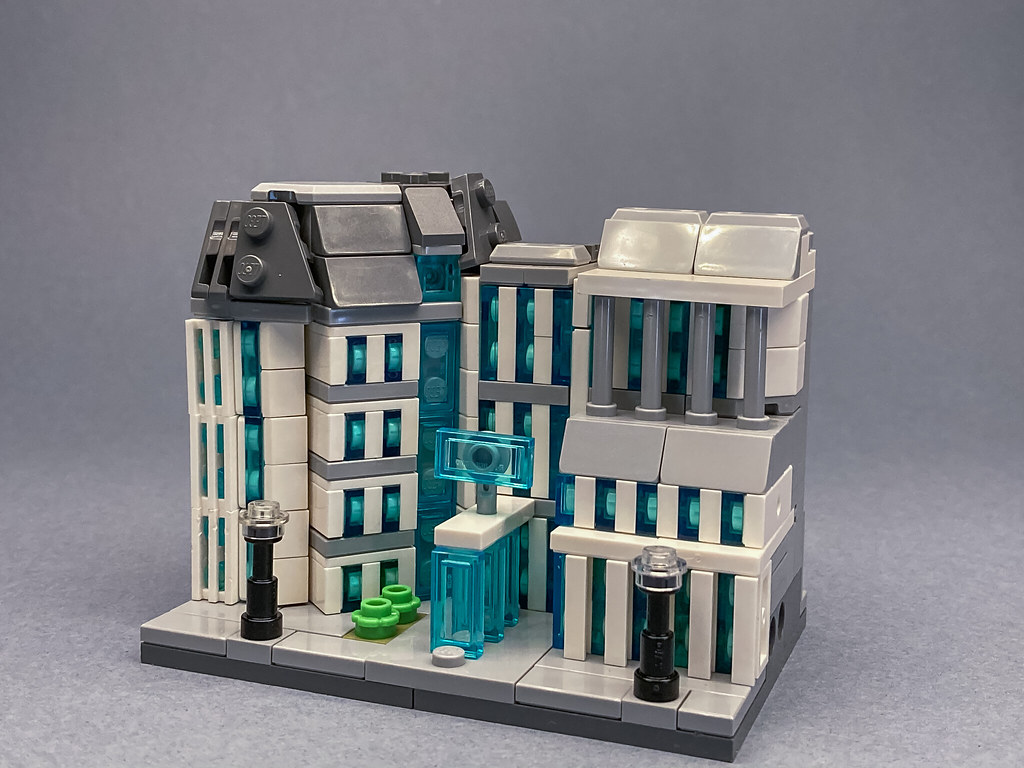 At this point, I was on a roll, wanting to build more and more. The third building began by recreating a tiny stair technique by builder Oscar Cederwall. I had a particular look for this corner building in mind – a medieval style that is common with many English pubs. I wanted to break up the monotony of the icy and stony colour schemes of the first two buildings with something green, as well as add a large tree on the corner. Thus, the Pine Corner Inn was born, with a distinct alpine look. As simple as this looks, I packed the top half with unconventional connections for a smooth roof. 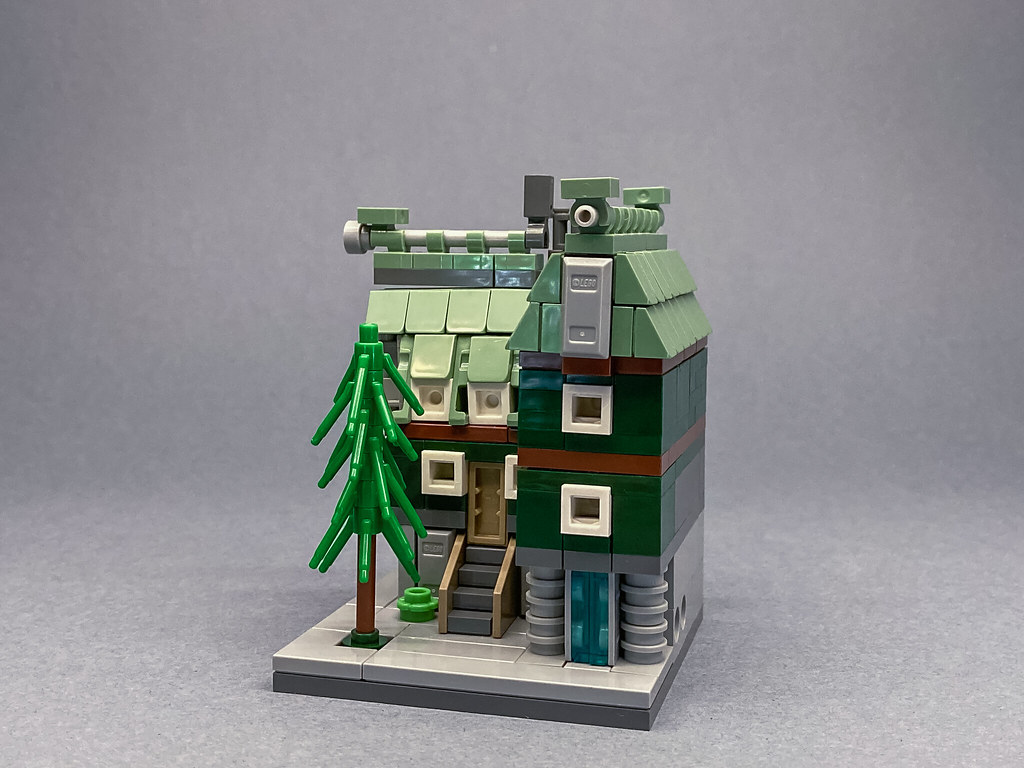 I reached a point where I needed to stop building. I decided to finish with a smaller building – a half-building like the ones in the official Bookshop set. Once again, I experimented with Oscar’s microscale stairs technique, but this time at an angle. That created the difficult challenge of matching the angle of the door and the surrounding walls. Another challenge was to cover up the complex angled structures with the SNOT walls – all within a very confined space. Being a narrow house, I didn’t have anything special to title it other than an address, so I used it to name the street: 107 Jumper Road. Only towards the end did I realise that this building resembles those in Edinburgh’s Old Town. While completely unintentional, I assume the architecture of my current location must have entered my creative subconsciousness… 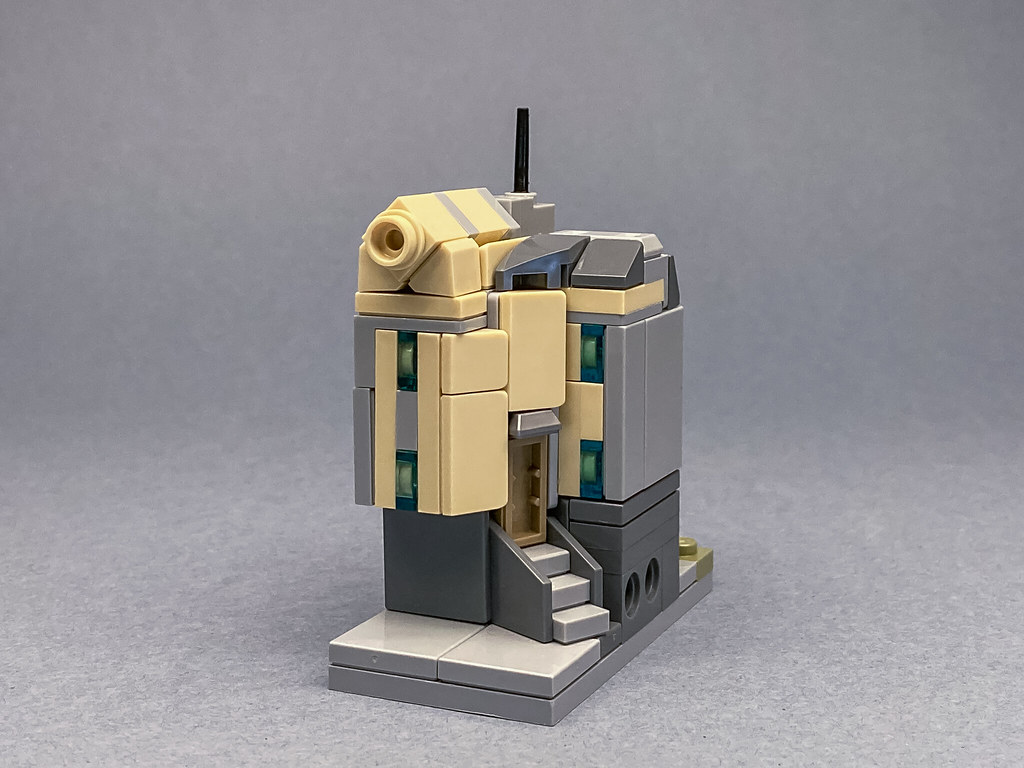 Explaining a build process is difficult for a builder – especially with intricate details and complex techniques – so I’d rather let pictures do the talking. I have provided build breakdowns in a Flickr album for fellow builders to examine.

1 comment on “There’s a house on my street, and it looks real neat”