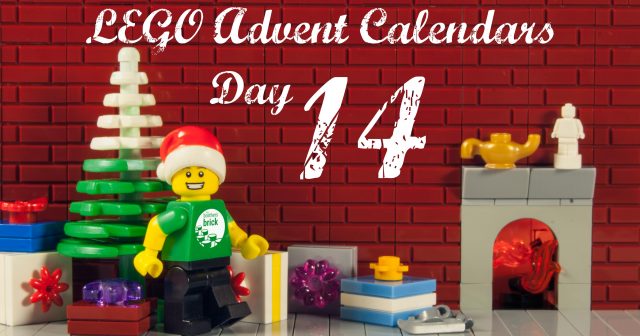 This year we have new Harry Potter, Star Wars, City and Friends advent calendars to open. We will be sharing images of the new calendars every day through Christmas, and hope that you’ll join us! Let’s see what there is to open on Day 14.

Starting off the day, we have a holiday-themed chocolate frog stand from Harry Potter and a battle droid from Star Wars. 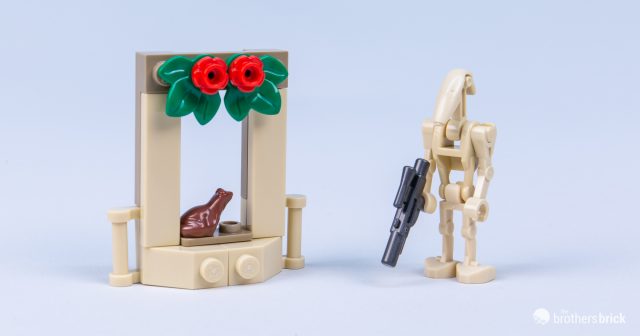 Adam: This battle droid was born nearly perfect. Just one minor change in the 20-plus years since he originally showed up in 1999.

Benjamin: Now that would be a scintillating conversation to overhear: “Ribbit?” “Roger, Roger.” “Ribbit?” “I said, Roger, Roger!”

Bart: But, soft! what light through yonder window breaks? It is the east, and the frog is made of chocolate.

CJ: I wondered about the balcony/window design back on day 12. I just realized that the bars on the side will let them clip onto either side of the fireplace from day 11. Suddenly things fit together in a pretty satisfying way. The chocolate frog is a nice addition that even a Muggle like me can spot. Another holiday point for the greenery, too. The Star Wars battle droid is…well, it’s a battle droid. Good for spare parts, if nothing else.

Lino: For reasons known only to us, we anticipate seeing an uptick in poo-related LEGO creations right after mid-December.

Ed: Battle Droid: Hey Frog, Did you see a Porg here a couple days back? (Day 12) Frog: These are not the Porgs you’re looking for, move along. Battle Droid: Roger Roger.

When the going gets tough, get into the off-road rover from City’s advent calendar. Joining us is a wind-up penguin toy from Friends. 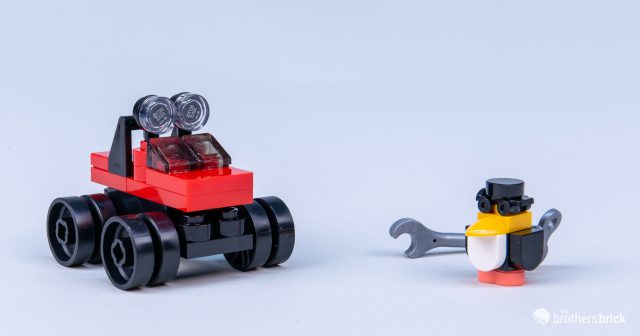 Ed: Monster Truck is a win.. and I seldom get to say this to LEGO Designers, but NPU for the penguin indeed!

Lino: He was short, surly, usually pretty disagreeable. Some said he was a mechanical penguin. But one thing for sure is Dwight really knew his way around monster trucks.

Bart: The monster truck sure is sweet but that is a mechanical penguin wearing glasses. And that is a win for me!

Jasmine: Hmm penguin mechanic or mechanical penguin? Either way, with the extra parts, an extra travis brick and tooth plate, you might be able to scrape together another penguin friend to make this build feel more like a build… But that’s a sweet monster truck for the City calendar, no doubt about it.

CJ: This is my favorite City mini-vehicle so far. A monster truck is an unusual choice, and the shaping works really well. The Friends set is the usual mix of “cute” and “heavy sigh inducing”. The Porg-like mechanical penguin build is silly and fun. The roller stake as a hat/eyes works well from the front. (Although from the back it must look a little iffy)  The wrench implies this is another “toy building station” day, but where’s the stand like we saw on days 8 and 11? The three parts needed for the table would have at least added to the workshop feel. But, as is, I’m grumpy enough to not give today a holiday point.

Chris: Maybe I’m in the minority, but I adore this penguin, not because he’s cute, but because he looks like what we’d find on Day 14 of a LEGO Batman Advent calendar. I don’t see the hat as a top hat, but rather as a short bowler, which everyone knows is more sinister. 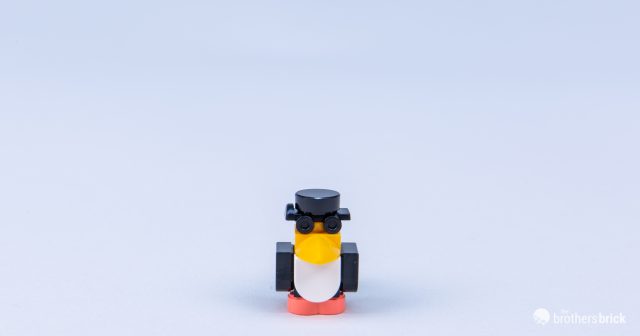 Chris: He sees you when you’re sleeping…

What a fantastic set of builds we opened today! Come back again tomorrow as we reveal what’s inside door number 15. Merry Christmas and happy holidays!