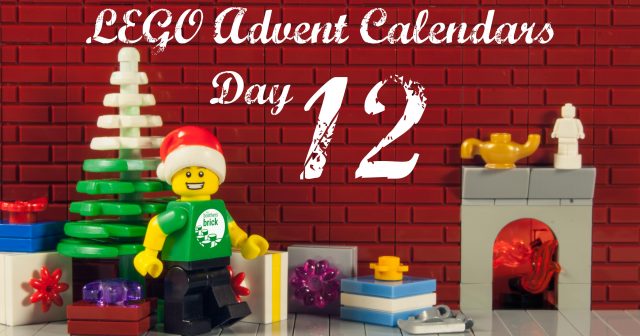 Thirsty? Today’s Harry Potter advent calendar brings us a bar with a drink, while the Star Wars build is an adorable little porg. 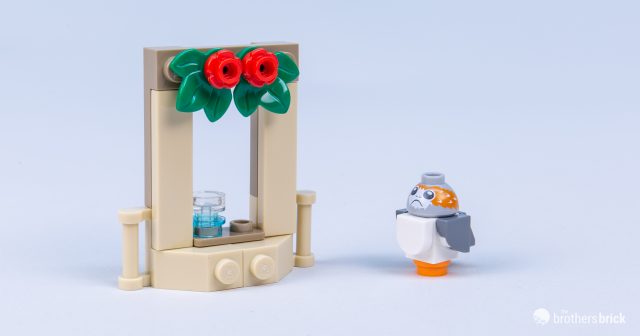 Bart: This poor Porg was ready for his balcony moment, but his Juliet didn’t show up… Poor Porg.

CJ: I’m going to go with a hint from Bart and describe this as a balcony of some sort. Lacking context, it’s hard to figure out how it should be incorporated into the growing Advent scene – sitting on the ground it seems more like a puppet stage. But Potter still gets a holiday point for the greenery. The Star Wars porg is great for army building, I guess. That’s a thing, right? Porg armies?

Lino: Peter the Porg thought opening a holiday egg nog stand would be a good idea. But then again Peter is a Porg and most of their endeavors end up as a Wookiee’s dinner or some other unfortunate demise. It’s their own fault for being delicious. And stupid.

Benjamin: If only that were a cup of green milk, the porg would be smiling. But Peter doesn’t like water.

Ed: Porg got stood up at the altar on his wedding day. Just coz LEGO couldn’t give us two Porgs in the Advent Calendar to complete the scene.

Time to choo-choo on to the next builds, which happen to be a train from City and a skateboard from Friends. 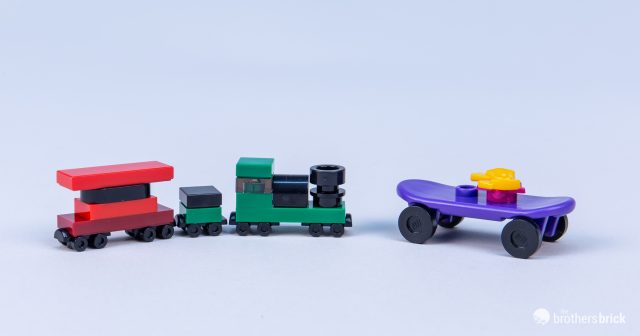 Benjamin: The train seems out of scale with the fire truck and microscale buildings, but it’s still nice. And at least they put a bow on it, right, Bart?

Bart: And the award for laziest gift wrapper goes to the person who gifted this skateboard.

CJ: City has a cute micro train build, with a different engine construction from the Friends version seen yesterday. It’s nice to see some internal diversity in the calendars. Some nice parts for re-use here. Friends takes another dive, though, with a skateboard with a bow stuck on it. Low part count, and generally yawn-worthy. I will begrudgingly grant it a holiday point for the bow, though.

Lino: One will get you there. The other may see you endure a gnarly faceplate and a credit-carded gooch in front of all the other kids. Choose wisely.

Chris: I have to say, that little train is pretty awesome. I’m continually amazed that LEGO finds new ways to build microscale trains, and they nearly always look great. The stacking with the rounded 1×2 plate to fit the 1×3 tile is quite clever. The skateboard is….not much on its own, but I guess OK with other the minidolls.

When combined, you get the best thing any porg could ever want for Christmas. 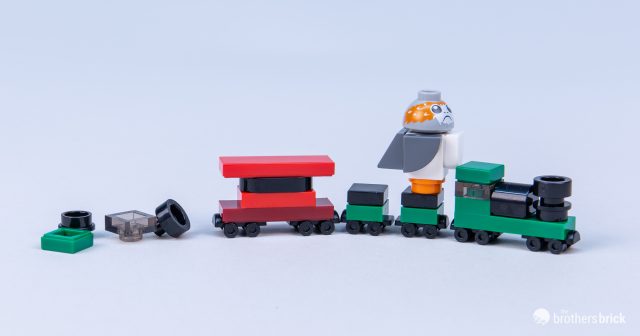 Benjamin: Every Porg knows that the fastest way around Ach To is by the green milk train.

Chris: If you look closely here, you’ll notice that the train gained an extra tender. That’s because this day came with enough spare parts to build a complete extra car, and still have all those other pieces left over! You could almost build two extras!

Time to chug on over to Day 13. Thanks for joining us today for another 2020 LEGO Advent Calendar build!