Today LEGO and IKEA revealed the BYGGLEK product line, more than two years after we first brought word of the collaboration between the two Scandinavian companies. The new product line promises to alleviate the organization of after-play with LEGO elements and provide a storage solution. Four products offering various size storage boxes are being introduced. LEGO says the heart of the collaboration is developing a system where kids are able to experience a quicker way to engage in continued play with LEGO bricks after a pause or break in play. The goal, LEGO says, is that this results in a storage solution that can cater to an intertwining concept of play and storage at the same time. With IKEA’s vast portfolio in furniture and home products, the BYGGLEK blends in with also being a unique decorative piece of storage, matching themes of IKEA products that are already on shelves today. 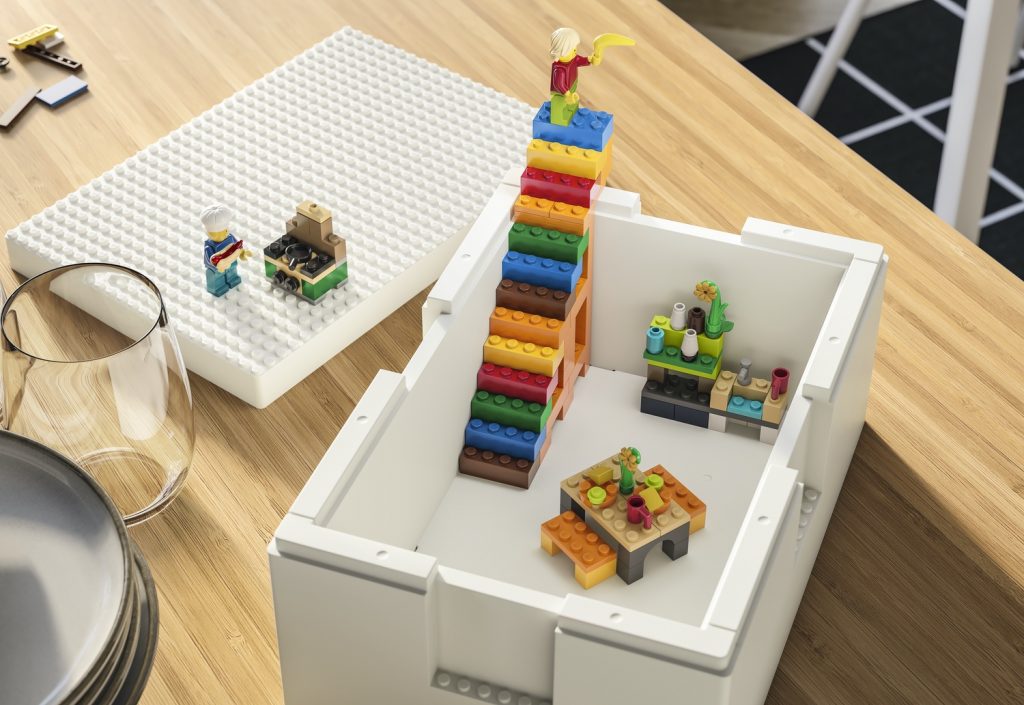 The product line name BYGGLEK was first revealed last year in June with design leads of both companies sharing their approach towards the core concepts and guiding principles with their thought process and goals. 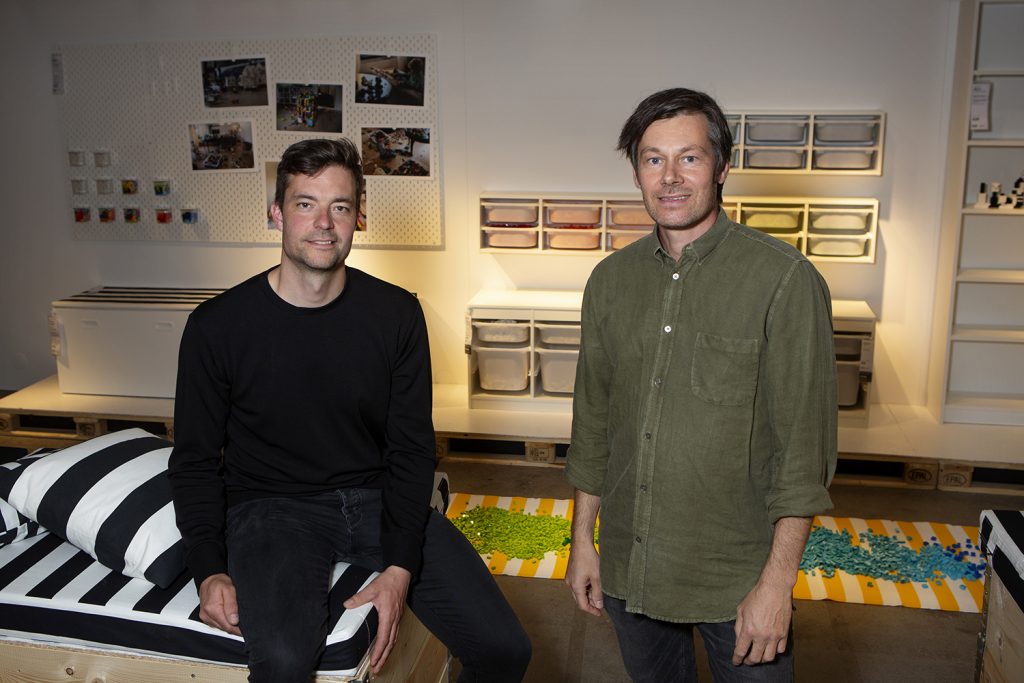 The designs attempt to explore and overcome the obstacles of how grown-ups and parents look at organising post-play experience and how children interact during creative play, according to Rasmus Buch Løgstrup, the designer at LEGO Group. Andreas Fredriksson, a designer at IKEA, shares that kids’ thoughts and ideas do not necessarily stop when the play with physical elements end, but they continue to build in their minds and imagination. The companies say the essence of being able to enable quicker play with LEGO with ease is essential in this digital world. By comparison, device screens have the benefit of starting and picking up quickly where a child last left off for seamless interaction. 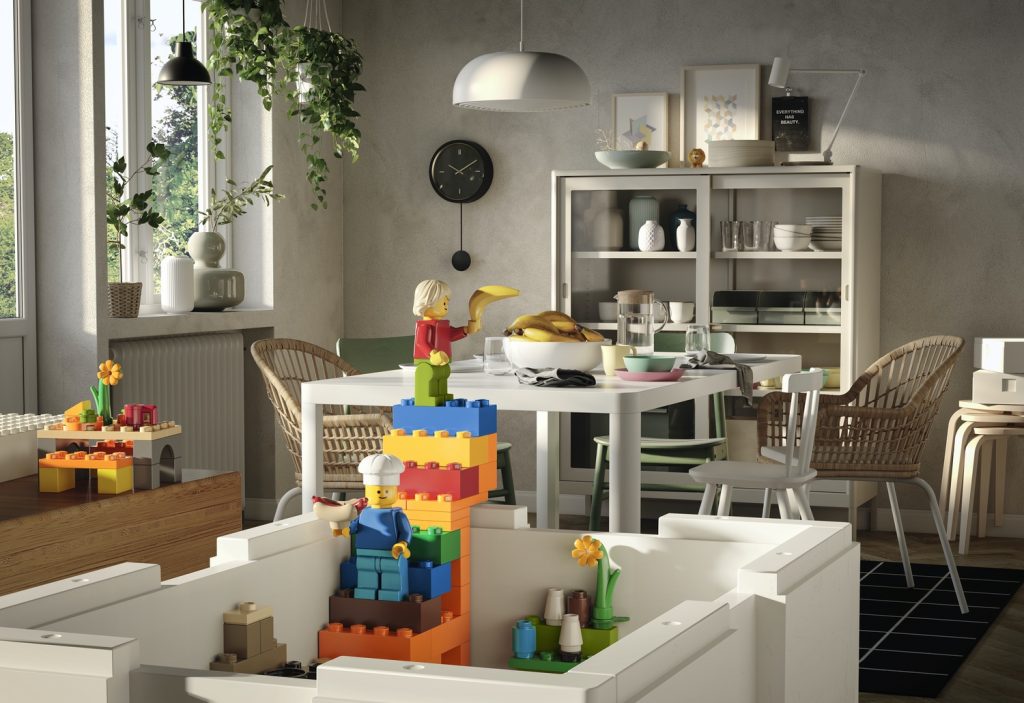 The launch lineup announced at press consists of 4 separate products featuring one set of 3 small boxes, two sets of larger boxes and a packaged set of LEGO bricks to add on to one’s collection or introduce the play system to those that may not have had the LEGO play experience. 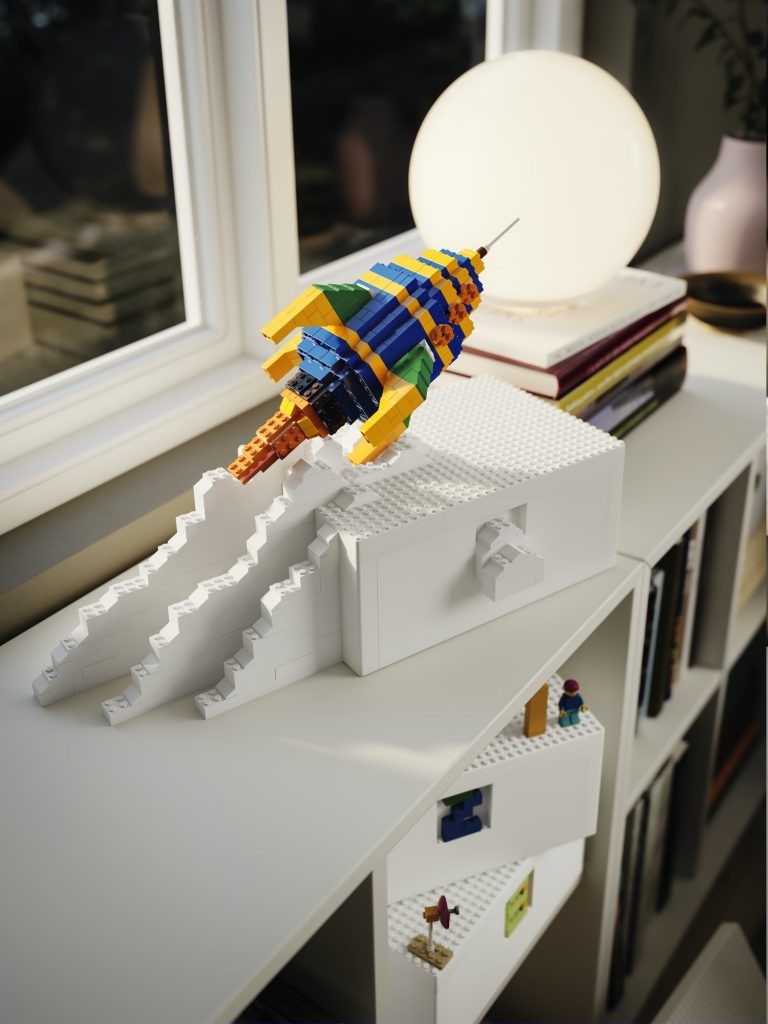 As with many of IKEA’s product names, the pronunciation of BYGGLEK seems to be less of importance as shown by this light-hearted video with a few kids attempting to voice their own interpretation.

In another video, Henry, a child at play with a colourful imagination, showcases his Dream House and how the BYGGLEK is incorporated with the custom creation.

The BYGGLEK systems will be available in IKEA retail channels in Europe, North America from October 1st. Availability for other countries will see a continued roll-out through the rest of this year. No pricing information is available at the time of publishing. 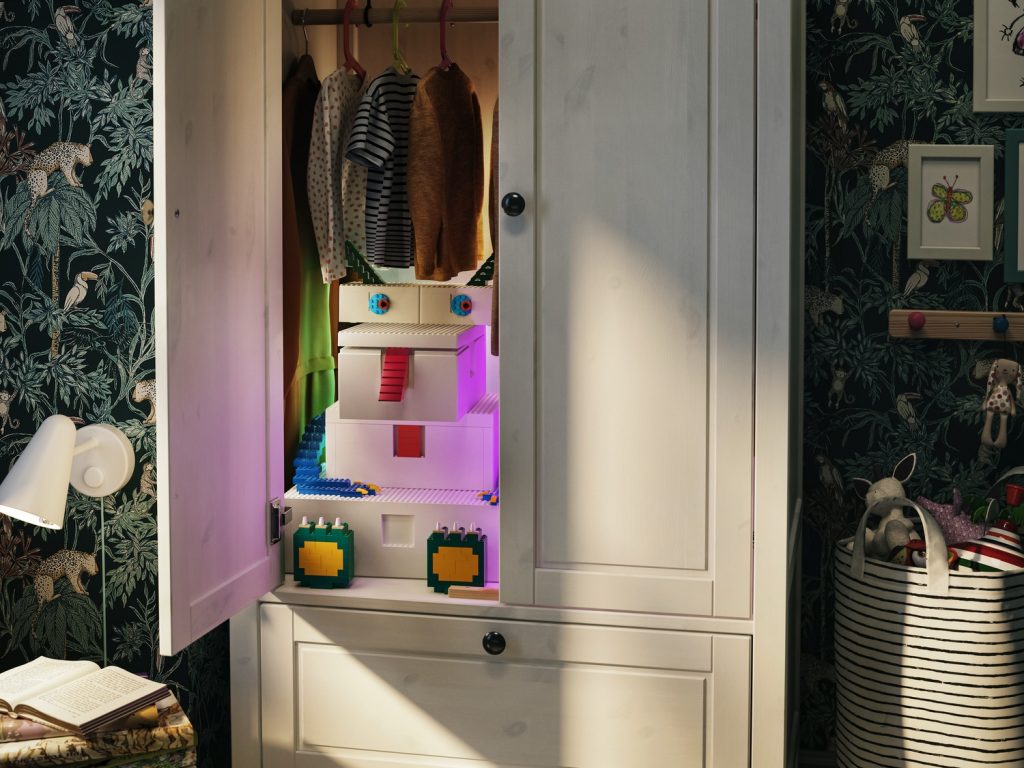 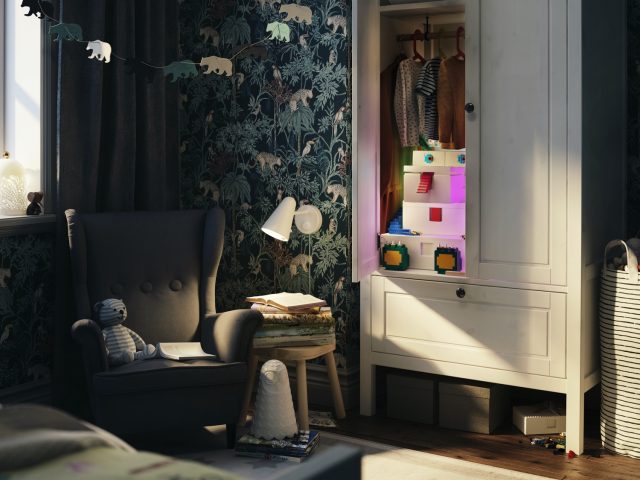 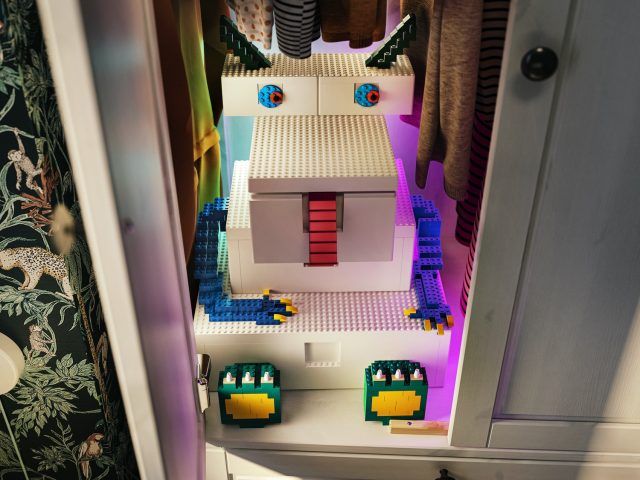 Play, display and replay: IKEA® and the LEGO Group introduce BYGGLEK – a creative solution that intertwines play and storage

August 27, 2020: Today, IKEA of Sweden AB and the LEGO Group reveal the long-awaited outcome of their collaboration. The two brands have joined forces to create a playful storage solution called BYGGLEK. Consisting of a series of storage boxes with LEGO® studs and a special LEGO brick set, the new BYGGLEK collection aims to encourage play and infuse more fun into storage around the home. The BYGGLEK collection will start to be available in existing IKEA retail channels throughout Europe (except Russia) and North America from October 1. The global roll-out will happen in 2020. (Check online for local availability).

With a strong belief that play makes both the home and the world a better place, IKEA of Sweden AB and the LEGO Group set out to remove barriers to play in daily life, whilst creating a practical yet playful experience that children and adults could enjoy together. Play is the most intuitive and powerful way for children to learn and grow. However, children and adults sometimes have different views when it comes to play and creativity at home. Where adults often have a need to create structure and organize, children see a stimulating and creative environment in which they naturally want to play, pause and then replay.* 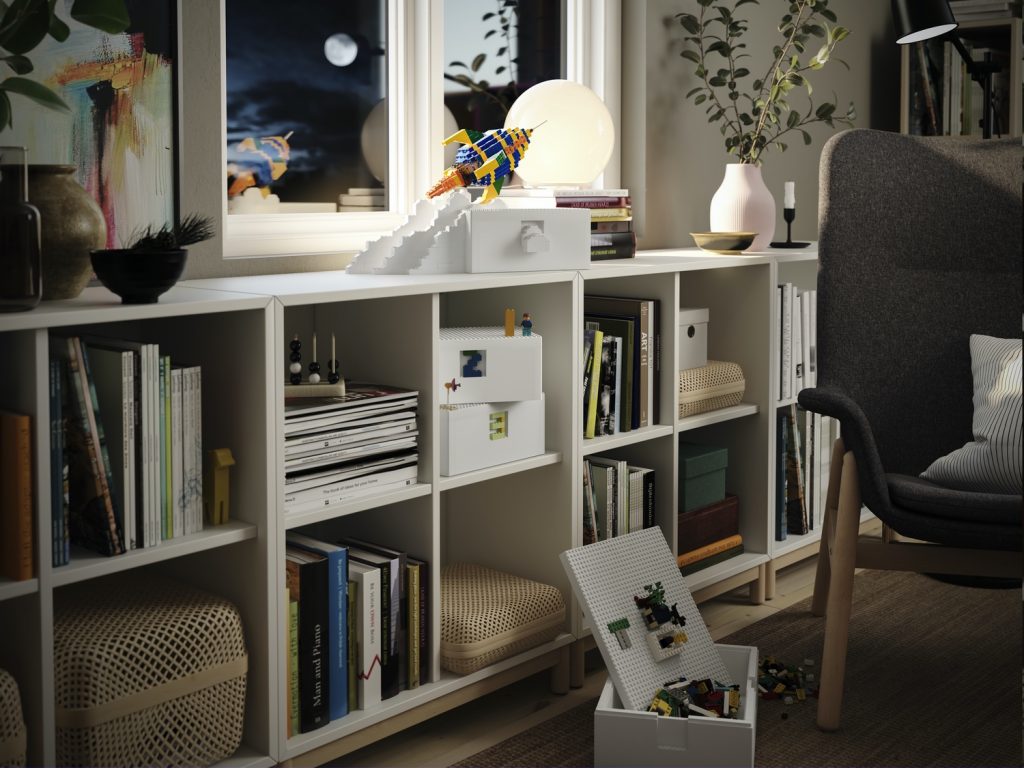 “At IKEA, we always believe in the power of play. Play lets us explore, experiment, dream and discover.” said Andreas Fredriksson, designer at IKEA of Sweden, “Where adults often see mess, children see a stimulating creative environment, and BYGGLEK will help bridge the gap between these two views to ensure more creative play in homes around the world. Plus, the BYGGLEK collection match perfectly with other IKEA products, making it possible to have your children’s creativity becoming a nice and unique piece of decoration at home.”

Speaking about the creative solution Rasmus Buch Løgstrup, designer at the LEGO Group said “BYGGLEK is more than boxes. It is storage and play intertwined. BYGGLEK provides families with a product range that helps create space for more play in their everyday – fuelling creativity, making it possible to have more fun together. It’s a possibility to play, display the cool creations and return to it to replay, remake, recreate or start over. BYGGLEK is all about endless possibilities, just like the LEGO System in Play.”

The BYGGLEK range consists of 4 different products – one set of 3 small boxes, and two sets of bigger boxes and one set of LEGO bricks to kick-start the playful experience. BYGGLEK can be used with any existing and future LEGO elements, as the studs used on the lid and front are part of the LEGO system in play. The LEGO System in play enables children to build and rebuild their own stories and through this process develop essential 21st century skills – with BYGGLEK we hope to extend the LEGO play experience in providing fun creative storage solutions that are just as playable as they are functional.

** In the IKEA Play Report, IKEA asked children what they want and 47% of them said that they want more playtime with their parents. At the same time 90% of the asked parents believe play is essential to wellbeing and happiness, building on to the belief that play is important. In the LEGO Play Well Study 2020, parents recognise the importance of letting kids play, well the way kids play. With 8 in 10 admitting messy play makes children feel free and helps develop their creativity (85%). Yet, 1 in 2 parents worry about their child making a mess when playing and feel a compulsion to tidy up around their kids even while their child is still playing (51%). 9 in 10 children confirm this reality, saying their parents tell them to tidy up while they are still playing (90%).