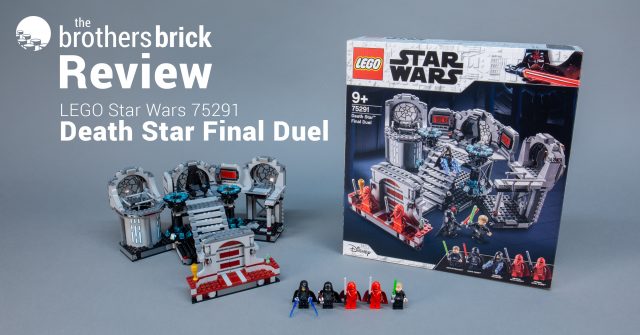 The parts for the set are divided among five sets of bags, and the instruction booklet is large enough to get its own sleeve, with the sticker sheet safely included with the booklet. Oddly, there’s a single large plate loose in the box, despite the bags containing plates that are only slightly smaller. It would be interesting to learn what the threshold is between bagged and loose-in-the-box plates… 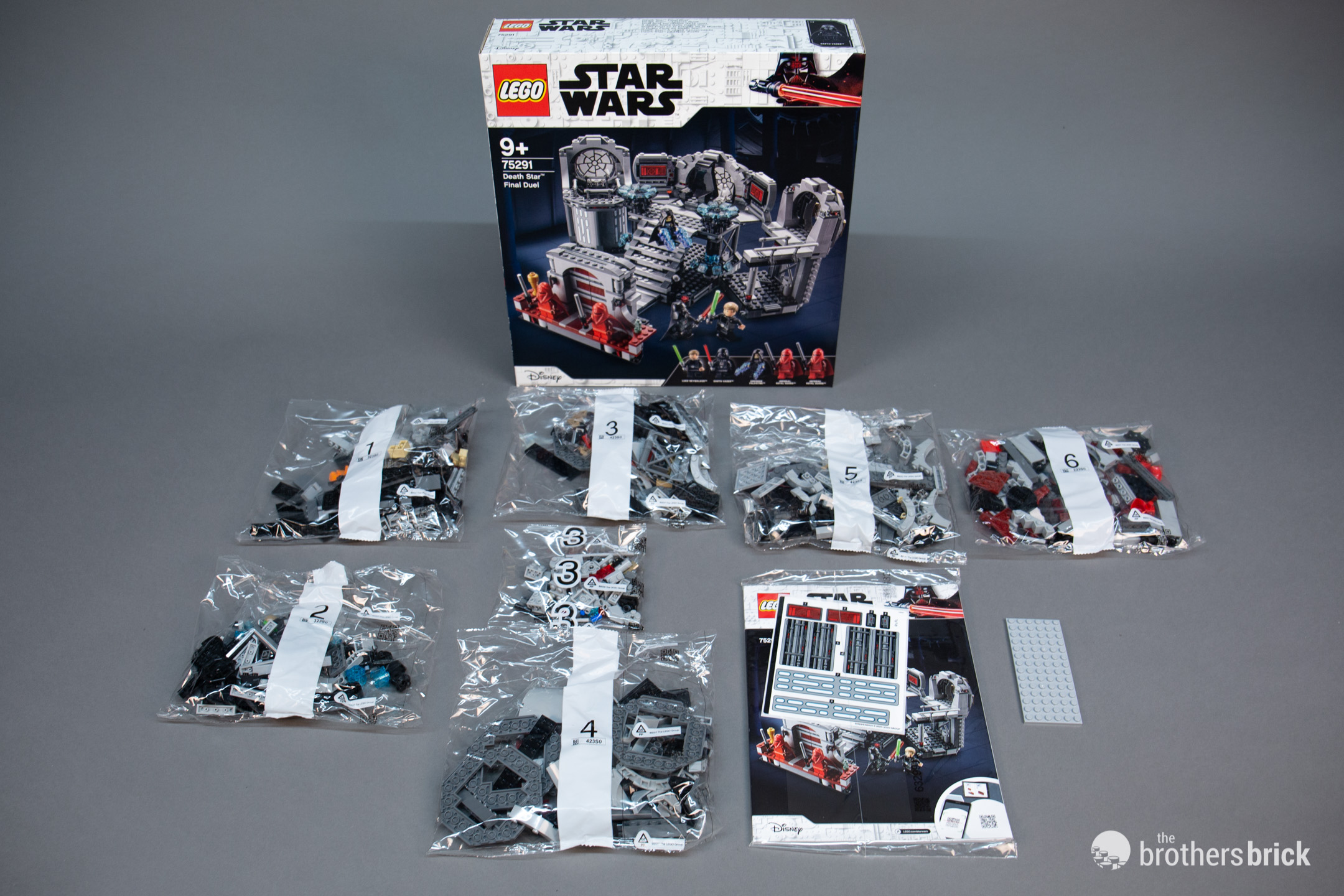 The box features Darth Vader in minifigure form, swinging his lightsaber. Although he’s kind of cute, it’s a bit odd to see a difference in aesthetic within the same wave of LEGO Star Wars sets — the boxes of 75283 Armored Assault Tank and 75280 501st Legion Clone Troopers both featured a more realistic “Ahsoka Trooper” helmet.

I’ve thought for years now that LEGO should build the lit walls of the Death Star using bricks rather than applying stickers, but this is not the set in which we get to see how the LEGO Star Wars design team would solve this challenge (which would admittedly be considerably more parts-intensive) 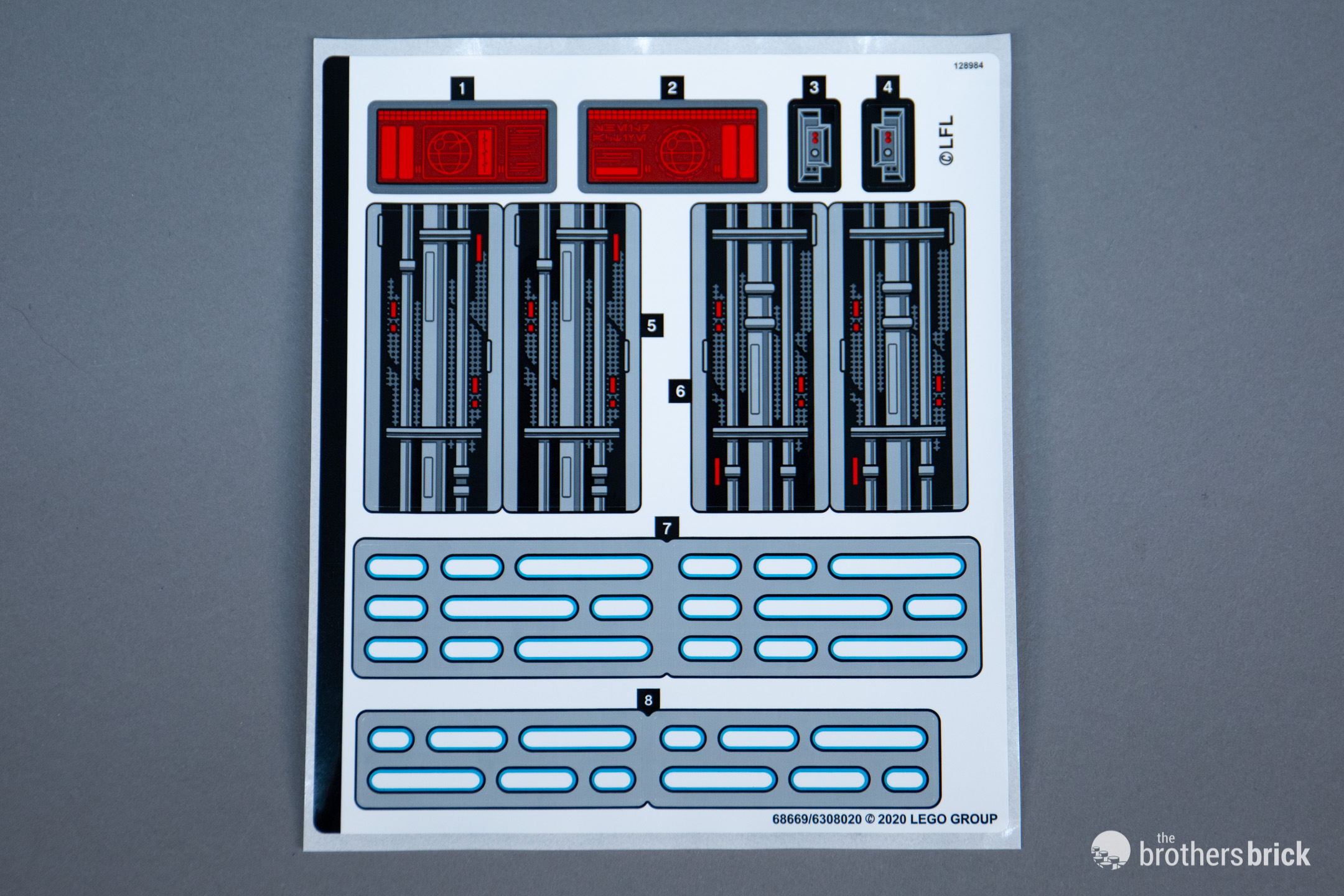 Clever building techniques aren’t common in location-based sets, except in cases when there’s some important architectural detail that needs to be recreated in LEGO. The barren, industrial aesthetic on the Death Star doesn’t lend itself to interesting architectural details, so any clever building techniques in this set are reserved for the play features, which we’ll cover in detail later in this review.

The most interesting non-functional parts of the build surround the Emperor’s throne, with red screens framed in black on the walls and duty stations with trans-blue consoles on either side. 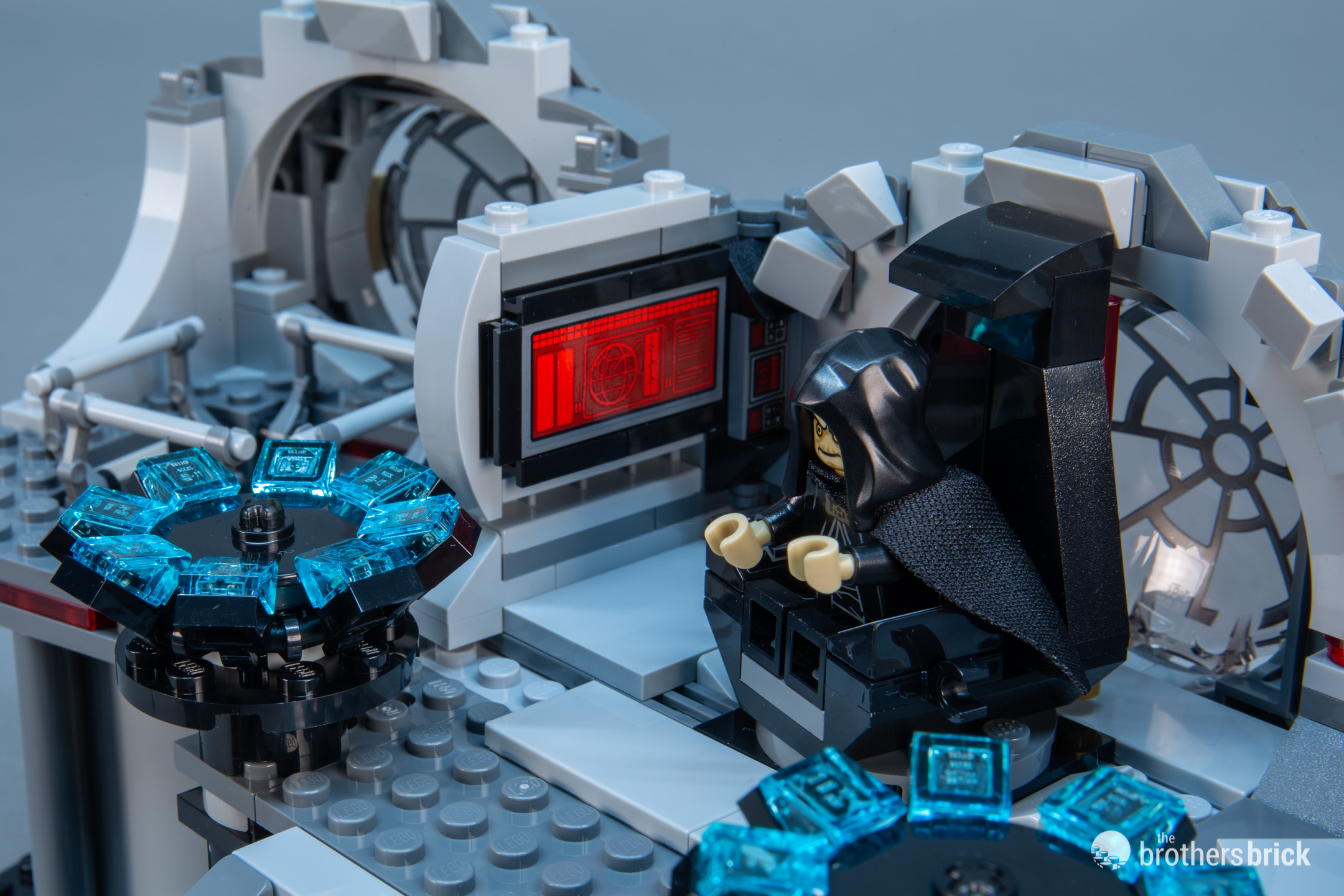 Despite the overall lack of truly innovative techniques, the less-interesting portions of the build go quickly and seeing the play features come together is quite fun.

Once it’s complete, Emperor Palpatine’s throne room looks fantastic, with angled sections to either side, an imposing staircase to the upper level, and a doorway leading into the throne room. 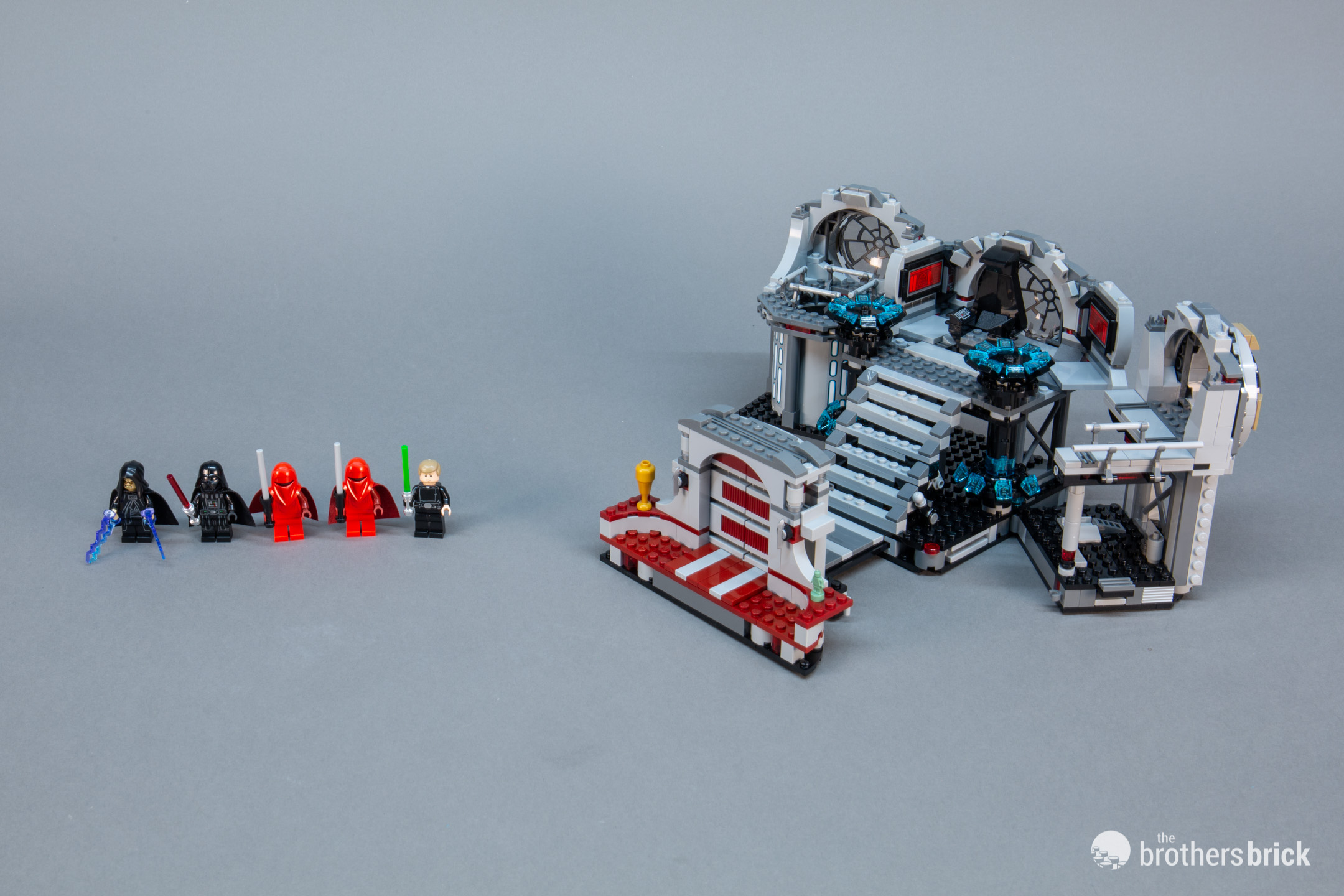 The doors are fairly standard studs-up affairs in a brick-wide slot, but they incorporate some color variation in both the doors themselves and in the floor section on which the doorway is built. This section of the build does not actually appear in Return of the Jedi (unless I’ve missed it after seeing the movie dozens of times), but is illustrated in DK’s 2016 Star Wars: Complete Locations, indicating that a receiving area lies on this side of the doors. 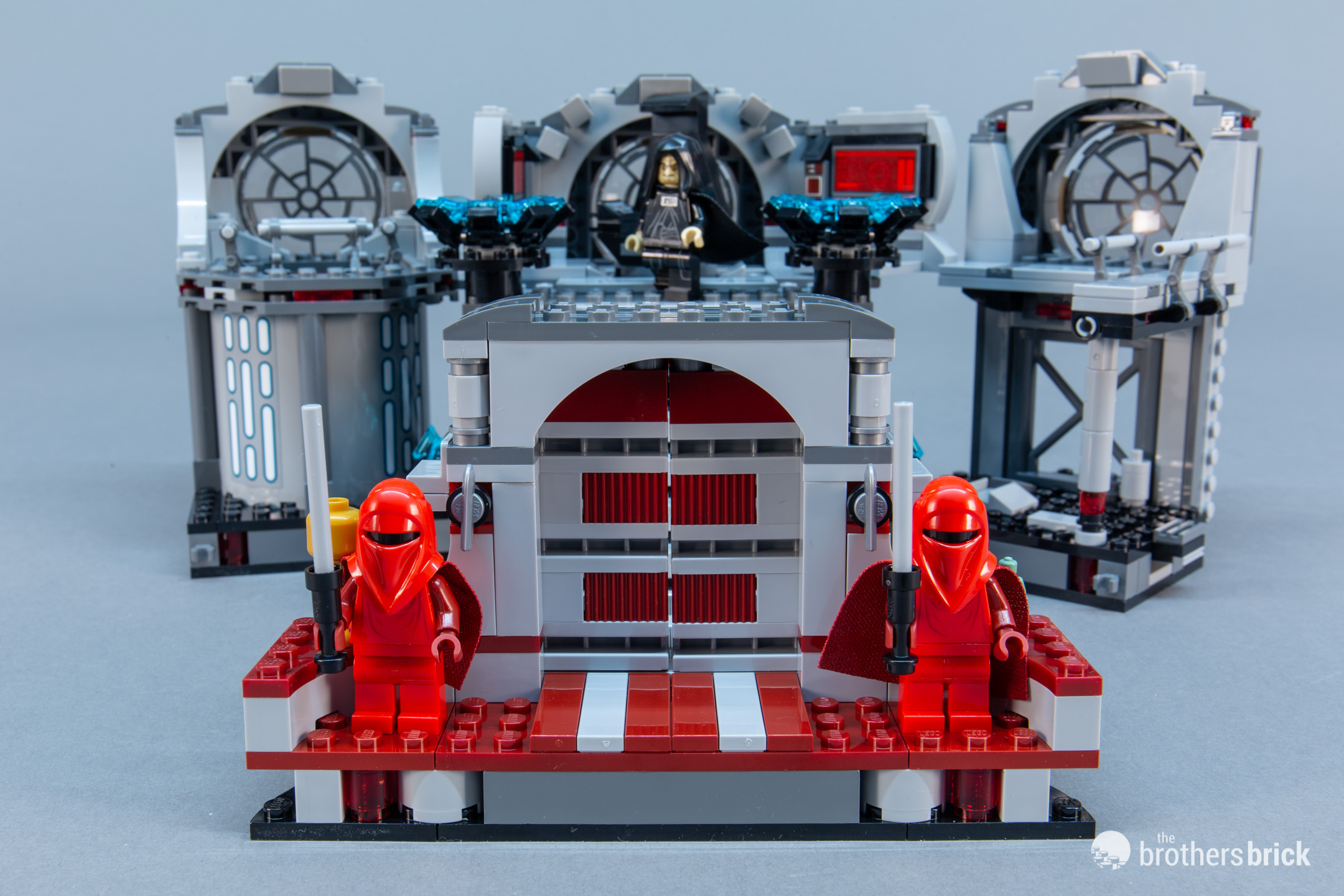 The LEGO Star Wars design team has even included trophies and statues shown in the cross-sections book. The doors slide open smoothly in their slots, and the receiving area provides enough room for the Imperial Guards to stand at attention on either side. 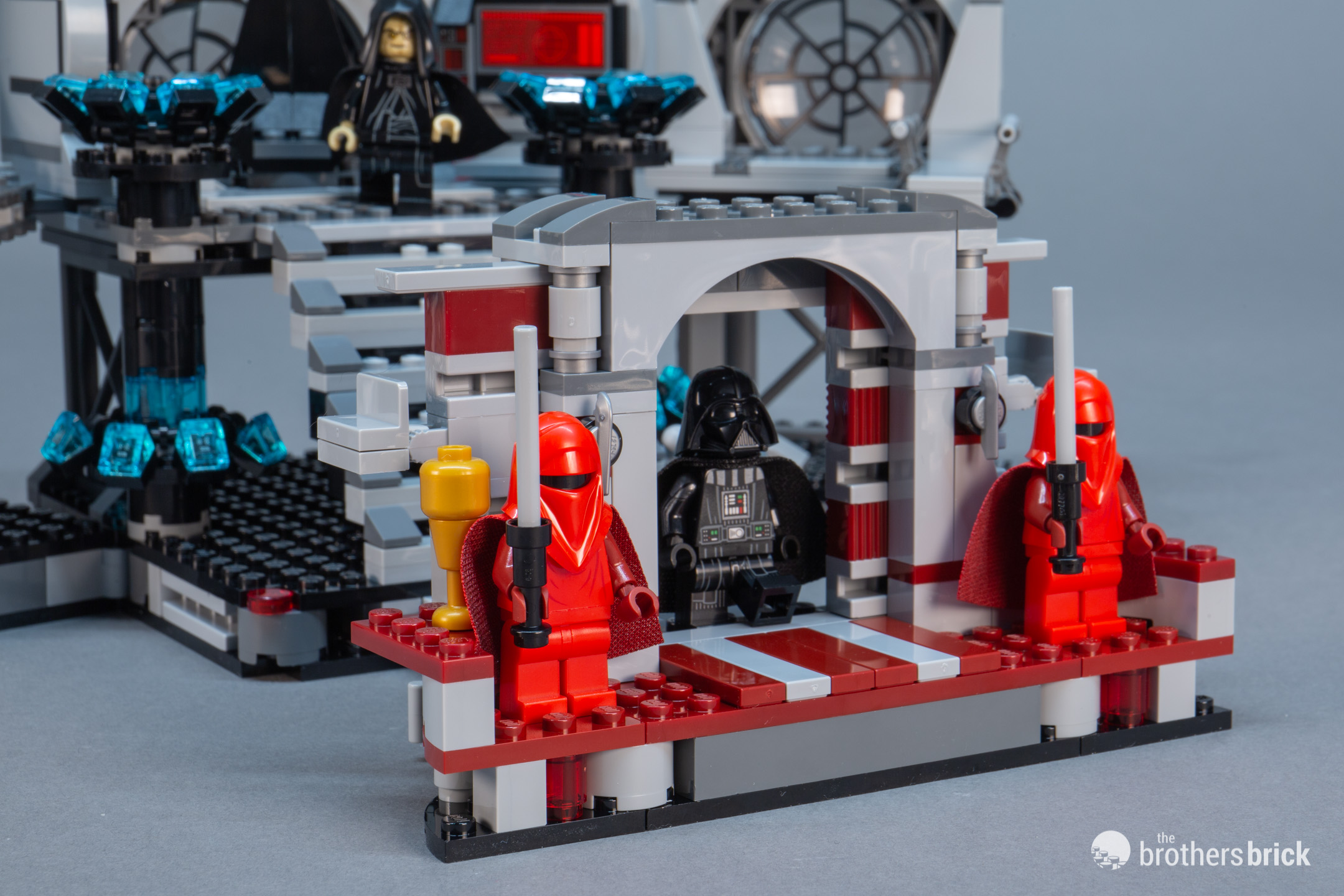 A short floor connects the door area to the stairs up to the throne level. We’ll return to this floor area in a moment. 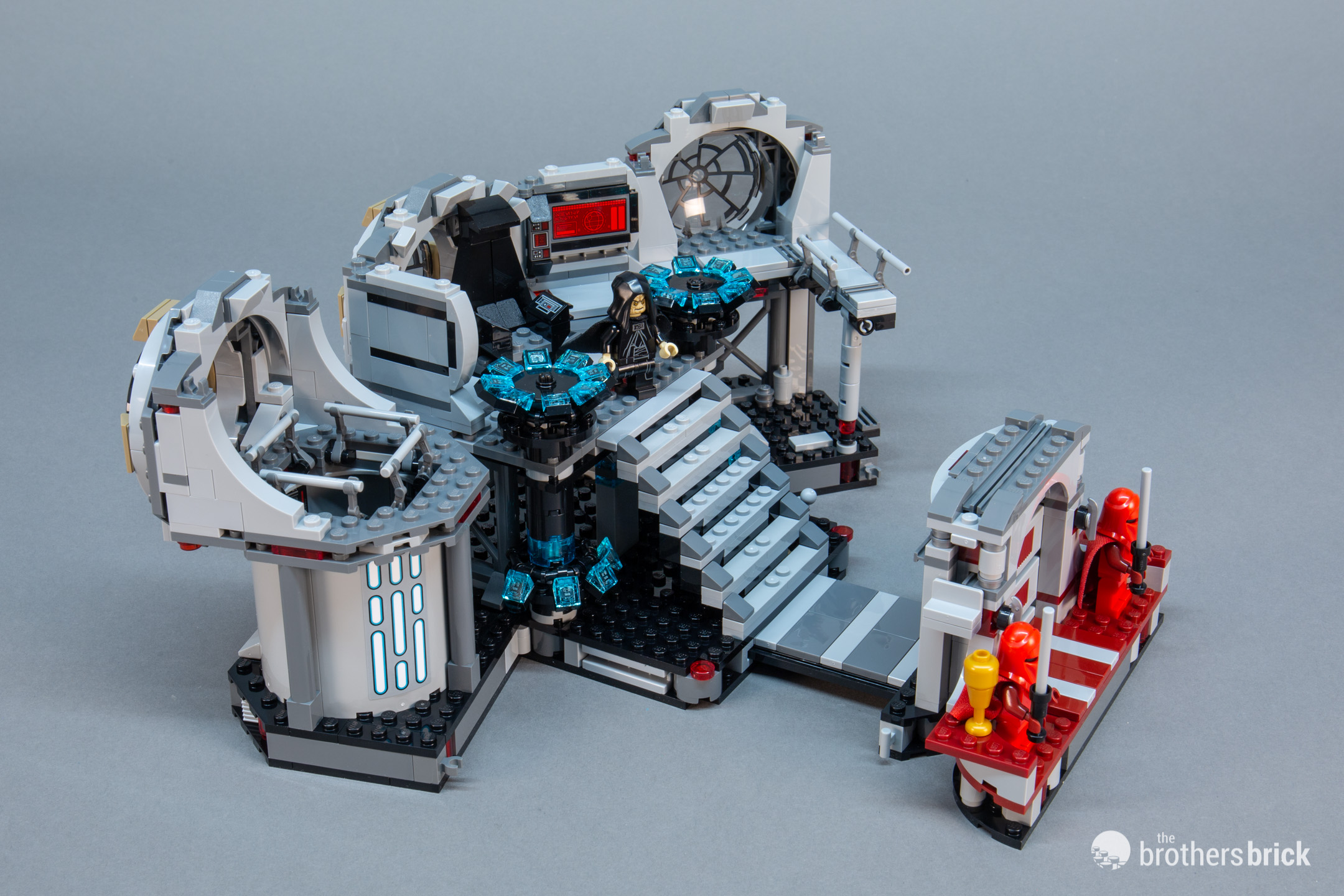 The stairs up to the throne have steps that can be popped out via a lever in order to throw Darth Vader off. 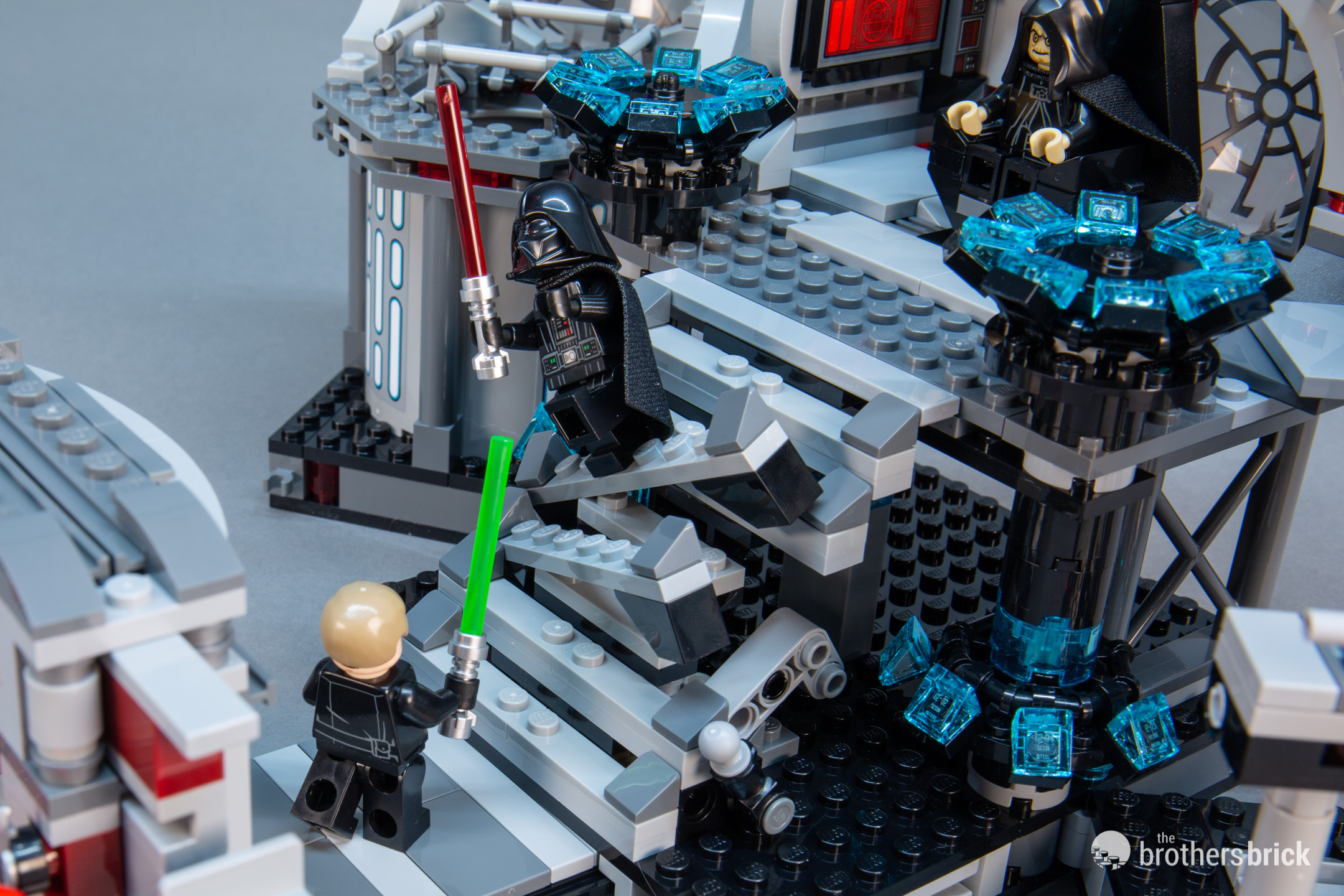 After being thrown around by his dad and pursued with a laser sword, Luke can then play a fun game of hide-and-seek in the shadowy area below. 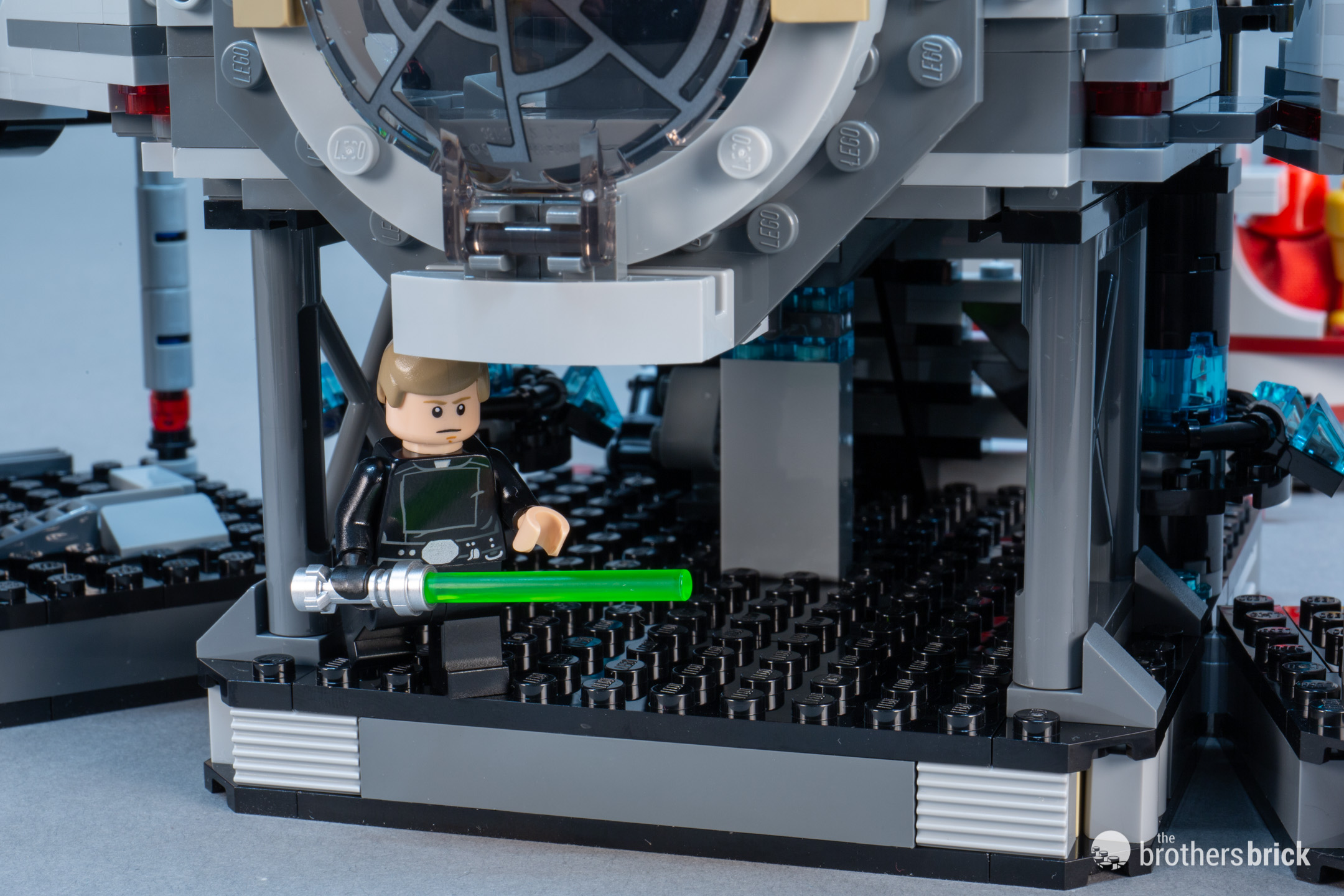 In the lower area on the right side of Palpatine’s throne, a catapult can launch minifigs toward the upper walkway (though good luck sticking the landing). The support post for the upper walkway sits in an inverted 1×1 round plate with a hole attached to an inkwell/nipple piece, resulting in a rather precarious perch above. 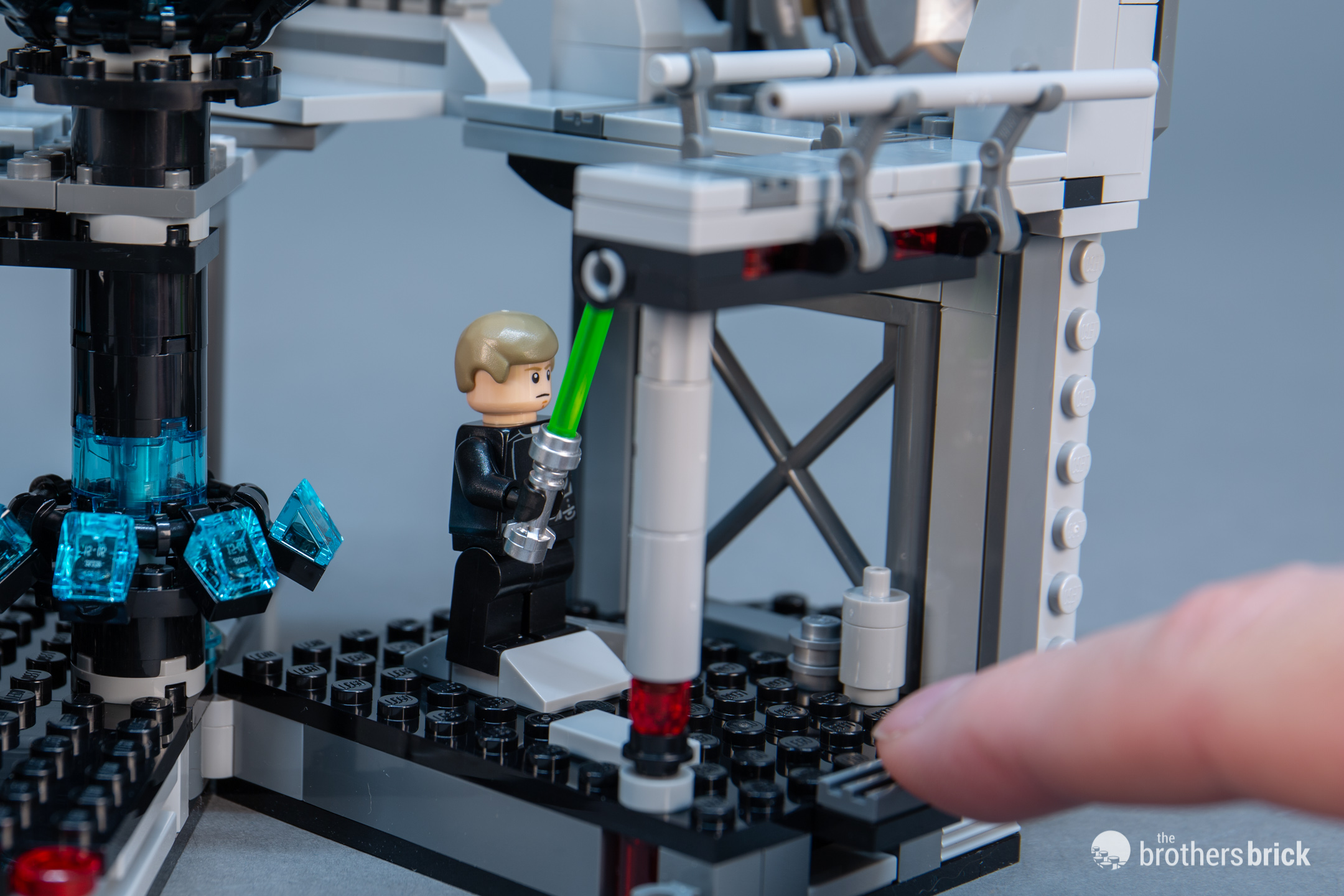 Knocking the support from the upper walkway folds it under, collapsing the walkway. The pillar is loose enough that hitting it with Darth Vader’s lightsaber is enough to knock Luke down from above. Surprisingly simple, it’s a very fun play feature that comes as a bit of a surprise when you’re building the inverted base for the pillar and the sub-assembly for the walkway later. 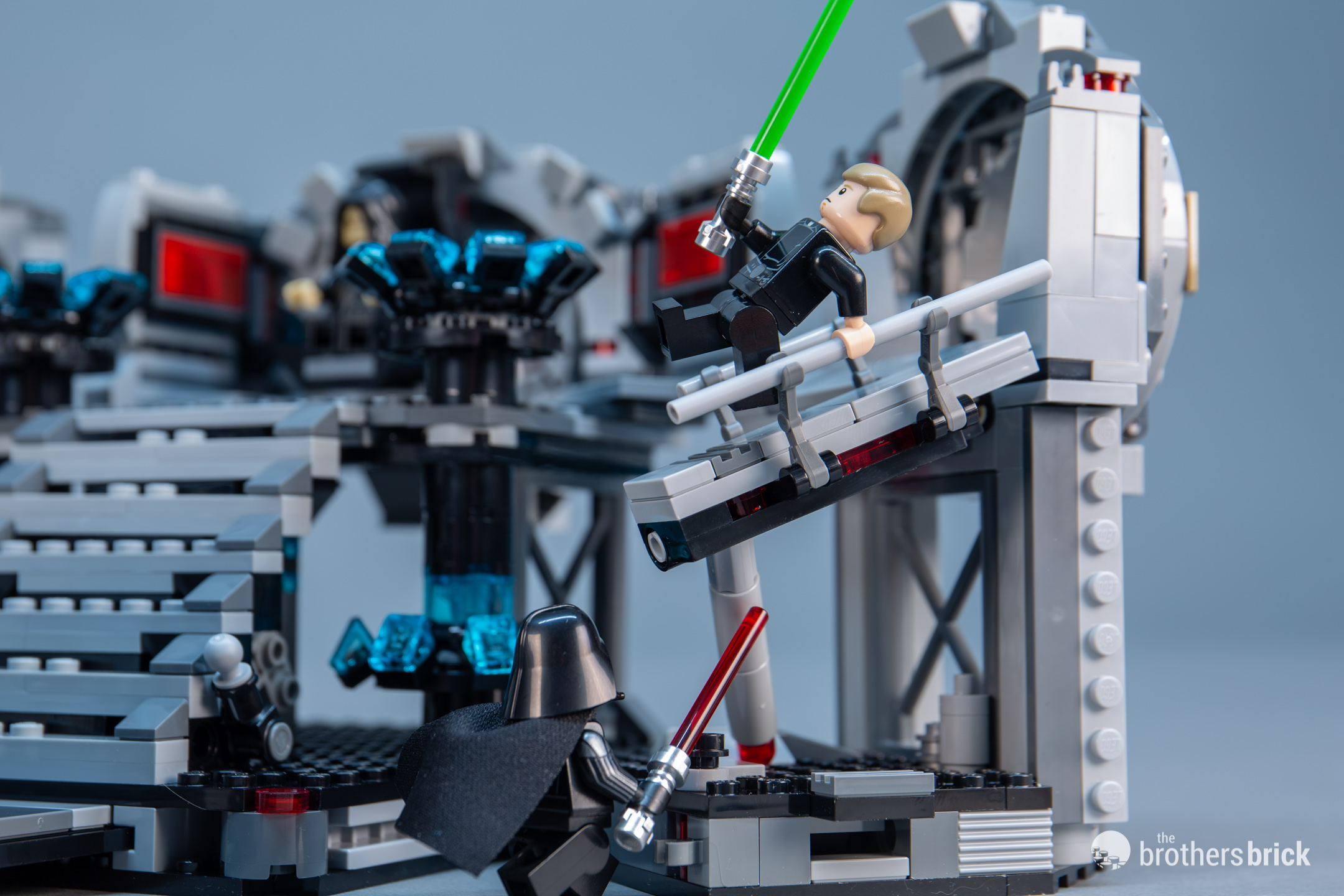 There isn’t much that’s functional on the left side of the set, which mainly consists of a shaft that you can throw Emperor Palpatine down when you’ve finished playing with him. 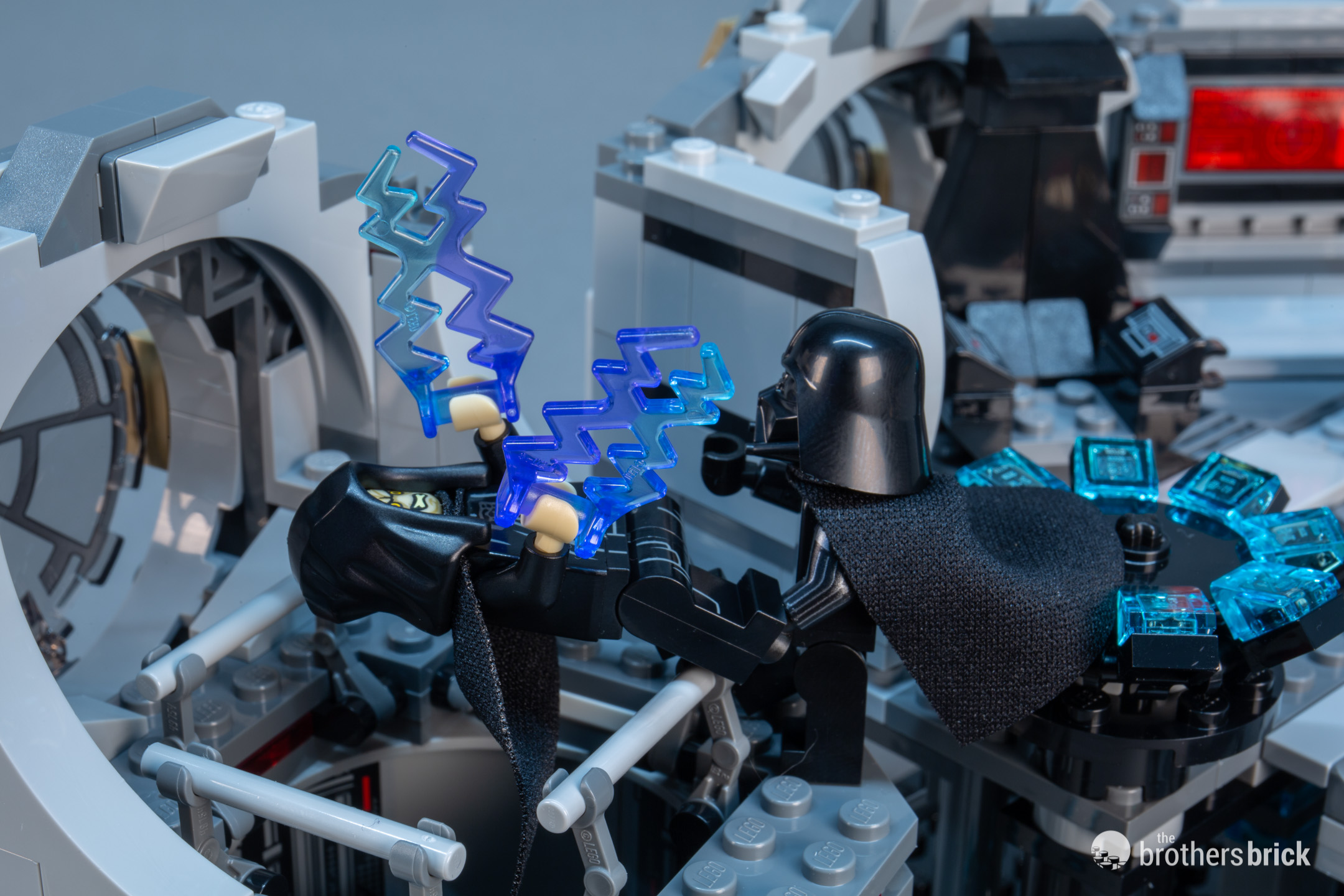 Silly hide-and-seek jokes aside, this is an incredibly photogenic set, proving just how much fun younger kids will have with it while adult collectors can display it on a desk or shelf with the minifigs acting out various parts of the final duel. 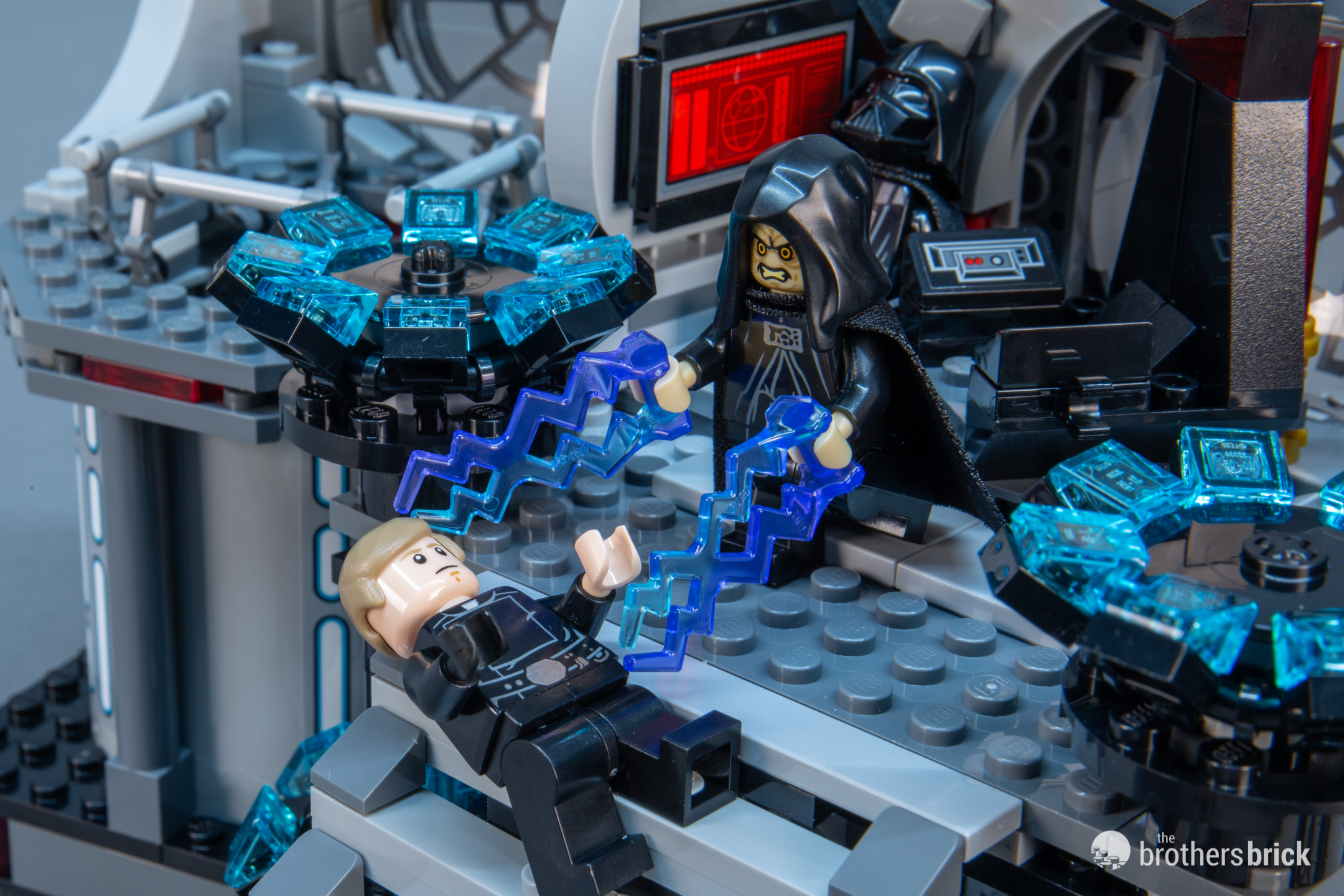 Finally, when you’re ready to put the set away, it folds up into a much more compact footprint. The two angled sides fold in, while the floor in front of the stairs slides into the base under the throne area.

There aren’t too many options for minifigure selection in a set based on a movie scene with a limited cast of characters, so the minifigure selection in this latest version of Death Star Final Duel aren’t surprising, nor are they different from the 2015 version — Luke Skywalker, Darth Vader, Emperor Palpatine, and two Royal Guards. 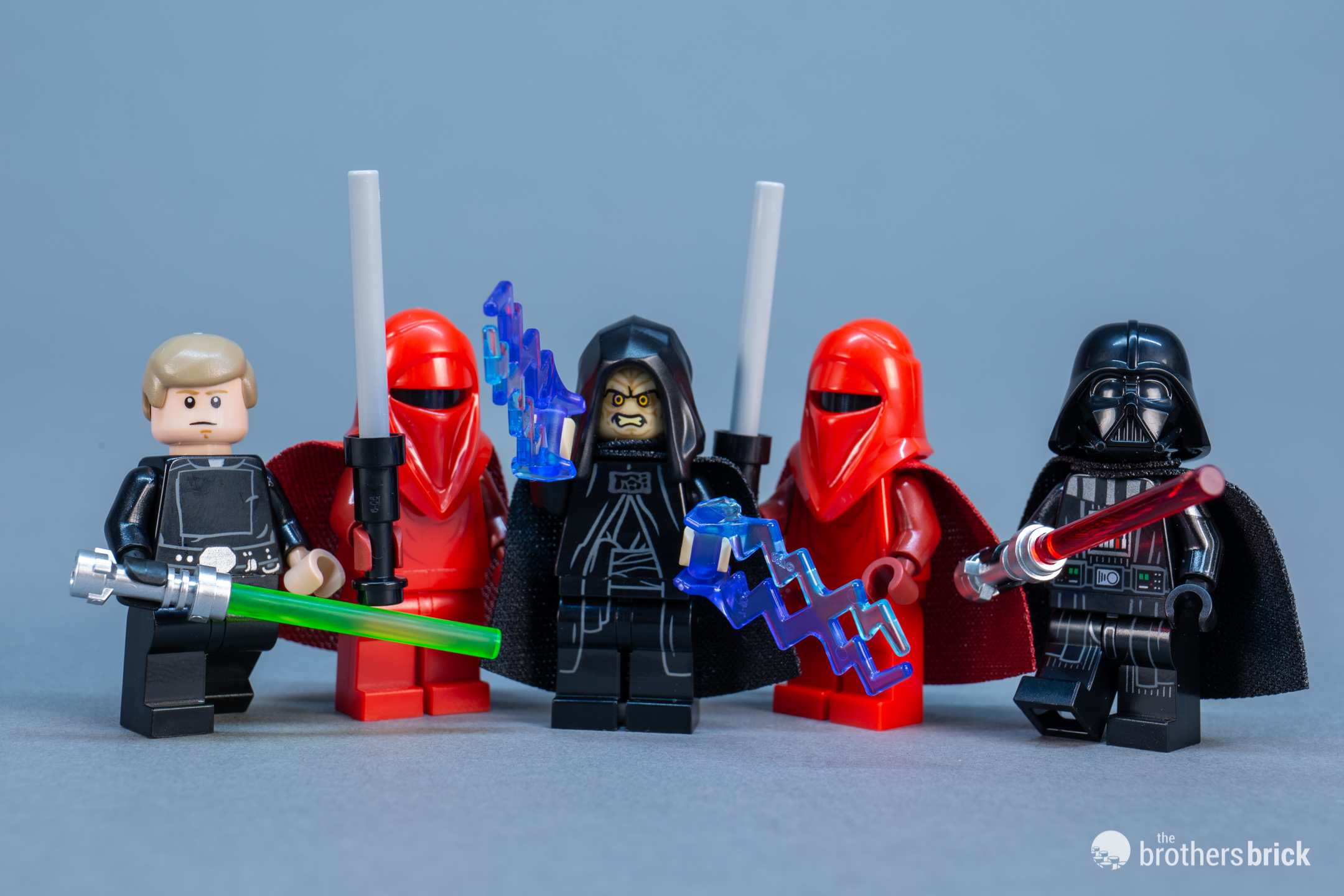 The newly minted Jedi and his abusive father are nearly identical between 2015 and 2020. Luke is completely identical, but the Dark Lord of the Sith does get new printed arms, which were not even included in the $350 Cloud City set. The subtle silver printing looks gorgeous and makes this the most detailed Vader fig released to date. 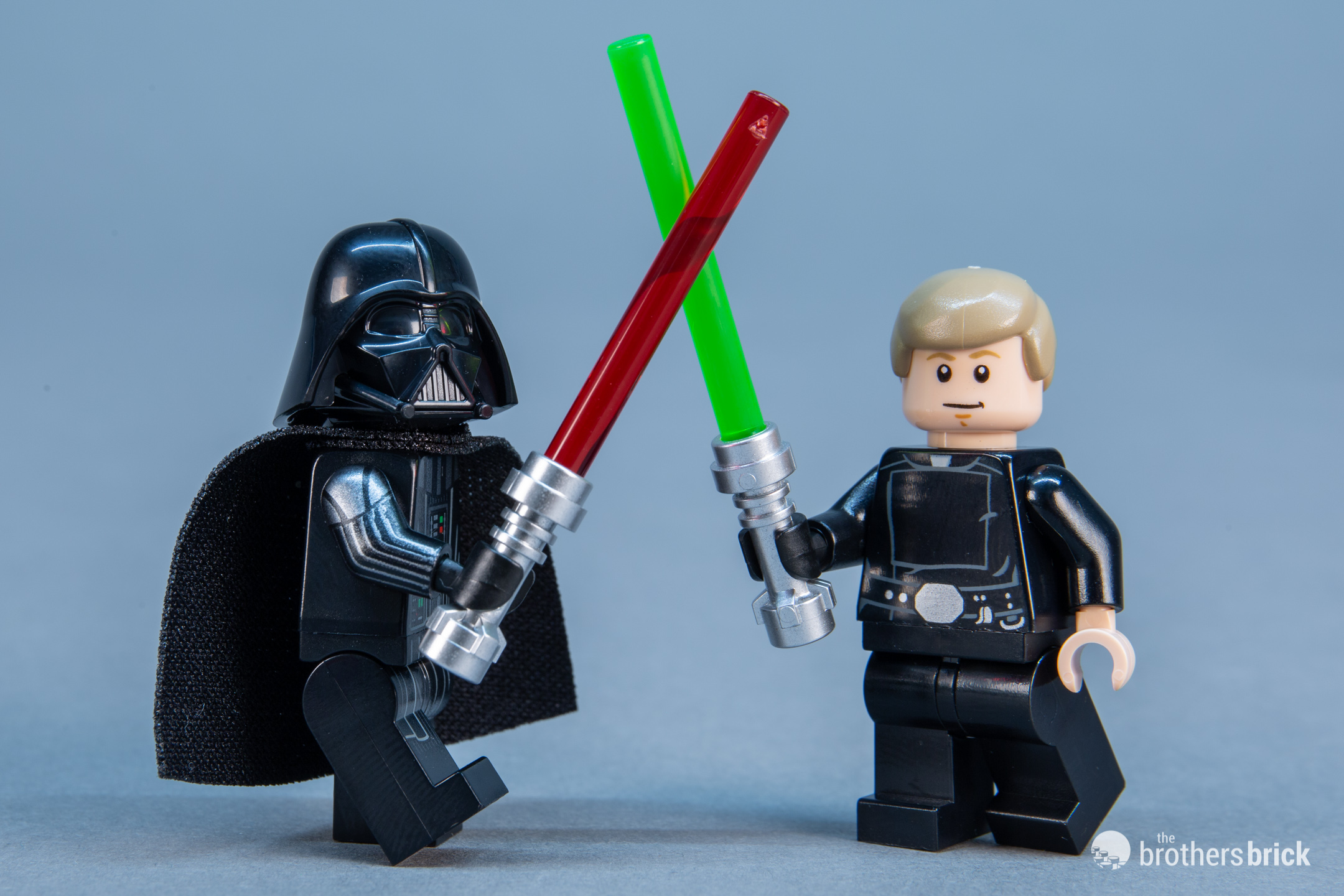 Emperor Palpatine’s elite, silent Royal Guards are also subtly different from the 2015 version, with soft-cloth capes that are dark red on the inside and lighter red on the outside. Still, these are relatively common minifigs, most recently appearing in 75251 Darth Vader’s Castle released last year. 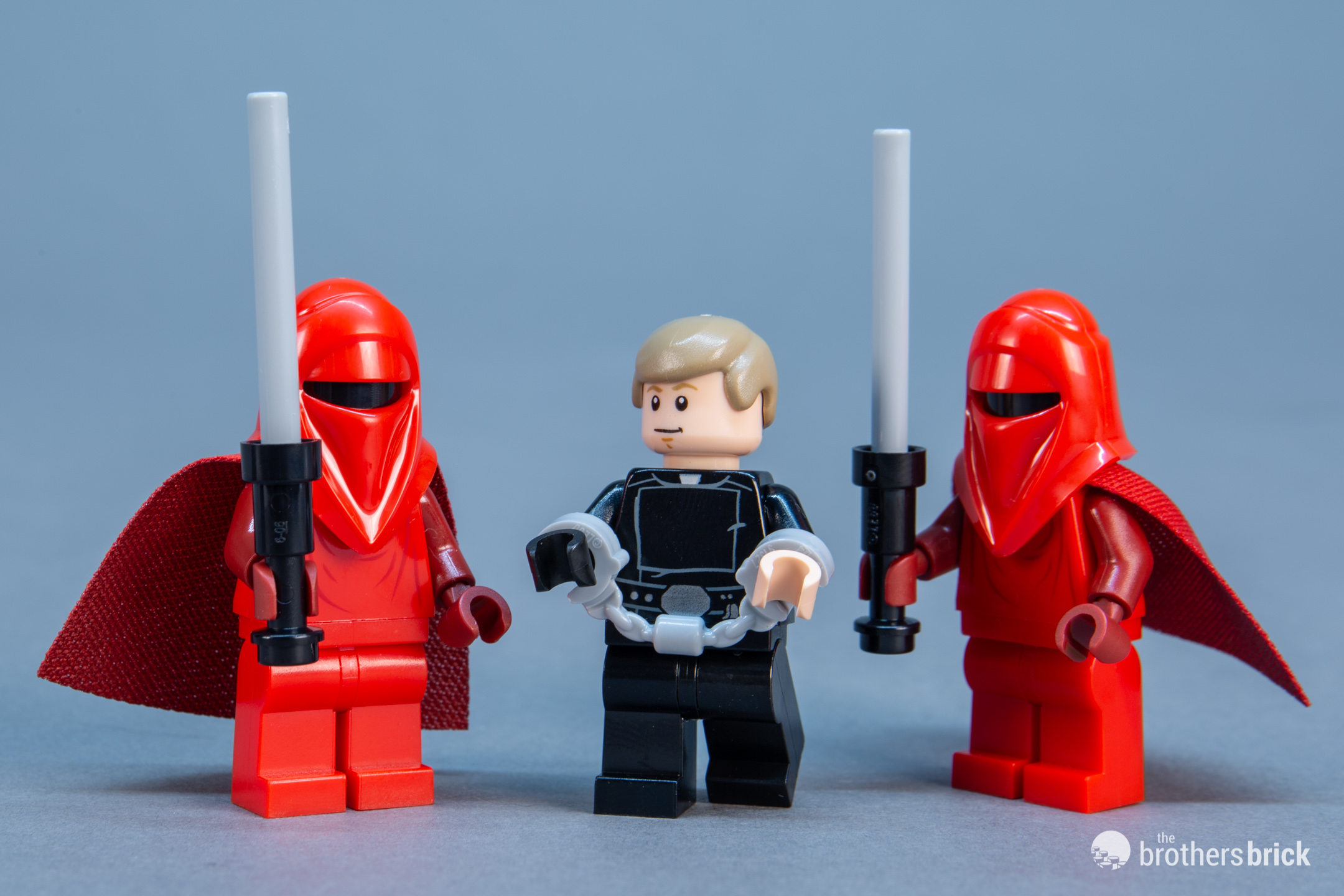 However, the only wholly new minifigure design is Emperor Palpatine himself, sporting a new style of hood in place of the hood he’s worn since 2000. The hood piece itself is not brand new, having first appeared last year on the Knight of Ren Ap’lek (the old hood piece goes back to the Classic Castle era of the 1980s). True to his hidden identity as Darth Sidious, Palpatine carries a red-bladed lightsaber with a gold handle. 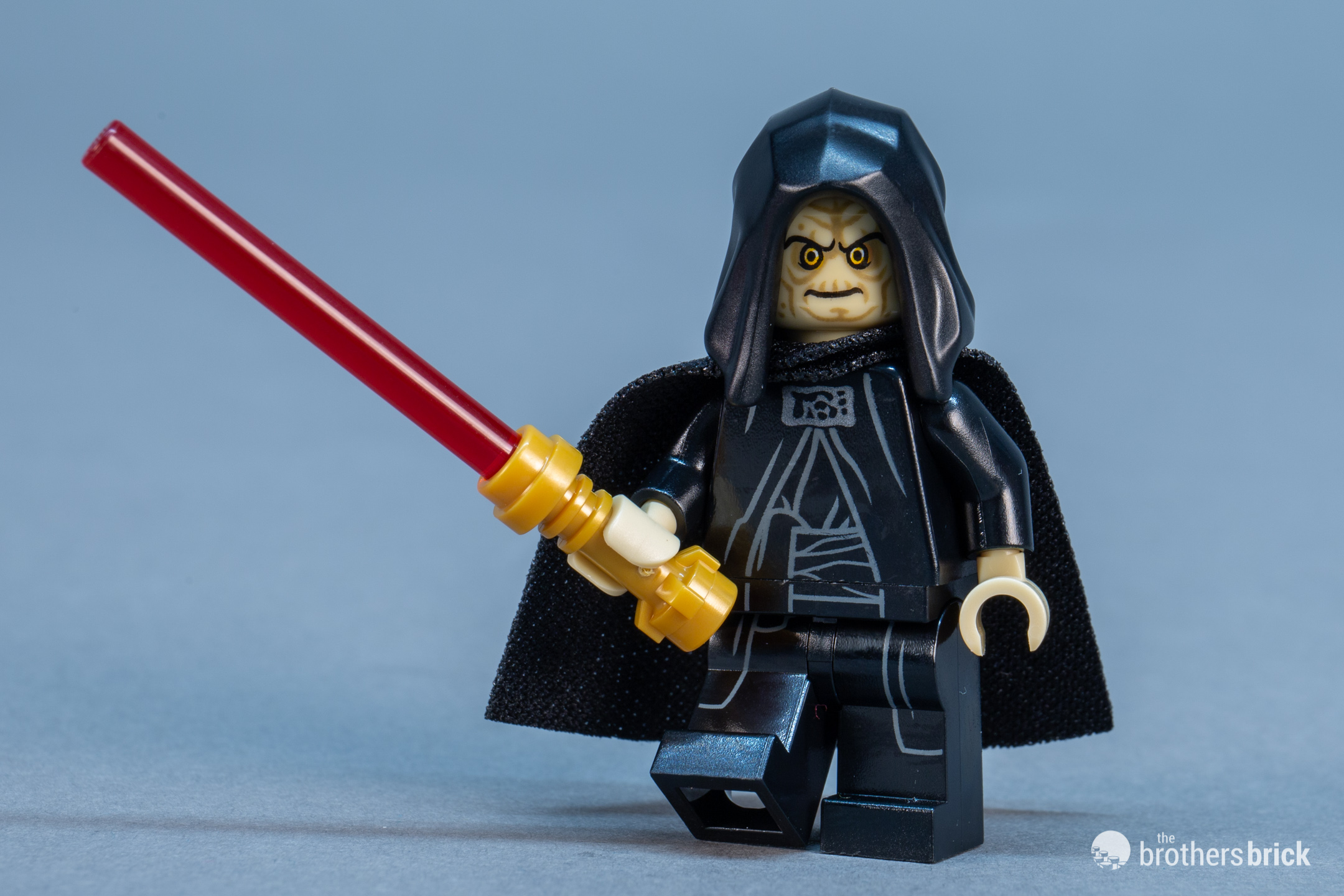 Old Man Palp’s head is dual-sided so he can cackle in pleasure as he zaps poor Luke and his ailing dad using the trans-blue lightning accessories included in the set. 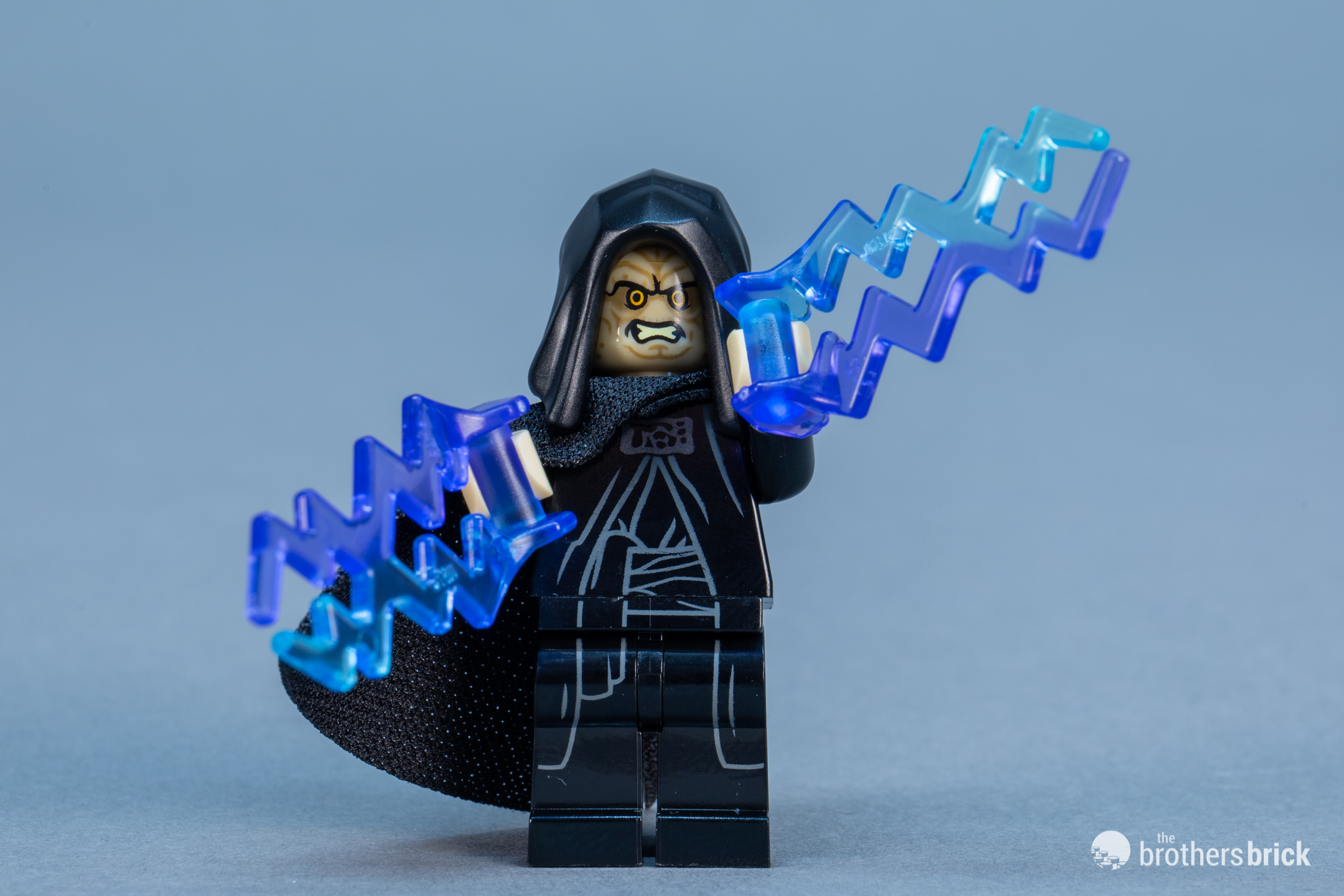 75291 Death Star Final Duel is the first playset I’ve truly enjoyed building in a very long time. I bought the $500 75159 Death Star playset for myself and gave up out of boredom after about a third of the build, going through the remainder of the bags merely to pillage the minifigs for my collection. Similarly, I provided our readers with a very mixed review of pros and cons about the $350 Cloud City. Needless to say, I’ve been disappointed by playset-style LEGO Star Wars products before. 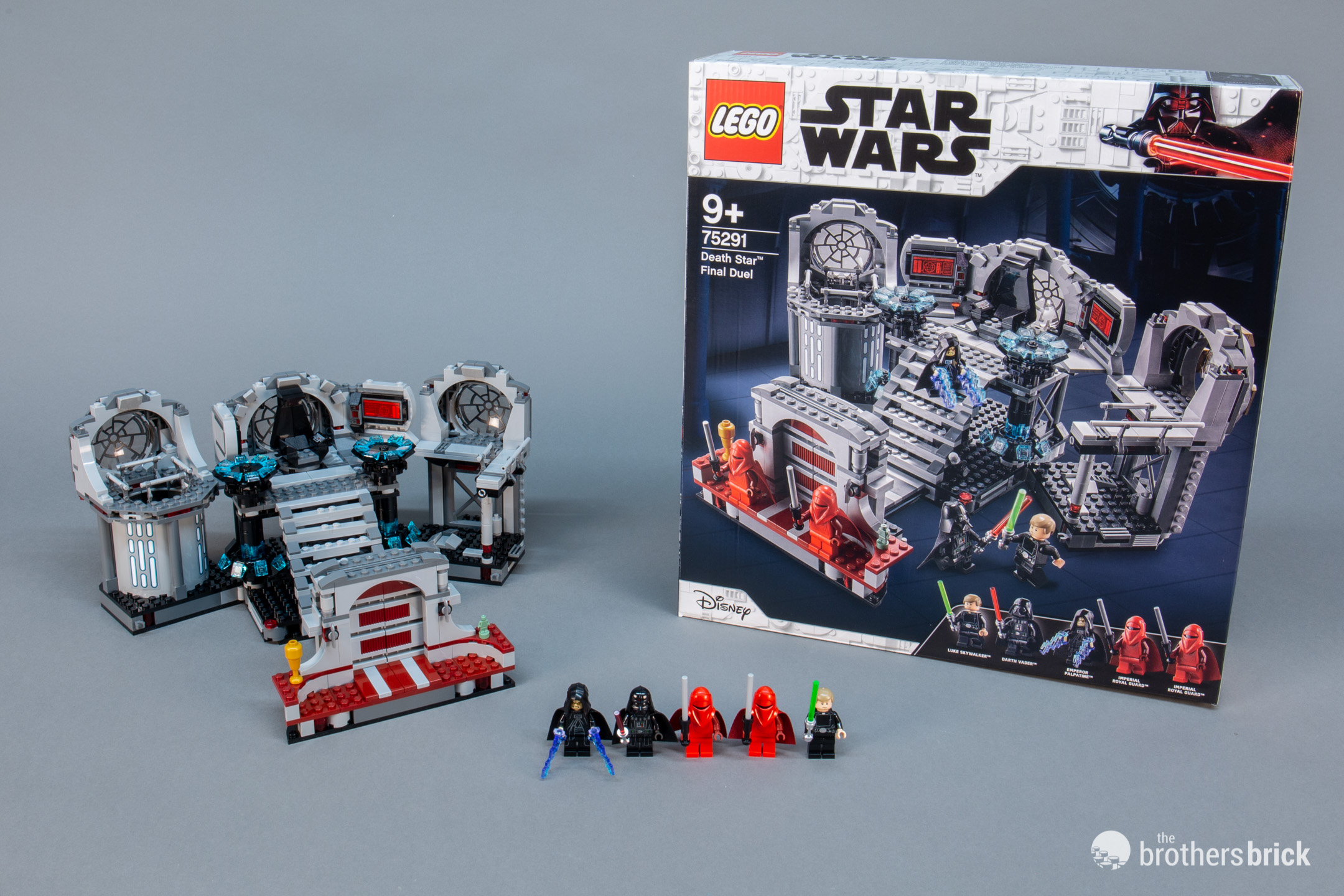 There are certainly many similarities with the 2020 Final Duel shares with the 2015 version, including the fold-up mechanism and pop-out stair steps. But this version just looks better overall, from the more-detailed receiving area to the throne room, and new play features like the collapsible walkway. Others have pointed out that the other main difference is that the Emperor’s death shaft has been moved from the right side to the left, but this doesn’t seem like a particularly meaningful design change compared to the other improvements. 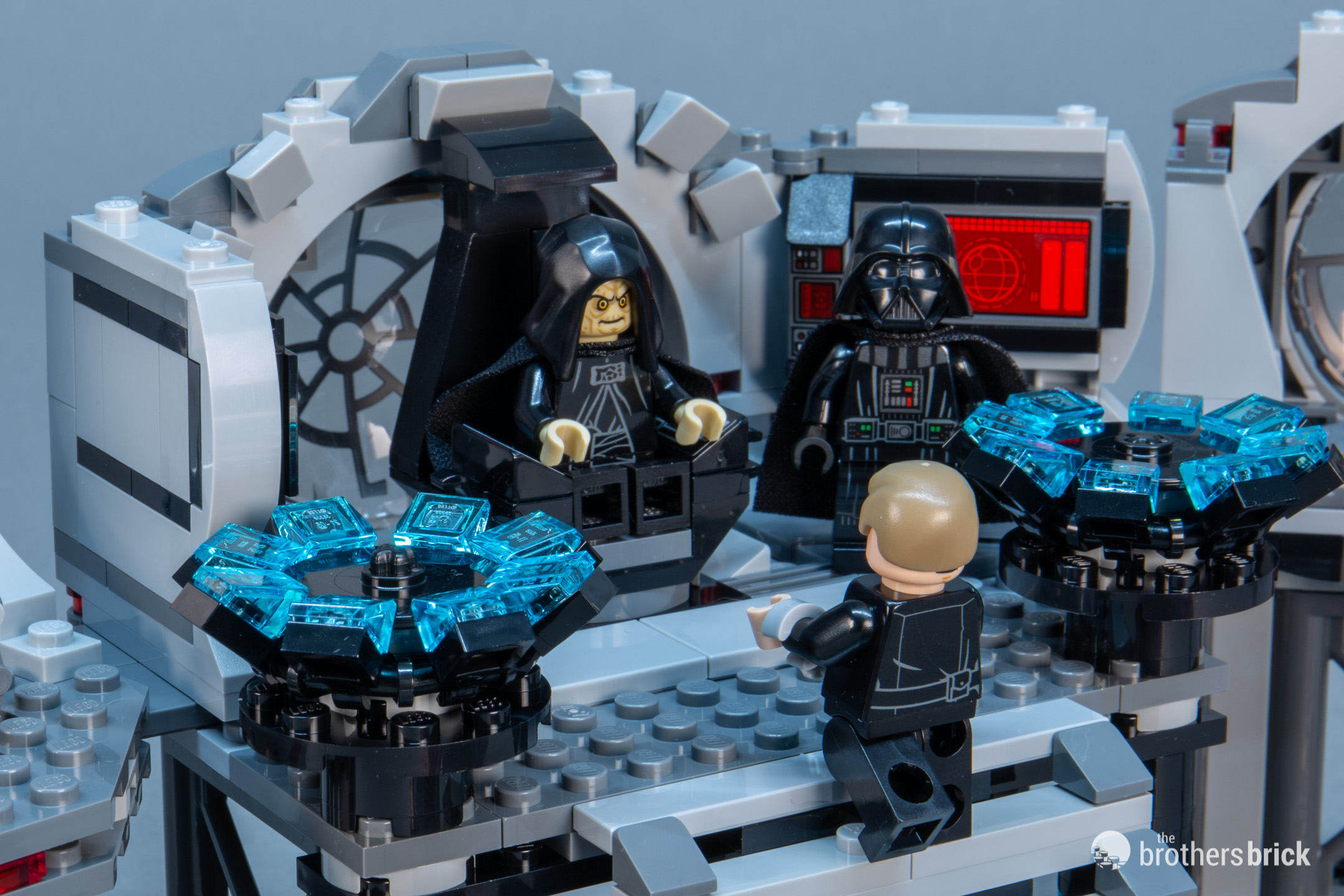 The “licensed set premium” is fairly high on this set, with only 775 pieces and two truly outstanding minifigs for a $100 price point. Nevertheless, I’m genuinely impressed with the finished model and its fun play features. The enhanced Darth Vader with new arm printing plus a fully redesigned Emperor Palpatine give LEGO Star Wars minifigure collectors a great reason to pick up this set as well.