We’ve been so focused on LEGO Star Wars sets from The Force Awakens that you’d think we’d forgotten there was an Original Trilogy thirty-odd years ago (I deny the existence of any Prequel Trilogy). For their January 2016 assortment, LEGO hasn’t neglected Episodes IV, V, and VI though. Although still a challenge to find here in North America, LEGO sent us a copy of 75137 Carbon Freezing Chamber from The Empire Strikes Back and I’m pleased to bring you this review. 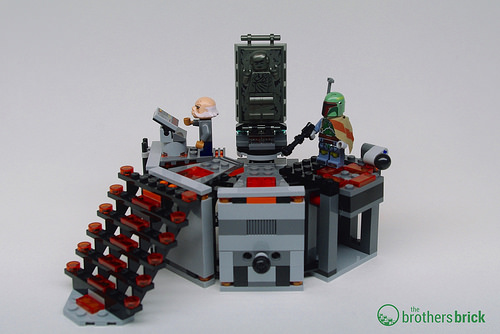 As we noted when the first official pictures of January 2016 LEGO Star Wars sets appeared back in December, the interior of Cloud City on Bespin hasn’t been depicted in a LEGO set since the rare 10123 Cloud City

75137 Carbon Freezing Chamber comes in two numbered bags. There aren’t multiple sections or vehicles in this set, so the cutoff seems to be based primarily on part count to limit the number of bricks for less-experienced builders (i.e. children — you know, LEGO’s target demographic) to work with at any given time. In case it matters, the Ugnaught is in Bag 1, while Boba Fett and Han Solo are in Bag 2.

The carbon-freezing platform has an octagonal shape, of which the set provides four sides. To achieve this eight-sided structure, the set makes extensive use of A-shaped wedges and hinge plates.

To achieve the numerous play features packed into what amounts to a fairly tiny set, the interior makes extensive use of Technic, including what I can only describe as an incredibly over-engineered feature that allows you to move Han’s carbonite block around. The entire central core of the structure is built around this mechanism, which uses a universal joint, liftarms, and an axle-pin connector that shunts back and forth in a channel at the base to push and spin an axle that in turn raises, lowers, and simultaneously spins the platform on which the carbonite stands. The instructions are perfectly clear for kids, but it’s all rather complicated in the end.

We assume based on known pricing in Europe that this set will retail for around $30 in the US (Canadian pricing remains a mystery, so I won’t even hazard a guess), with 231 pieces. Assuming that, you’re not getting a huge number of parts for the price.

In terms of useful parts, there’s plenty of trans-orange for your next volcano, as well as four of the aforementioned A-shaped wedge plates. For Boba Fett’s single helmet antenna, you get a full polybag of Clone Trooper / Mandalorian accessories, if you’re into that sort of thing.

On the plus side, I suppose, the set includes not a single sticker — the one decorated element (other than the minifigs and the block of carbonite) is the standard 2×2 tile with aurebesh “LOCK” text and computer controls.

Like 75139 Battle on Takodana, this is a location-based playset rather than a vehicle-centric set, so let’s take a look at the minifigs before focusing on the finished model.

Again, the set includes Boba Fett, Han Solo in carbonite, and an Ugnaught. 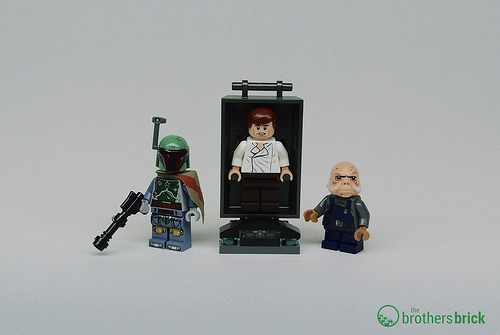 The Ugnaught’s head is softer plastic, with a fringe of white hair all around. The back looks like your standard overall print, so I won’t bother taking up space here with a rear shot.

from 2012 and the various Slave I sets of the last few years.

The Boba Fett minifig uses the new torso, printed legs, and printed pauldron/half-cape from the UCS 75060 Slave I set released in 2014, minus the fancy arm printing. The head is the same head as the one most recent “mean” characters (like First Order stormtroopers) have had. Despite being underneath his jetpack, Boba Fett’s back is fully printed. 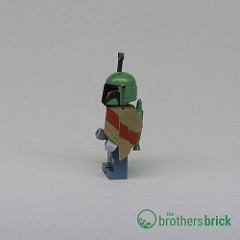 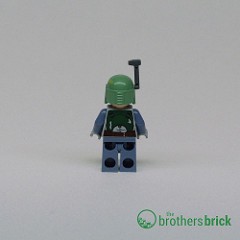 from 2012, here they are side by side. Although the torso and leg printing were both refreshed for the UCS Slave I, the main difference from the 2012 Boba Fett is that the torso’s back is also printed, as I noted above. 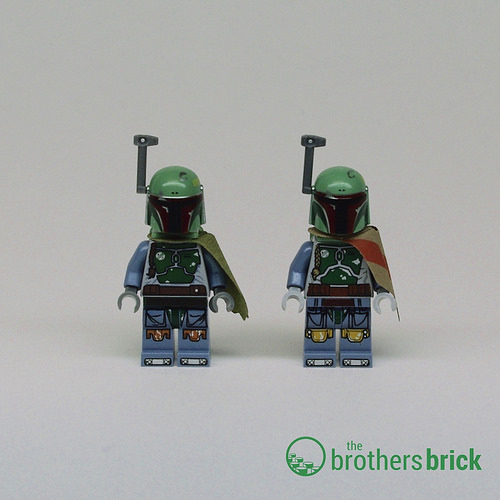 While arguably “better,” I’m not sure that this new Boba Fett was entirely necessary.

When complete, the set represents half of the octagonal carbon-freezing chamber platform, with a broad set of stairs leading up to the platform and a control panel for operating the freezing process.

Since the set only provides half of the platform, the “back” of the set feels a bit unfinished, with 1×2 and 1×1 posts and a 1×6 panel providing a lot of the height. 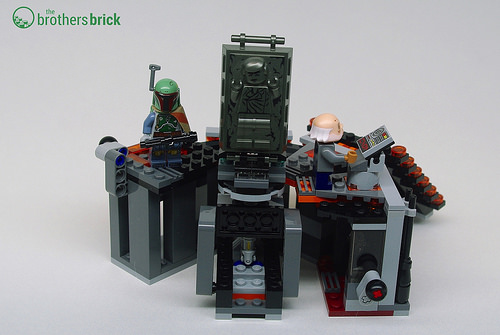 The set’s main play feature is the raising, lowering, spinning carbon-freezing platform I mentioned earlier. By pulling out the knob on the front of the platform, Han in his block of carbonite tilts backward. By spinning the knob on its axle, you can flip the block of carbonite around from Han in his minifig form to Han frozen in carbinite agony. “What if he doesn’t survive? He’s worth a lot to me.” Don’t worry, darling Boba, he’ll be fine, though (SPOILER!) you won’t. 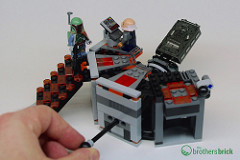 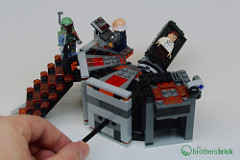 It’s a cool play feature, but a bit fiddly. The mechanism tends to get a bit stuck from time to time, and the Technic connector has a tendency to pop out of its channel. As I said earlier, it’s very complicated, for what I would argue is rather minimal reward — it’s not like Han disappears entirely and up pops the block of carbonite in his place. Now that would be a remarkable play feature!

The second play feature is the small lift that brings Han up from the bowels of Cloud City to face his doom in the carbon-freezing chamber. (Or maybe Ugnaught’s can’t climb stairs — I wasn’t paying that much attention to this detail when I last watched Empire Strickes Back…) When raised, the left can be locked into place with a swiveling bit of Technic. It’s a simple platform that moves up and down on Technic liftarms slotted between posts, but it’s quite charming. 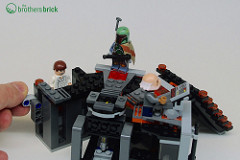 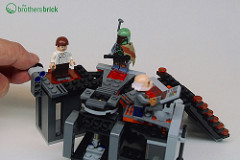 If the central carbon-freezing platform is over-engineered and the lift is charming, I can only describe the final play feature as bizarre. One of the half-octagon’s sections folds out a bit to reveal a hinge piece you can swing up and down. I suspect that this is supposed to represent Darth Vader’s torture rack, since the back of the set shows Han stuck to it (despite that device in the movie being a forward-facing rack with Han facing down, not strapped on his back). Check out the review over on Brickset for some speculation and experimentation (and agreement on the assessment of this play feature as “bizarre,” “absolutely dreadful,” “pointless,” and a “waste of pieces” — yes, I do occasionally read reviews on other sites). 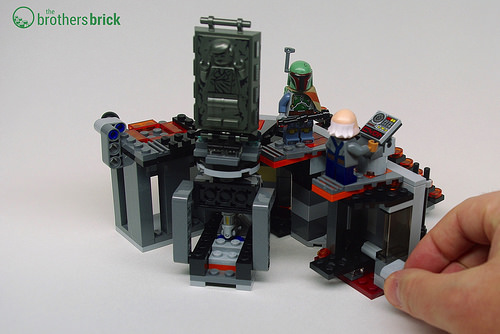 Two major play features in a set with a larger structure built from more parts would have been preferable to a set that includes this oddity, shoved in under the main platform accessible from the set’s ugly backside, and with no apparent purpose. It’s just baffling.

Astute readers will already have inferred my feelings about this set, so I’ll put this simply and bluntly: Assuming you already have enough Han Solos and Boba Fetts, skip this $30 set and buy the Ugnaught from eBay

or Bricklink. Then again, if you didn’t pick up those earlier sets and want to upgrade your Han Solo and Boba Fett, this is a lower-priced set with three desirable minifigs.

75137 Carbon Freezing Chamber includes 3 minifigs and 231 pieces. We expect it to retail for $30, and will be available from Amazon.com (where it’s currently only available from overseas third-party sellers for exorbitant prices), the LEGO Shop online, Target.com, and elsewhere.