Hot on the tails of their DOTS success, LEGO has revealed the SPOTS line of accessories for boys ages 6-12. In advance of the theme’s release on April 1st, The Brothers Brick obtained an advance copy to share our impressions of the boys’ extension of the creative tile theme. 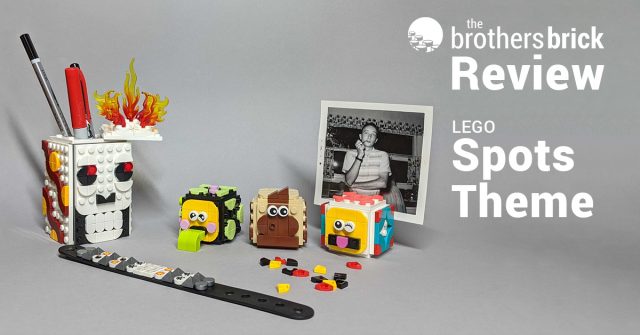 Our reviewer got his grubby little hands all over these new sets. Will he deem them totally badass or do they just blow chunks? Maybe a little of both? Read on to find out.

The packaging, instructions and contents

41926 Extra SPOTS – Series 1 is certainly my favorite of the SPOTS lineup so far. It is also the only one I have looked at so far so it is also my least favorite at the moment as well. It is too bad LEGO decided to include a “chase” tile since everyone is going to want that classic space logo tile.

The packaging for SPOTS is similar to the DOTS line without all the wussy cuteness. The instruction books were not so much instruction books but rather thin pamphlets with easy build instructions and lots of suggestions for what you can do with the SPOTS designs. The only words in each of the pamphlets were “total baditudedness,” which I think was cool but they translated it in three languages and “baditudedness” was the same in all the languages. 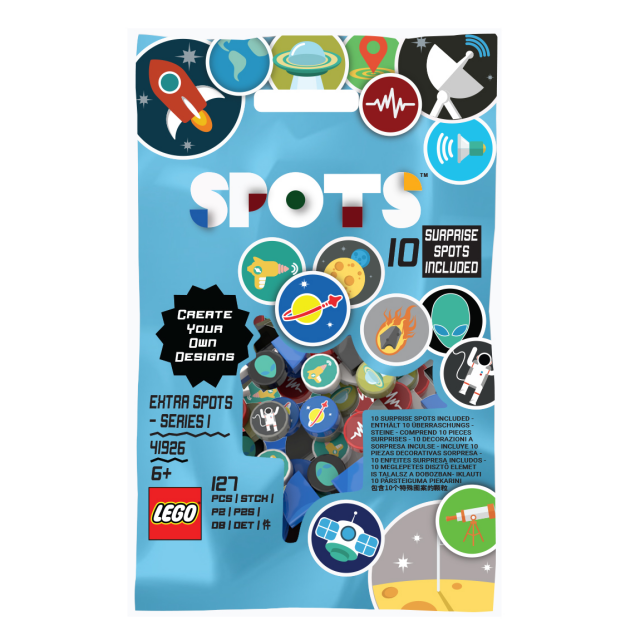 It’s like they didn’t have a word for it in French or Spanish or whatever that was. I think the three languages were a waste of space that they could have used for cool skull or barbed wire graphics. The assortment of 1×1 rounds with graphics was lots of fun. Here are a few dumped on my blue suede couch. 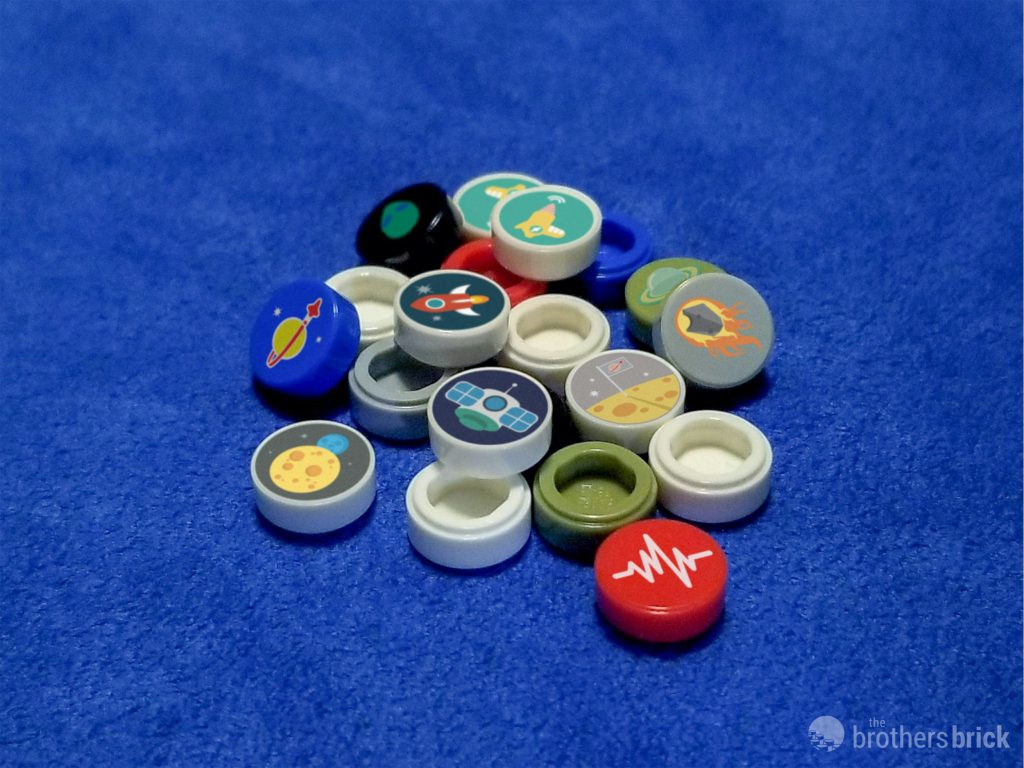 I started with the 41920 Emoji Picture Holders. The winky face with tongue out was probably my least favorite. I can’t wink without looking like I have lemon juice in my eye so this was the one I could relate to the least. The barfing one was totally rad. I wasn’t much of a fan of the wussy pink dots adorning his cheeks and everywhere else but I was willing to overlook that since that is pretty much what your face looks like when you blow chunks. 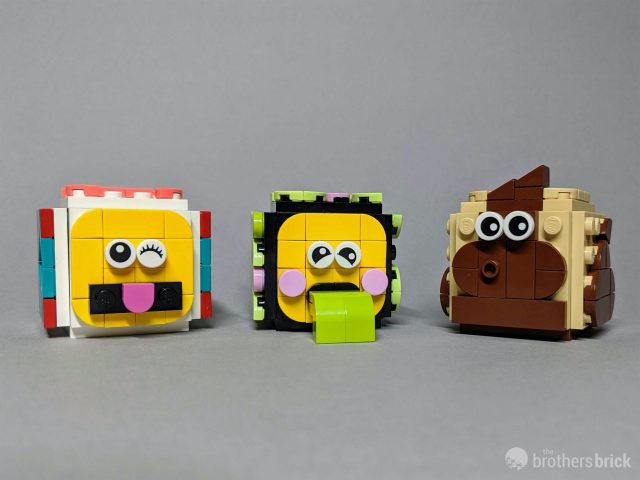 The poop emoji one is totally awesome. I could think of like a dozen uses for that, all of them important. Here they are holding three photos that I just happen to have around the house. Awesome, right? 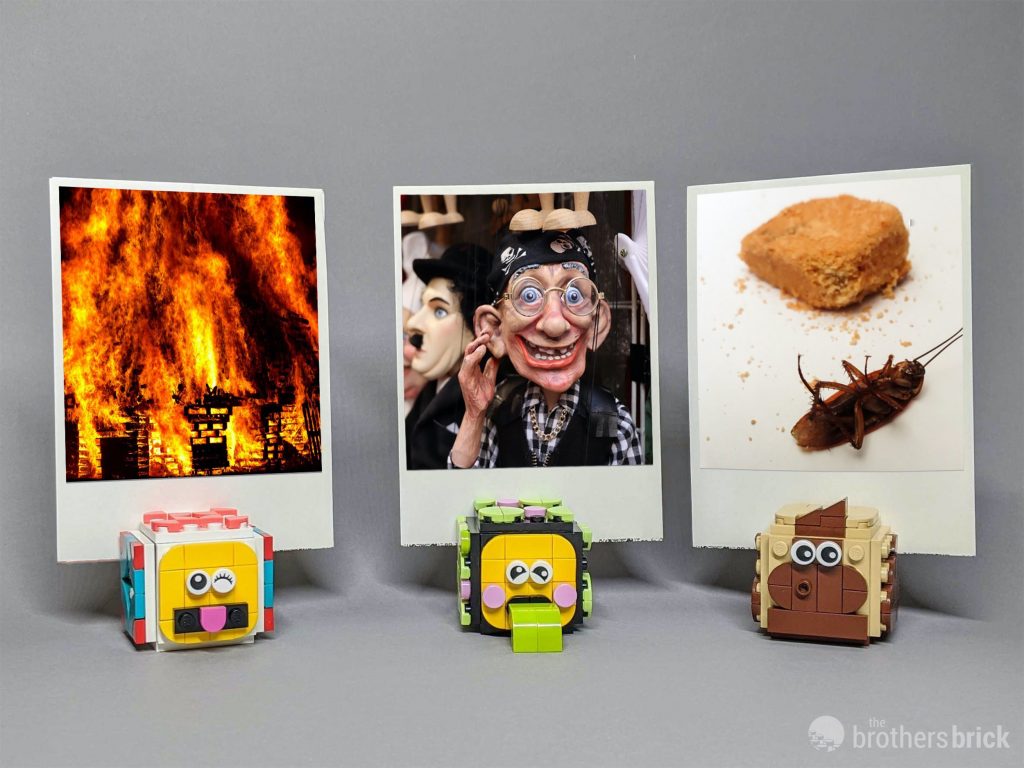 I tackled the flaming 41921 Skull Pencil Holder next. I’m glad it was fairly easy to build. Sometimes the bigger sets, like the Technic ones especially, get me all confused and frustrated and then I just want to hate the mayor of LEGOLAND. Kjeld Somebody. But this pencil holder was easy to build and I can’t stress enough how balls-out sweet it is. Because I’m a rebel I put some pens in it instead of pencils. Gotta keep it real, right? As an artist, I have a large collection of pens. The bummer was I could only hold a few in the flaming skull holder but sometimes you just have to sacrifice a few pens for great art like this badass pencil holder. 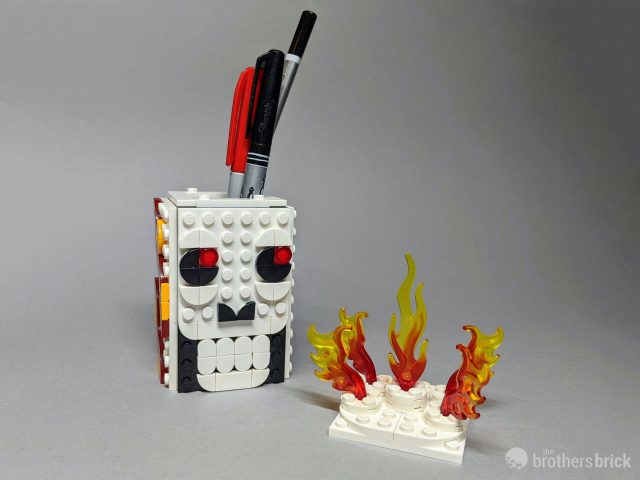 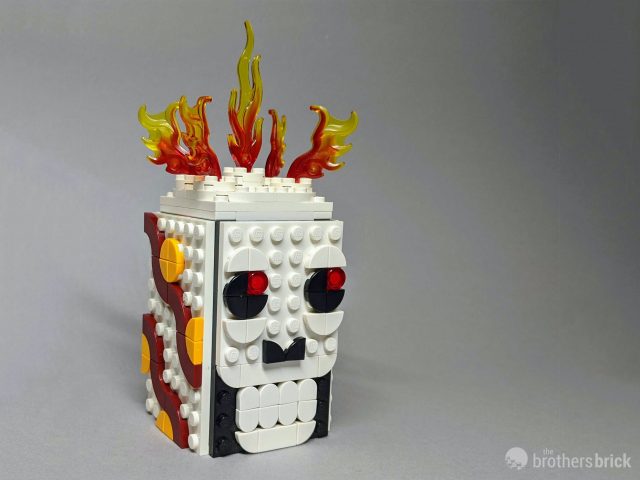 Finally, I worked on the 41924 Boys Armband and I was immediately enthralled by how dope it looked on me. The band was black, which I appreciated and a large selection of black, white, silver and red 1×1 bits enabled some totally badass patterns. It went with my already awesome aesthetic. It made me feel like doing badass stuff like fighting a giraffe or setting a paper plane on fire. The printed tiles were pretty keen too. I added some of the booster pack tiles to increase the awesomeness, and threw a few extra tiles on the table to make the photos look more extreme. The experience was made even sweeter because when I put on the armband Insane Clown Posse was playing on my Pandora. Coincidence? I think not! 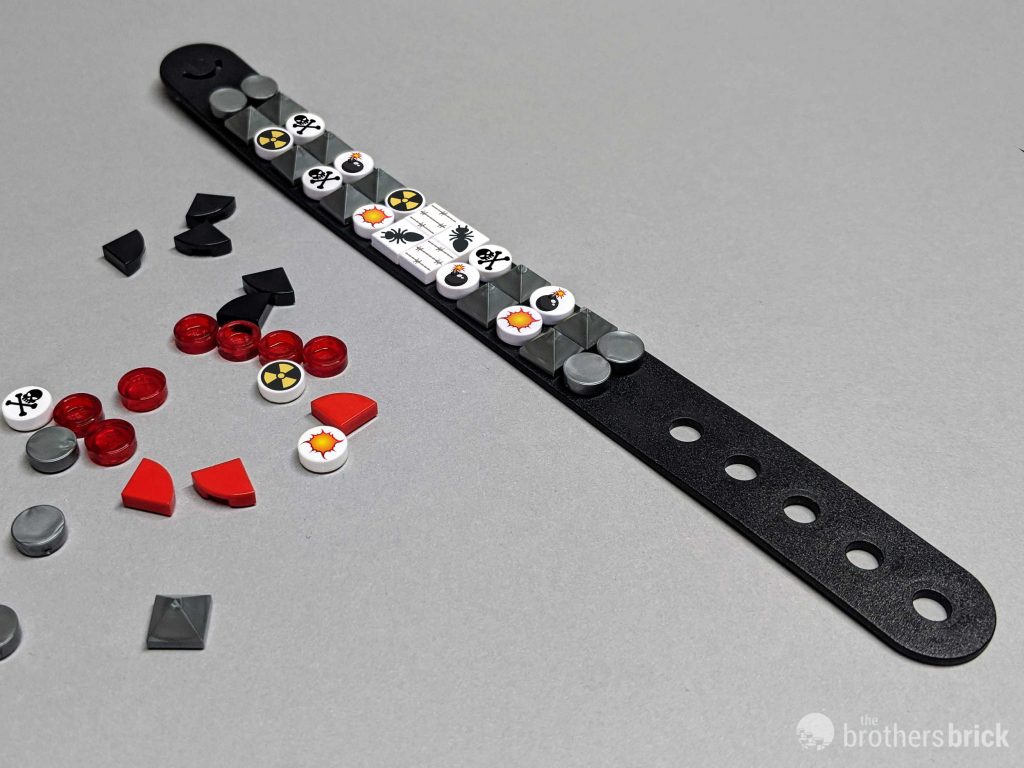 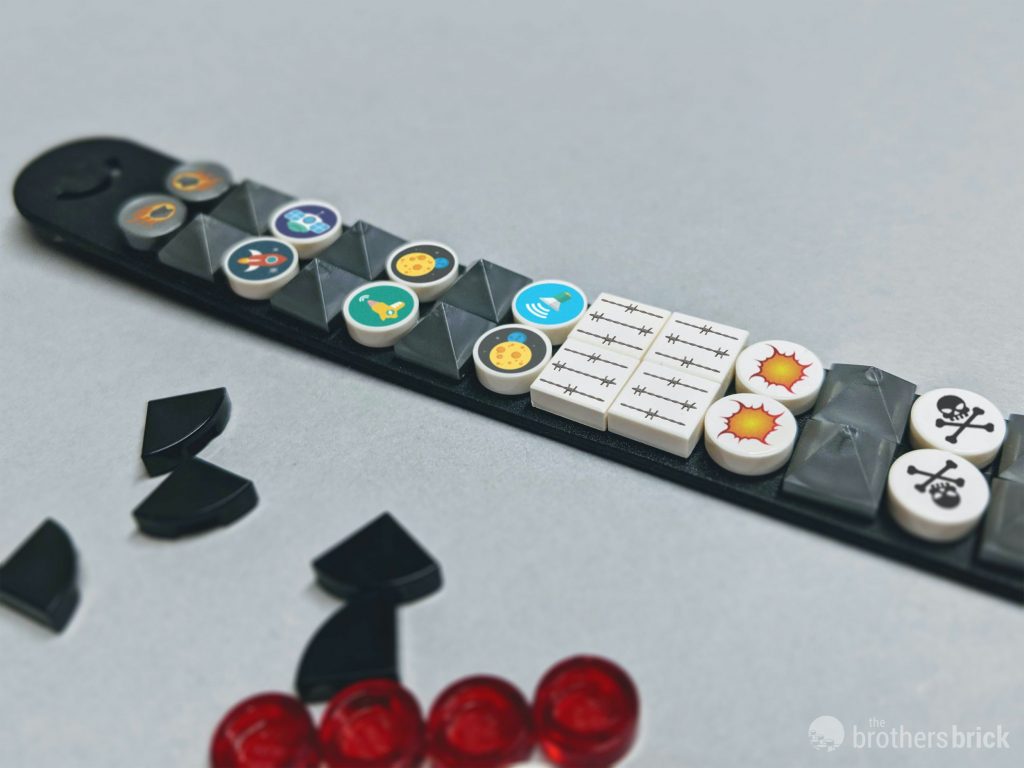 The end result is a totally badass line of bling and accessories for boys. I can imagine boys would totally think LEGO SPOTS are dope (girls probably should steer clear) but for adults like me, wearing the armband while squeezing my new poop emoji friend felt like freedom, like driving with the top down, blasting rockin’ tunes and feeling the wind blow through your sweet mullet. 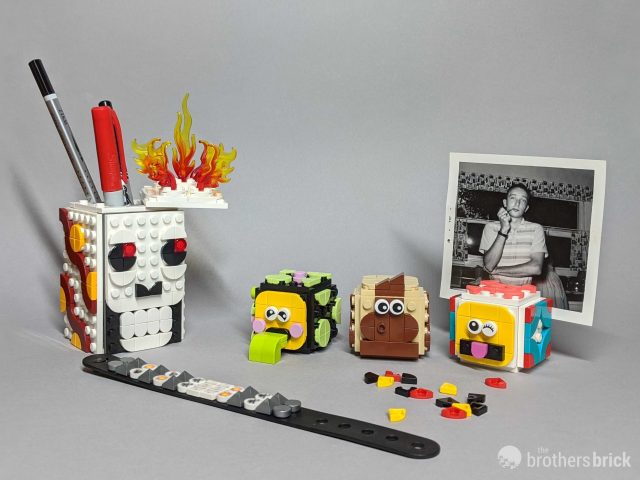 By now I’ve done a few reviews with varying degrees of enthusiasm. But I’m a grown-ass man with (admittedly) the maturity level of a ten-year-old boy, so when The Brothers Brick asked if I wanted to review the original girly DOTS line I had to pass it up for having so many wussy colors like lavender, coral, and pastel yellow. I mean, what will the other Juggalos think? Ya know? But when LEGO announced the new badass SPOTS line for boys I jumped at the chance. I could barely contain my excitement when I saw this badboy arrive in the mail. I was like “heck yeah!” Blasting through the task was totally awesome.

Once finished, I took these sets to my buddy Dave’s crib (with the top down, tunes rockin’ and feeling the wind through my mullet). He thought the armband especially was pretty dope but he pointed out that the pencil holder was too small to accommodate all my pens. I told him to get bent and that sometimes you got to sacrifice a few pens for good art. He doesn’t appreciate good art. He never did. Even though Dave is a total douchewaffle I would still wholeheartedly recommend these badass sets to anyone who isn’t a complete wuss-bag. Oh, and the price per piece is less than ten cents each, I was told I needed to say that because some people care about how much each tiny piece of plastic costs for some reason. Smell ya later nerds, peace out! I’m outty. Whoop whoop! (Mic drop.)

Check out our complete gallery of LEGO SPOTS review photos below, and don’t miss out on the official announcement article either. 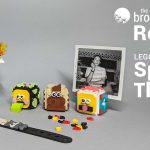 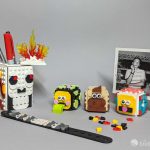 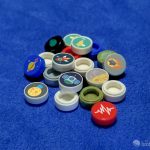 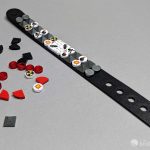 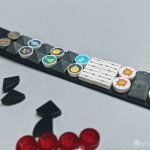 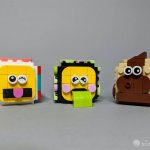 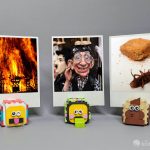 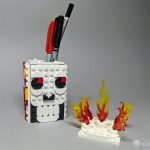 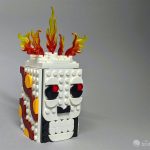 The LEGO Group did not send The Brothers Brick these sets as part of an advertising campaign. Not providing TBB with products guarantees neither coverage nor ununderstandable reviews.