This was one of those LEGO models which seemingly popped out of nowhere during the creative process. I started off fiddling around with the new mudguard pieces, thinking they might make for interesting detailing, and almost before I knew it, I had something reminiscent of a muscle car engine grille. At that point, the retro racing vibe kicked in and the rest of the model came together in a couple of hours. I think asymmetry always adds an interesting spark to a model, and so the off-centre elements — the stripe and the protruding engine — were in the plan from an early stage. The domed cockpit came late to the party, but it’s the part of the model I’m most pleased with. I feel it adds a Jetsons-esque touch of the retro-ridiculous, and makes the model more fun than it might have been otherwise. Similarly, the addition of the Friends sticker on the front wing fitted with a racing theme, but represented a change from the usual livery applied to futuristic LEGO vehicles. 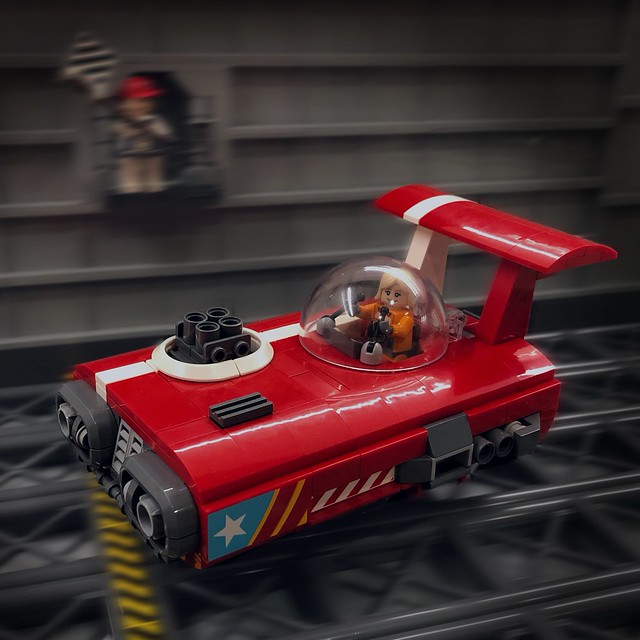 Once the model was complete I obviously had to build some kind of backdrop for it. The panel-based scenery is plain and simple, but that’s okay as I’d always planned to motion-blur the hell out of it! I know some people prefer to see their LEGO models in plain and unfiltered images, but for me this one demanded some oomph. I’ve been watching a lot of the Netflix F1 documentary recently, and I was trying to capture something of the same feel, conveying the dynamic nature of the hover car racing competition I had in my head.