There’s something about a 50s era car that gives me a deep sense of longing for a time and a place that I was never a part of. Well, it turns out so many others share in this notion. The term for that is not nostalgia but rather… anemoia. Versteinert likely knows what I mean as evidenced by this fabulously 50s convertible. The good news for anyone not a sexagenarian but still in love with that 50s style is this ride was the grand prize winner in the LEGO Ideas contest and will soon be an official Gift with Purchase set. Details as to exactly when and which sets you’d need to purchase haven’t been released yet, but our not-too-distant future is looking bright! 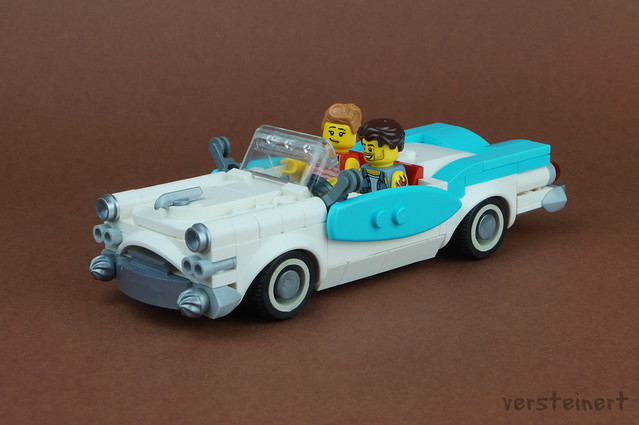 Contest rules state that any entry would need to be a generic design. I say “generic” meaning no particular model or brand, but I’m seeing a little bit of ’59 Impala, little bit of ’57 Chevy Bel Air, little bit of Ford, little bit of Cadillac and all things that make my heart go pitter-patter. The ice skate blade hood ornament is inspired, and the Dagmars (named after this actress) on the bumper are an excellent touch, but the pièce de résistance would have to be these surfboards. It would seem giving us all a sense of anemoia just might be this builder’s thing. Here’s a prior time we featured his vintage Chevy truck.

6 comments on “This sweet ride will soon be an official giveaway set!”