Can someone help me with a tech question? How do I set the parental controls so that my parents can’t watch Fox News? While The Brothers Brick IT team and I are working that out, I’d like to show you a fox of a different kind. This Kyuubi no Kitsune (Nine-tailed Fox) built by Jessica Farrell is a well-known character in Japanese folklore. Jessica tells us that this magical creature lives for an incredibly long time and grows a new tail for each century of spiritual training and wisdom. Upon gaining its ninth tail, the Kitsune has reached its full powers and its tails may begin to turn golden or white in color. Its natural form is that of an ordinary fox but the powerful Kitsune is able to shape-shift into other forms, particularly that of a beautiful young woman, and get up to all sorts of mischief! 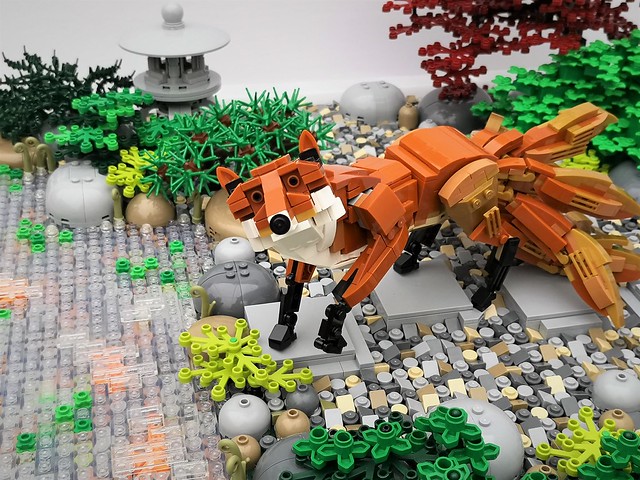 She also tells us that this model is comprised of 4,304 elements and took three weeks to design and build. I am particularly fond of the intricate textured stones and the flowing brook. The entire setting instills a tranquil feeling for me and the Kitsune’s expression exudes wisdom. Now that is a Fox network I would watch!

This wouldn’t be the first time we were enchanted by Jessica’s mythical beings. Check out this dragon and an uncanny walking house.

5 comments on “A mythical fox of a different kind”