Each year LEGO’s homebrewed Ninjago theme finds a new setting for its cast of pseudo-ninja heroes, ranging from sky pirates to medieval fantasy. The theme has always reveled in a no-holds-barred approach to mixing and matching ancient bladed weapons, advanced technology, and outrageous antagonists. The 2020 lineup’s twist is a cyberpunk aesthetic set in a digital world via a videogame. All of the Ninjago heroes find themselves dueling in the cyber realms via their avatars, bringing a Ready Player One-like plotline to LEGO’s most successful in-house theme. Today we’re looking at a trio of small sets that serve as the entry points to theme both for the consumers and the characters in the world. These arcade cabinet boxes are the transformation portals wherein Kai, Jay, and Lloyd are transformed into their digital avatars. 71714 Kai Avatar – Arcade Pod (US $9.99 | CAN $13.99 | UK £8.99), 71715 Jay Avatar – Arcade Pod (US $9.99 | CAN $13.99 | UK £8.99), and 71716 Lloyd Avatar – Arcade Pod (US $9.99 | CAN $13.99 | UK £8.99) will be available starting January 1. They contain about 50 pieces each. 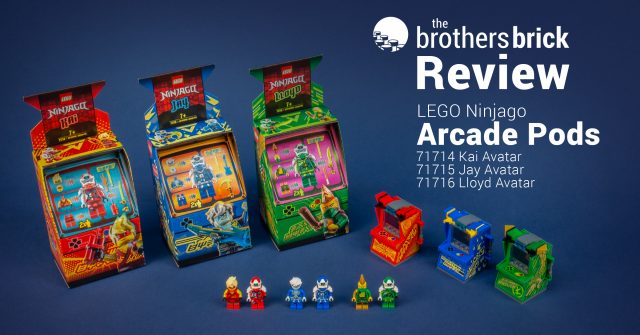 The packaging for the sets is a complex box that mimics the shape of an arcade cabinet, with the characters and their accessories displayed on the “screen.” Although it’s not immediately obvious here, each box contains two complete minifigures, one for the normal character and one for the in-game avatar. 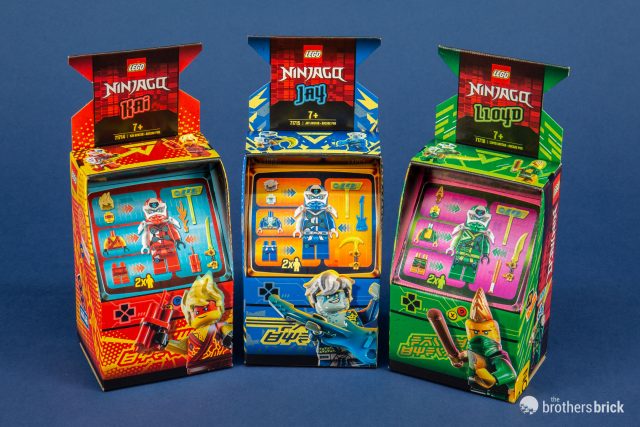 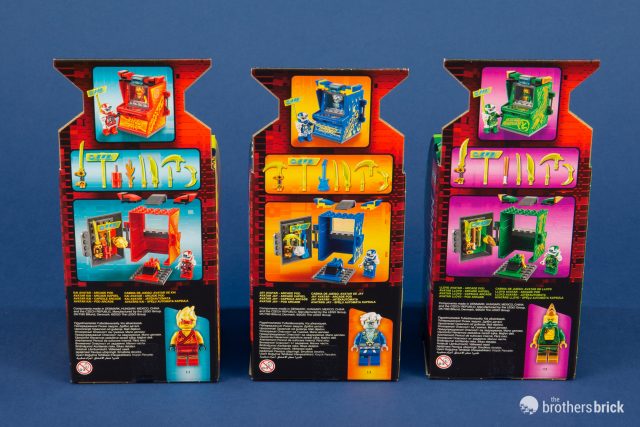 Inside, the parts are mostly packed in a single bag, plus an extra bag that’s the weapons pack. The new arcade cabinet elements are loose, along with the sticker sheet, folded instruction sheet, and a folded advertisement for the rest of the 2020 Ninjago line. Across the three sets, the sticker sheets are pretty much identical except for the colors. The large stickers that cover most of the cabinets’ surfaces might be a challenge for kids to place.

Each set also includes a row of stickers that are “extra” and can be used on whatever other LEGO parts you want. They’re sized for 1×1 round and square tiles, and 1×2 tiles. The extra stickers are featured in most of the 2020 Ninjago sets, and it’s an awesome bonus that costs LEGO almost nothing but adds a lot of value, especially for kids. 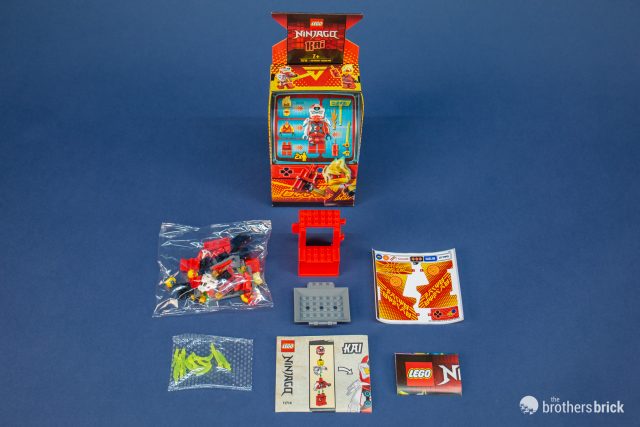 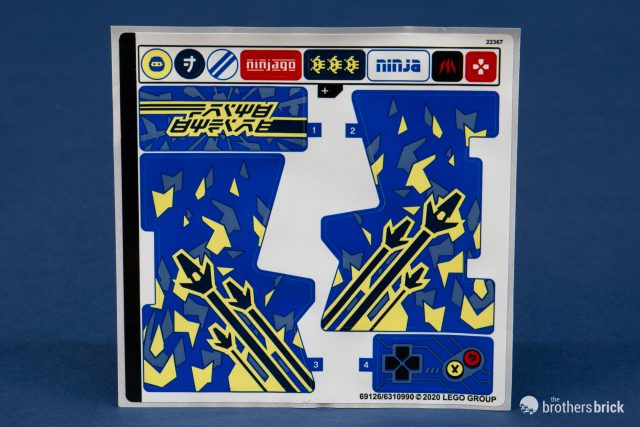 The cabinet element itself is a large, complex single-molded piece covered in stud on all the top surfaces, and a lip of anti-studs around three of the bottom edges. The door fits firmly into place on the left side using a similar bar-style hinge as the 4×6 plate trapdoor. The right side is held shut with two studs that connect to the cabinet. 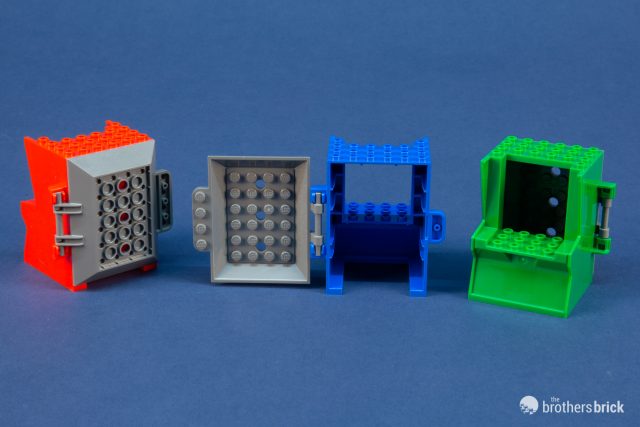 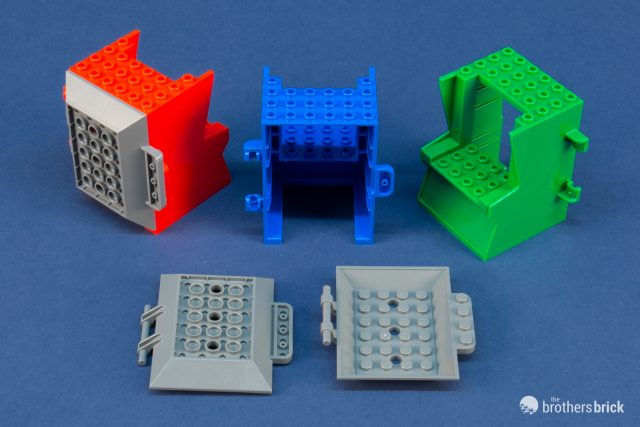 The weapons pack was introduced in 2018 and includes 10 weapons in five different styles. The trans-neon-green color is new, however. 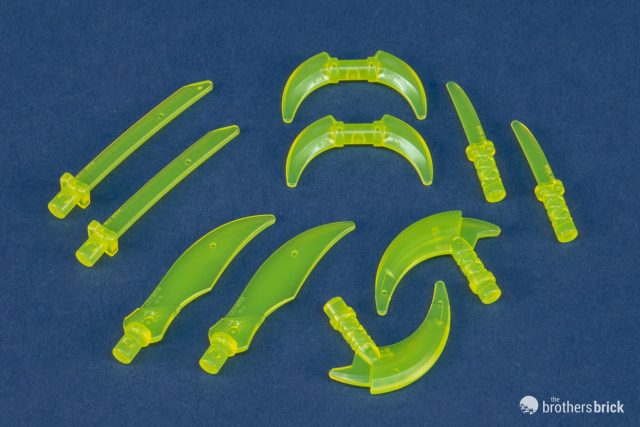 Except for color, the three sets are almost identical in construction, with only slight variances for holding unique weapons. The completed cabinets completely house their contents, giving kids an easy way to carry their favorite ninjas wherever they go. The cabinet’s front screen “displays” the avatar ninja. The cabinets are clearly oversized compared to a minifigure, but that’s unavoidable to have them include a real minifigure in the screen. Besides, the arcade cabinet shape is only half the point, since they’re meant to serve as carrying pods anyway. 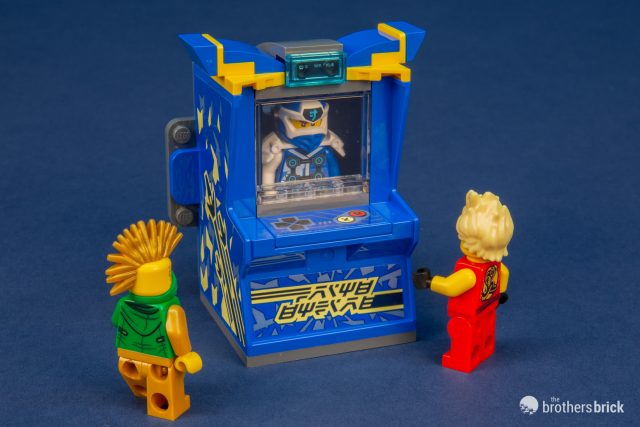 Around back, the new door element gives a satisfying “vault” feeling, and swings open to reveal the contents. 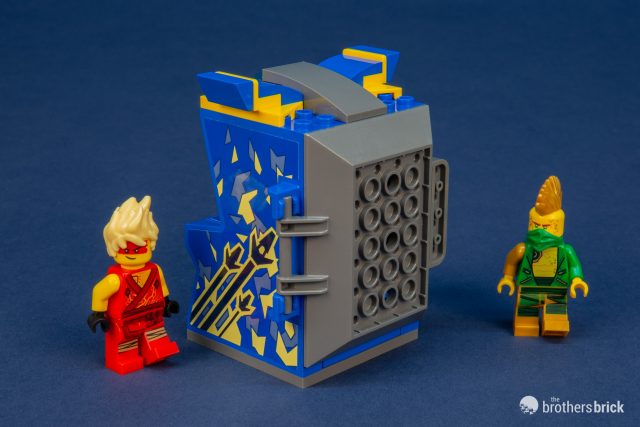 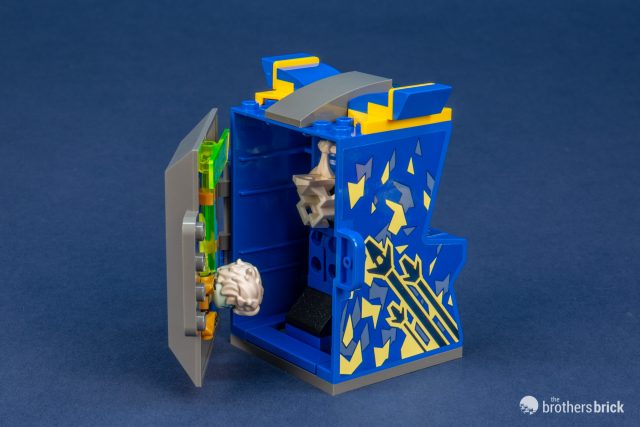 The inside surface of each door holds all the odds and ends a ninja needs. 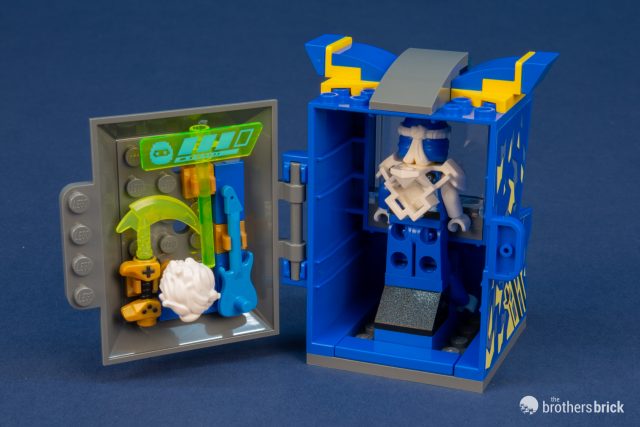 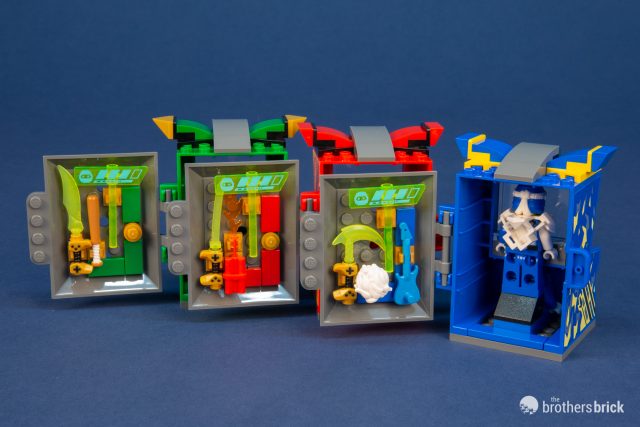 The bottom is also meant to pop off, and the regular, non-digitized minifigure can be disassembled and stored inside the box, with the torso and legs connecting to the floor, and the head mounted to the door (though it sounds a bit morbid when phrased like that). 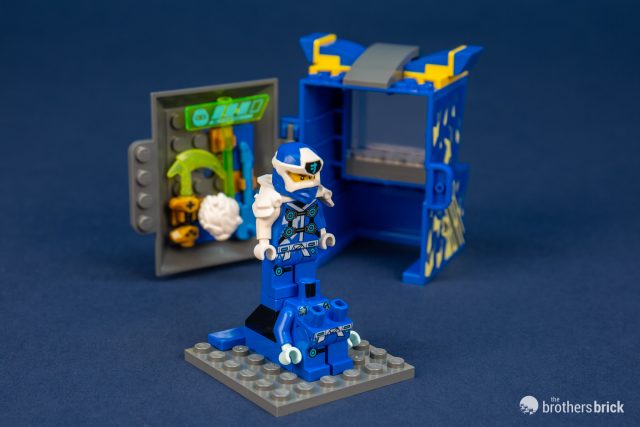 It’s no surprise that the minifigures are excellently detailed, with new prints and new colors all around. 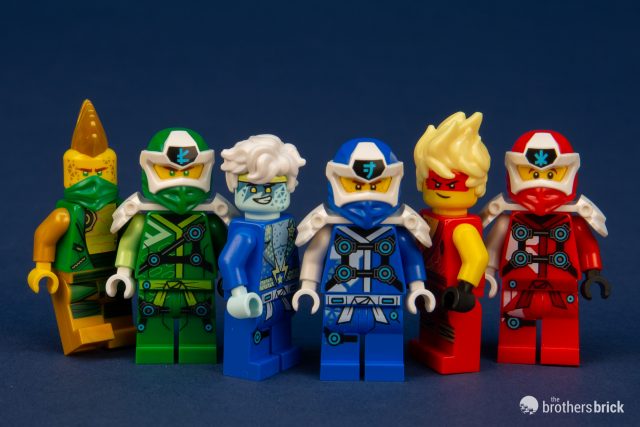 While I don’t yet know the plot surrounding the new season, the three regular figures are definitely a bit trippy. Jay (in blue) is channeling his inner 80s rocker, Kai (in red) seems to be something of a pyromaniac, and Lloyd (in green) looks ready to dispense some street justice. Jay’s tousled hair in white, Kai’s spiked hair in light yellow, and Lloyd’s mohawk are all new colors for existing hairpieces. 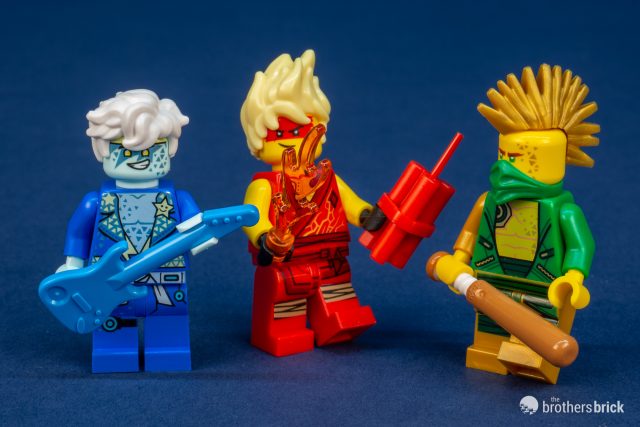 Jay is the only one of the three to have a double-sided head, so that he can belt out rock ballads. 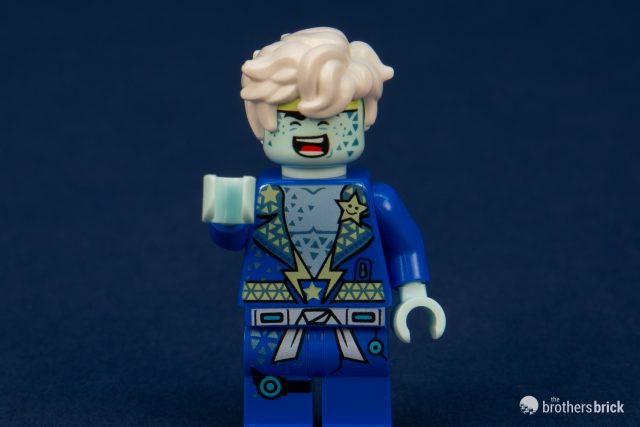 The avatars, meanwhile, come equipped with a full kit and player stats project over their heads. 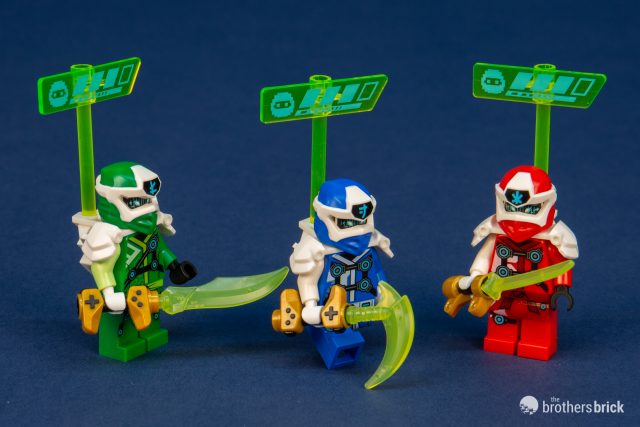 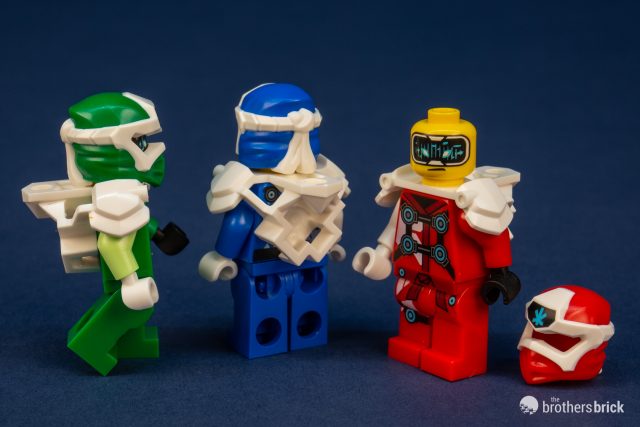 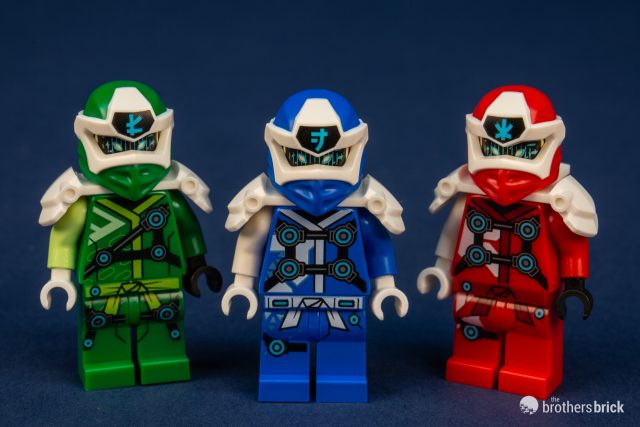 The avatar’s player stats are created with a new signpost element. The signpost appears only in trans-neon-green for the hero characters, but is available in other colors in other sets. The signpost is held up with a bar 4L (aka lightsaber blade) and slots into a new scabbard/armor element that can hold two katanas. 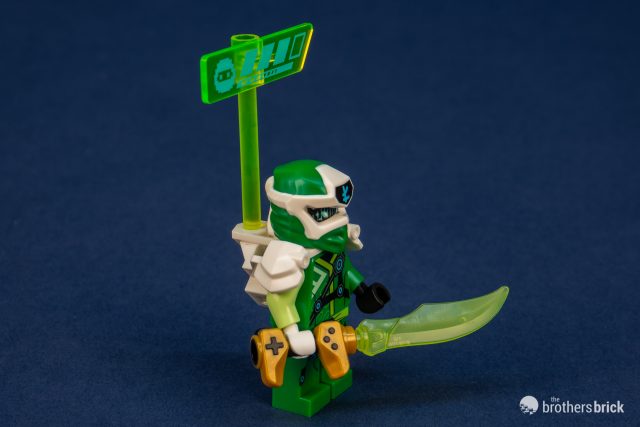 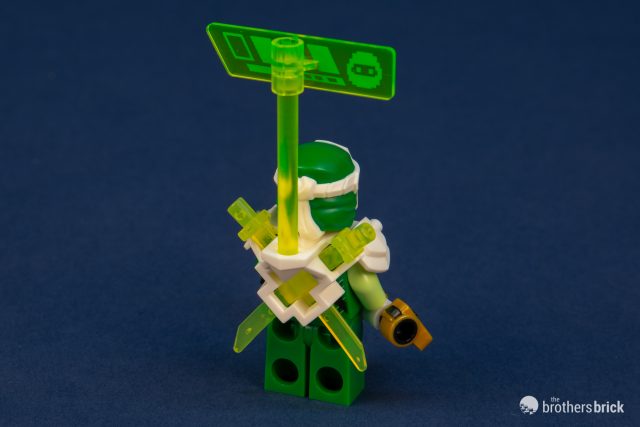 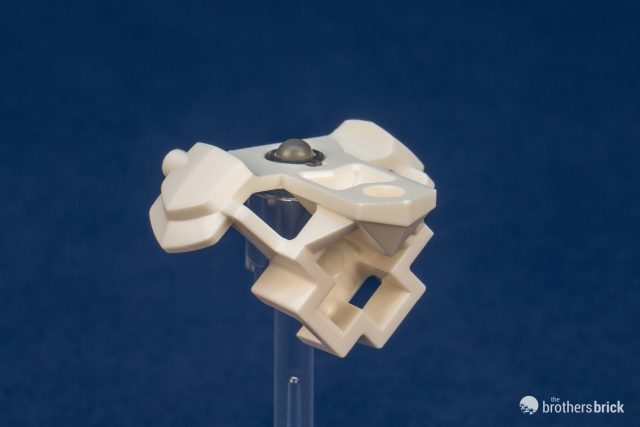 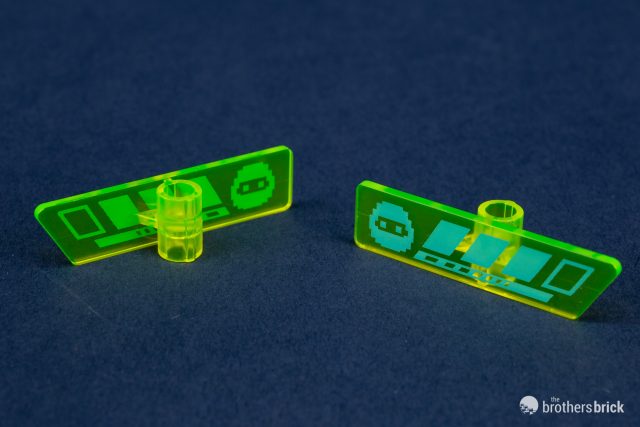 Each digital ninja also carries a unique weapon sprouting from a game controller. The controller is dual-injection molded with gold and black to create excellently detailed buttons. It has a grip in the middle, and can accept a rod on either end. The controller’s right side is also a stud. 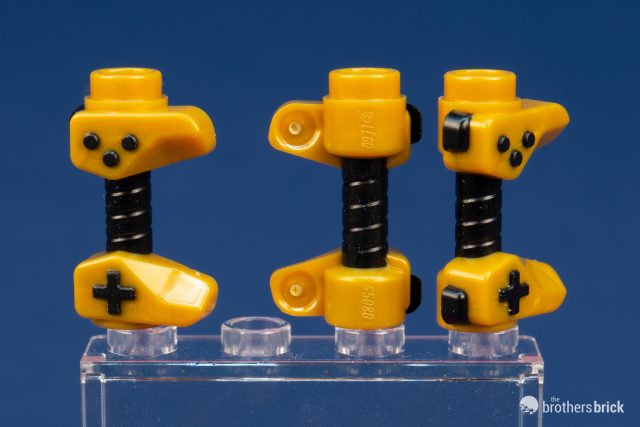 With two minifigures, a cool (albeit difficult to repurpose) arcade cabinet, and a plethora of weapons, these small sets feel like a solid buy at $9.99 USD. They might have slightly less play value than the rip-cord spinners and flyers of previous Ninjago themes, but kids love containers that let them take their favorite characters with them on the go. Adult fans might find them a bit less enticing, but they do serve as a relatively inexpensive way to get your hands on a number of cool new elements like the game controller. And as far as minifigure pods go, there’s no denying these are way cooler than the round pods that LEGO’s produced before. 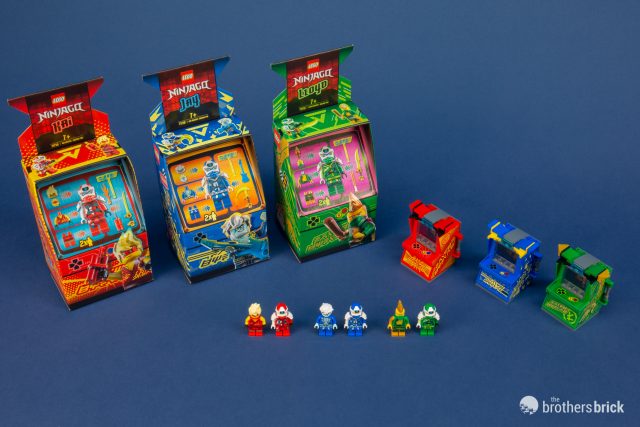 The Arcade pods will be available starting January 1 from The LEGO Shop:

You can also find them at third-party sellers on Amazon and ebay.