There is so much to love about this digital ice breaking scene by Tong Xin Jun. The striking color choices of the Land Rover Defender and the vessel it is pulling is appealing to the eye and seems to be this builder’s signature move. The broken ice patterns are nothing short of mesmerizing in their execution, their glass-smooth tops are accurate for a windswept arctic tundra. This is achieved by lying bricks and slopes on their sides in a SNOT (Studs Not On Top) configuration. The slopes change direction only at the bow of the vessel, accurately depicting how ice chunks would react to being plowed through and the transparent bits in the boat’s wake is an excellent touch. The entire composition is indeed a work of art. The scene seems a bit precarious however. Ice chunks smaller than the Land Rover may not support its weight and, as seen from this view, I squint and wonder why all the minifigs would be shirtless in a frigid arctic scene. 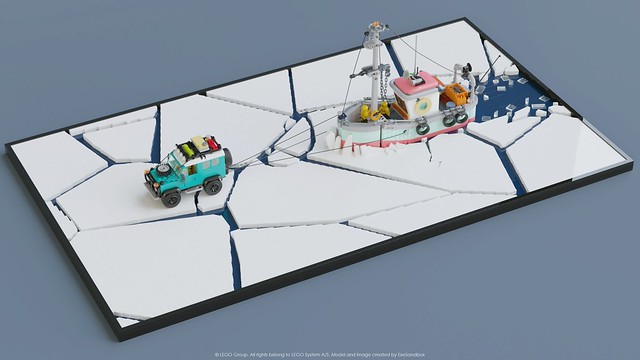 Upon closer inspection it would seem my simmering sense of dread might be validated. Perhaps the occupants of this scene already anticipate disaster as, for some reason, they’re all crash test dummies. 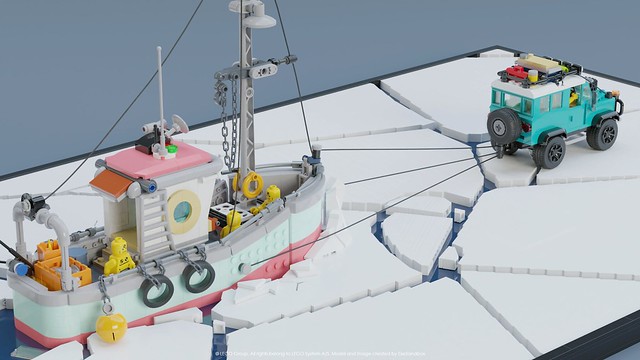 With a sprawling sky backdrop and a little bit of photographic trickery, this shot (complete with crash test dummy driver) is reminiscent of a postcard, one that would say “the weather is here, wish you were beautiful!” 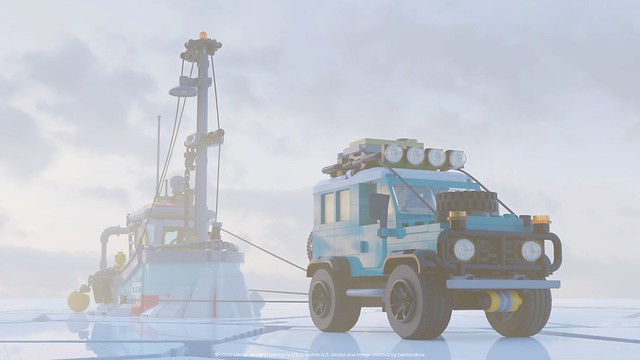 As to why everyone in this scene is a crash test dummy may be an excellent (*ahem*) icebreaker question for the builder but whatever the answer may yield, one thing for certain is we love icebreakers.