I was recently at the Caterpillar Visitors Center in Peoria, looking at the big construction vehicles made for shaping the Earth in a profound way, from the gigantic mining dump trucks to the tiny little excavators. Somewhere in between are the bulldozers, offered in nearly a dozen sizes. The biggest Caterpillar, the D11, is one huge rig, but shockingly it isn’t the biggest dozer around. That title belongs to the Komatsu D575A-3 Super Dozer, weighing in at 336,400 pounds and measuring 38+ feet long, 24+ feet wide at the blade, and 16 feet high. While Beat Felber‘s LEGO model is not quite so large, it is not small, either. The builder has a whole series of 1:28.5 scale machines, from dump trucks to mining shovels, and the Super Dozer is a super addition to the lineup. The little kid inside of me is drooling all over the keyboard as I look at this beast, because this is the bulldozer every kid imagines driving as a construction worker. 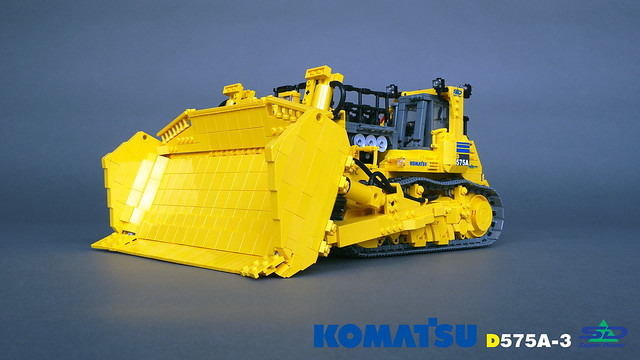 This build’s impressiveness doesn’t lie in innovative or clever parts usages, but rather in its mind-boggling engineering. Getting the proportions just right is challenging, but the builder did a phenomenal job. Custom stickers complete the exterior look, adding those details that bricks could not. And it moves, too; it is not just pretty shelf candy. Inside the impressive LEGO shaping are five motors, a battery, lots of pneumatic equipment, and two third-party SBricks for controlling it all. That’s a ton of stuff to be cramming into the limited space, but it was necessary to give it full functionality. 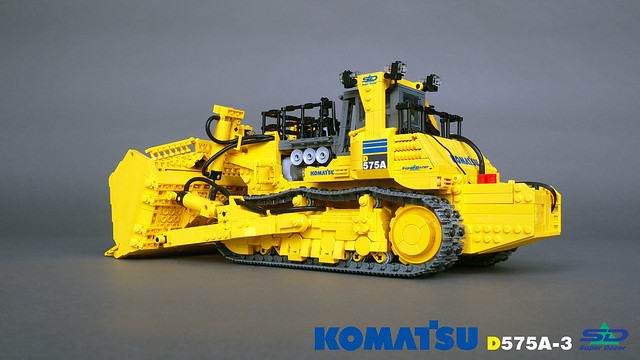 There’s a video of it in operation, too, which is pretty epic. It’s a bird, it’s a plane, no, it’s Super Dozer!

Like this earth mover? Check out the builder’s mining shovel and a crane, too.