Females make up half of the world’s population and many of all ages tell us they love building with LEGO. Yet why is it so rare that they are featured on The Brothers Brick? It’s not like we’re putting blinders on to their work, we purposefully seek out anyone building cool things with LEGO and yet the lady builder is somewhat of a rarity, even among our own staff. Rarer still is the lady builder who has designed spaceships. We see plenty of guys build spaceships, a casual perusal through our articles will confirm that, and some build with a single-minded devotion, like this dude here. Usually a spaceship builder’s write-up highlights payload capacity, armament, weaponry, and thrust and we follow suit with our articles; they build them, we write about them, the world spins and life goes on. But when someone like Malin Kylinger builds a spaceship we sit up and take notice. The reasons go far beyond the usual nice parts usage and visually pleasing aesthetics. 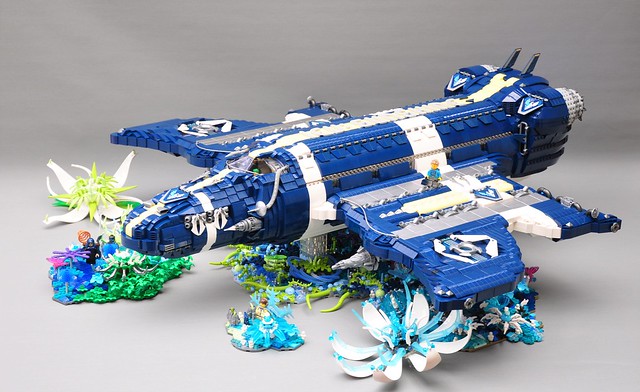 Don’t get me wrong, this piece is chock full of pleasing visual aesthetics and nice parts usage. I like the butterfly-shaped wings of the ship. I suppose I could do the usual thing and go on about this neat part or that cool piece, hit send and call it a day. But I want to state how refreshing it was to read the write-up and instead of reading about payload capacity, armament and whatnot, I was treated to a story about the interpersonal relationships between the crew members on board and the mission of the IEV Sunshine, which is to explore new planets and collect plants that can be used for medicine. Vi is the captain, her husband Yor is the ship’s mechanic, there are also two scientists on board as well as a robot named Gjor and the pilot named Tor who, according to the story, is having a birthday and all hands are prepping to celebrate .

The main photo reveals just a glimpse of the terrain, however this shot without the spaceship better showcases the rich diversity of the flora and fauna this planet has to offer. The car wash bristles make for excellent alien plant lifeforms.

An interior shot shows that the ship lacks the sterile, militaristic feel that can be expected from spaceships and instead is appointed with all the niceties of home: colorful bedspreads, pillows, tea kettles, fruits, vegetables, even a fresh baked pretzel and croissant. Given the ship’s mission, it would be expected that some of the aforementioned plant life would make it into the interior of this ship, like in a lab, but many have been employed as houseplants, bringing nature and fresh color within the ship.

With family and friends happily exploring uncharted planets in such a harmonious environment, this seems like just the kind of workplace I’d want to be a part of. I can do some science-y stuff but my skill set also includes art, writing, cracking jokes and being an all-around goofball. If your space mission has room for such a person, then I will submit my resume right away!