Sometimes the inspiration for a LEGO build comes from the builder’s head, or from some media franchise, or from some particular piece that suggests a creation just by its shape. Sometimes it is all of those, as this build by Andreas Lenander demonstrates. The build was begun by thinking about the rim from the Harley Davidson Fat Boy, which led to thinking about the airships from Avatar, which led to a very cool, very capable-looking heavy gunship. A couple of these bad boys cresting the ridge, launching missiles from the under-wing batteries, spraying lead from the nose mounted gatling gun, would be sure to send the enemy running in fright. It is like a combination of the A-10 Warthog and the AH-64 Apache, and I love it. 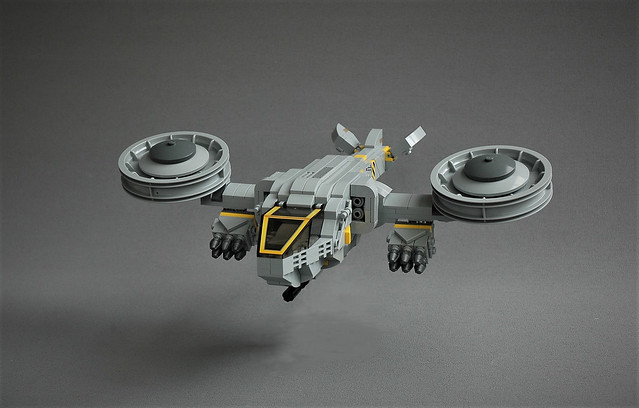 Besides the rims, the build uses some of the grenade tips that I associate with newer Batman sets as its missiles, stuck into Technic pins and then stuck into the underside of bricks. It is a simple connection, though slightly “illegal“, but it is a great one to remember when trying to reverse stud direction. The Technic axle connector on the nose looks great, too, with the four notches giving the impression of multiple barrels on the machine gun. It is a bit light on greebling, despite what one might expect from a sci-fi build, but I think it is more appropriate to make it look smooth and professionally engineered, rather than cobbled together. After all, if you want to take down some Na’vi with your military-industrial complex, you have to look sharp and pack a big punch.