When laying out my list of things I would love to build someday from LEGO bricks, a shopping mall would be far down the list. Just kidding, it would not make the list. Malls are good for one thing, in my opinion, and that is serving as locations for LEGO stores. However, if a shopping mall wanted someone to build a LEGO version of it, and was paying for it, I’d be all over that. And that is what happened for architectural wizard Rocco Buttliere. He built this stunning layout of the Hawthorn Mall, showing the expansion that they are planning to do with mixed use commercial/residential units. It looks sleek and epic, and dare I say sexy, despite being a mall.

Although he built it in microscale, Rocco has done an amazing job of capturing the look and feel of the different stores, down to the lettering on the outside. And when I say lettering, I mean abstract shapes that my mind can recognize as brand logos. Take the red circle tile and the black grille tile. It means nothing, except when placed on a tan building with classy arches, as part of a mall anchor store, it screams “Macy’s”. 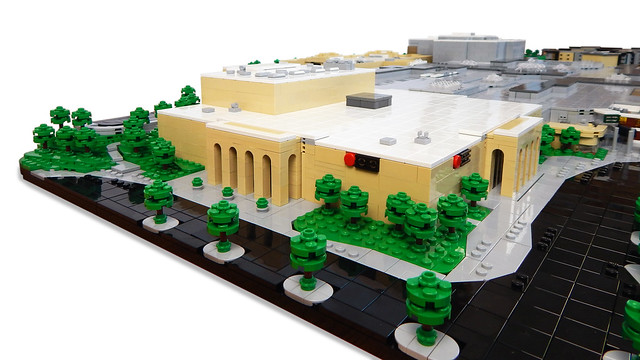 There’s a JCPenney’s that is done with some more tiny tiles and some clips, and the AMC Theaters logo (in the last photo here) is nearly spot on thanks to a 1×1 quarter circle tile for the curved “A”. Also, the ingots and 1×1 tiles with clips do a great job of simulating the various air handling units on the roof. 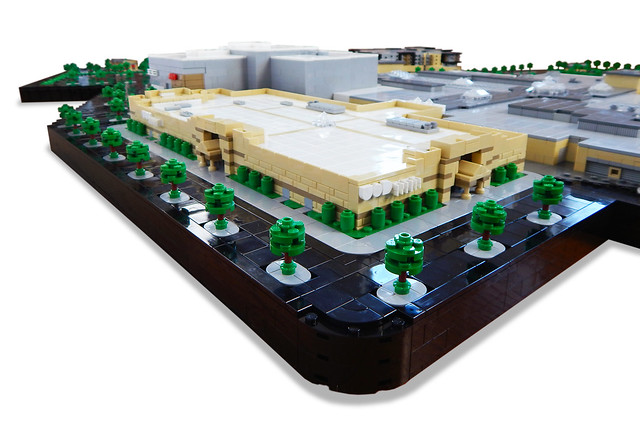 The residential area also looks great with colors and textures perfectly conveying the architectural style that is in vogue right now, that will look hopelessly dated and derelict (or is that Derelicte?) in 20 years when it all gets torn down and replaced. In this way, actually, modern architecture is perhaps best rendered in LEGO bricks of all possible media, because LEGO is also meant to be torn down. Of course, LEGO is infinitely more re-buildable and much easier and cheaper to update. Yes, I said LEGO is cheaper than something! Even my wife agrees that as far as adult hobbies go, LEGO is cheap; I could be collecting classic sports cars or Picasso originals, right? 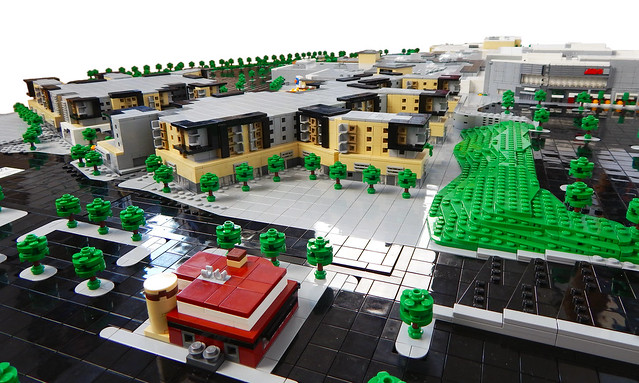