One of the magical aspects of Harry Potter and especially Hogwarts Castle is that ordinarily static things move. Pictures that in my house just hang there, with the people and things in them remaining frozen in time, always the same, in a wizarding house would be full of moving and talking, and even sentient, figures. And while we do have moving staircases in the Muggle world (we call them escalators), they don’t typically abruptly change their destinations; not so in Hogwarts, not so. The trouble is, we have not seen a single good moving staircase or moving picture in any official Harry Potter set. Fortunately for us, Jonas Kramm has filled the void with a brilliant build depicting both. There are innumerable gilt frames filled with magical chaps and dames, plus one of those moving staircases that so befuddled a young Potter and his pals in their early days of school. The moving functions are elegantly integrated and perfectly executed. 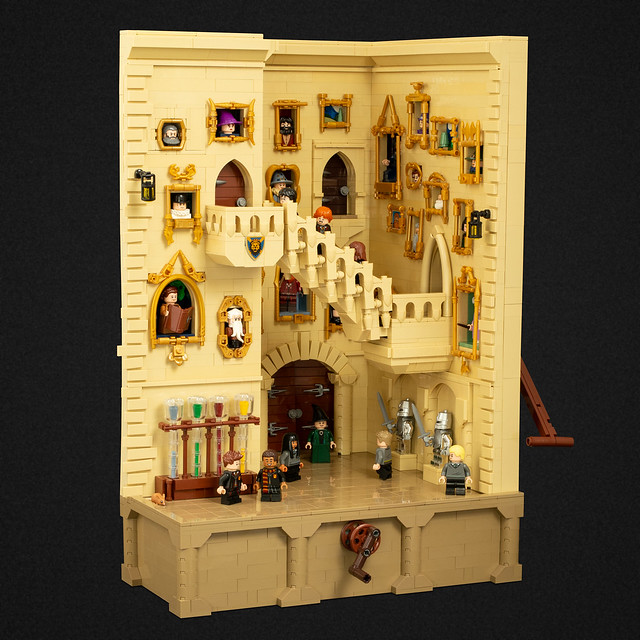 The walls are just ho-hum tan (just kidding; check out some of the SNOT-work around the picture frames, plus those arches on the stair railings using the new arch elements), but the frames use practically every pearl gold part in LEGO’s inventory, from leaves, bananas, and crowns, to unicorn horns, halberds, spears, elf swords, and keys. The figures inside the frames are expertly constructed, too, each to fit its frame. Of course, there is that poor old 2D fellow in the back corner; one feels badly for him. But if all that weren’t enough, it moves! The crank in the front moves the pictures, and the one on the side moves the stairs. Check out the action in these GIFs: