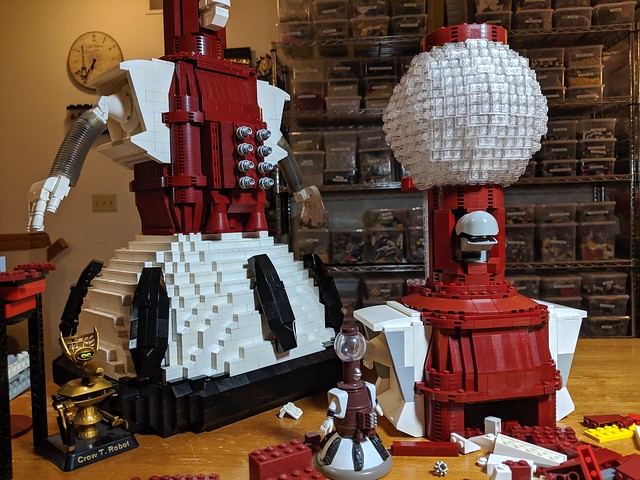 Spoiler alert: No. No, he will not.

Feeling guilty about not working on Tom. I posted an animation test to Twitter to pretend there’s been progress.

Okay, Tom’s head is in decent shape for now. Time to start pressing forward with the torso. I’m not sure how I want to handle the gear mounting — the block that I built for the proof of concept won’t really work as it’s too wide to be “skinned” with the rest of the torso. So I’m starting from scratch. Again.

I’m working with a “top-down” approach for the moment. A massive Technic turntable will be responsible for the head rotation. The eyeball stalk is what will push up against the underside of his beak, allowing it to open. 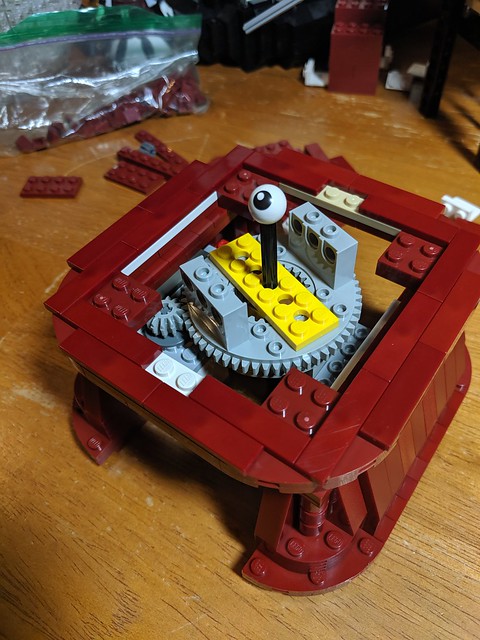 Sure, I could have used a regular black Technic ball to cap the rod, but thanks to buying dozens of Mixels I have a several dozen of the eyeball version on hand; I might as well use something fun. No one will ever see it, but it makes me smile knowing it’s in there.

I’ve got a first pass on the shoulders done. Looks like I need to order more white inverted slopes. Because they’re stupidly rare. Of course.

Slow progress is slow. But New!Tom is a few inches taller now.

The gearing for the arms are pretty much in. I just seated things as best I could while building out his shoulders. There’s no real planning here (what a shock), but the rods aren’t touching so there should be plenty of room to handle making remote connections once I’m down past the hoverskirt. It’s even mostly sturdy. I’ve pretty much kept the shaping of the shoulders the same as Old!Tom, although I’m trying out a newer curved slope for the central top portion. 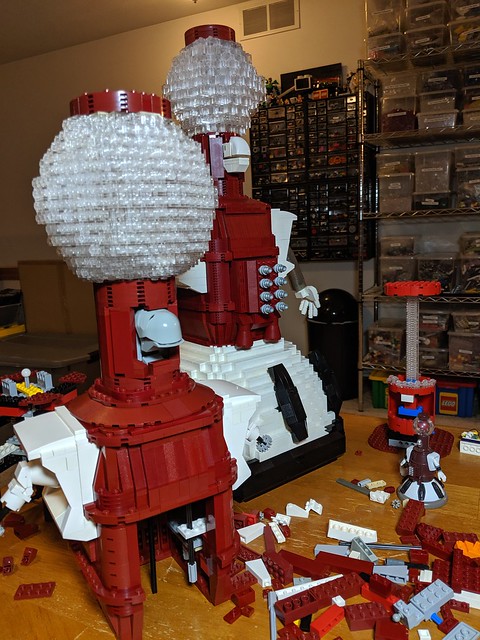 From the rear, Tom’s torso is more or less done. It’s pretty much the same shaping as the old version, but with a little extra effort to show some curves to the barrel. 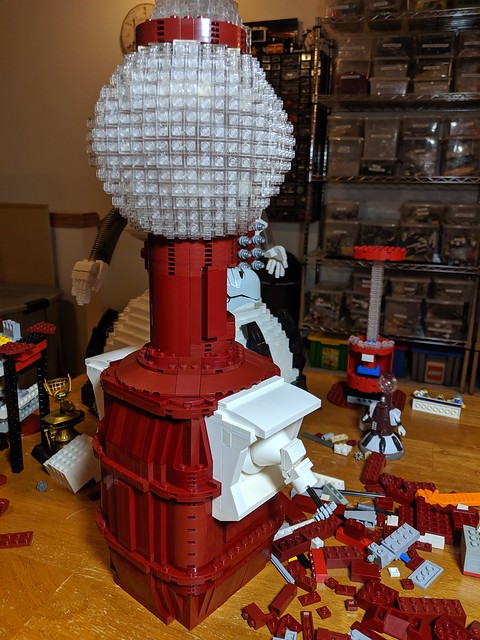 Still kind of boxy, but that’s LEGO for you.

Today I’m going to make a new version of Tom’s engine block. Old!Tom had a decent effort that still reads pretty close to the real thing. But it’s a little small, and there are so many shiny new parts to use… 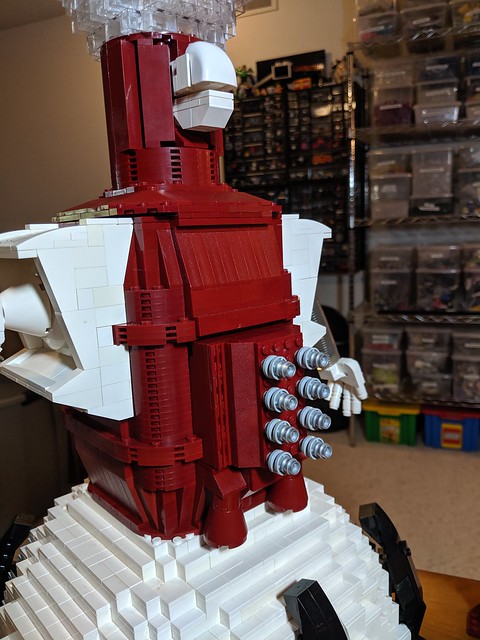 Mainly I wanted to improve the silver color block, and the detailing along the side. I thought those new 2×2 plate with a center stud would let me align things easily without a lot of obvious seams. Looks like I was right. 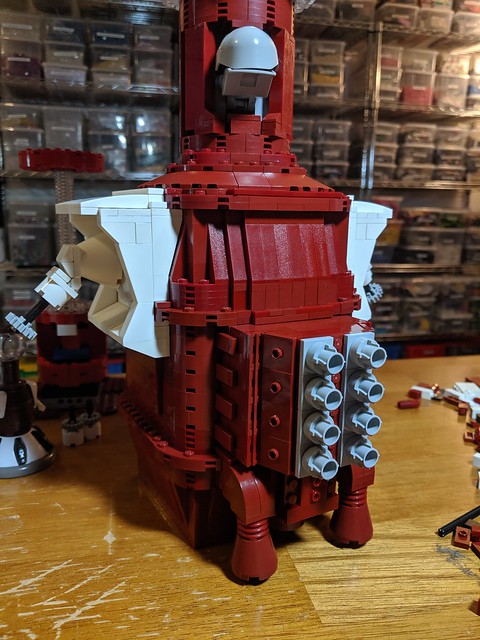 And with Tom’s torso more or less done, I can start thinking about the Technic aspects of this project again. First step: Get an idea of how much vertical distance I need to clear. I want to have controls off to the side, so I could run him at a distance at a convention or show. I might even figure out how to drive him with remote controls. That’s the long term dream, anyway.

I’m making use of my stash of Duplo to get a combination of height and stability without a lot of extra weight. Old!Tom is compact and light, but I have a feeling this new upscaled version is going to be a bit heftier no matter what. 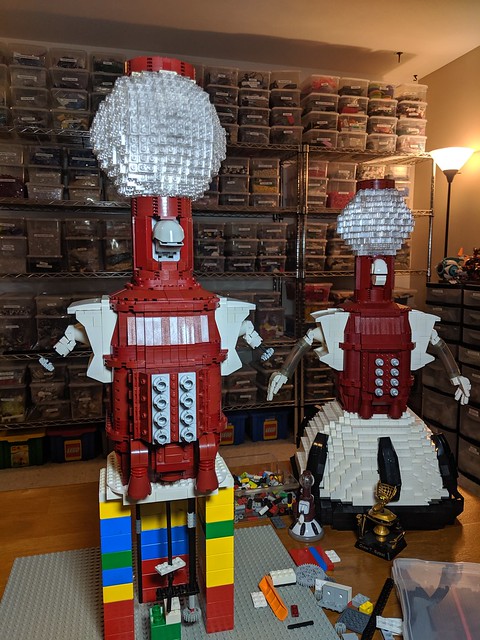 Time for another “proof of concept” building day. I’ve got Tom’s control rods running down to where I feel the base of the build should be, but I need to make those gearings work from the side of the baseplate I’m mounting things on. That’s a few 90-degree turns, as well as figuring out how to deal with the fact that two of the control rods are really close to each other. I didn’t think that would be a big problem…and maybe for a more accomplished Technic builder it wouldn’t be. But I’m going to be deep into kludge territory on this.

After a few hours of fiddling, I’ve got all the rotation joints working at a distance! I’ve rigged up some X-Pod containers to give me some easier controls to work with. 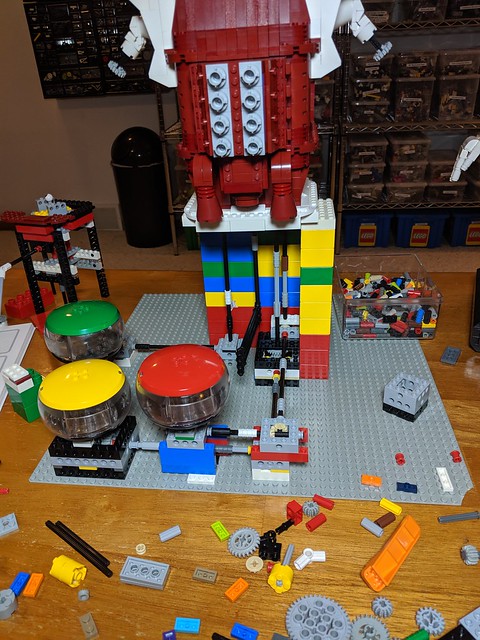 There’s already a couple of problems to deal with — there’s a lot of weight being turned on the stability of a Tecnhic rod already, and that’s only going to get worse down the road. Also, trying to connect and disconnect the rods as I played with the turns required a lot of awkwardly reaching into Tom’s chest from the underside. What if things break later on? Because I’m pretty sure they will. Also, I haven’t figured out how to handle the mouth articulation at a distance yet.

Upgrade time! I came up with a way to get into Tom’s chest: I ripped out the engine block and then reconnected it with a magnet mount. It’s stable for display, and one less thing to fall apart down the road. 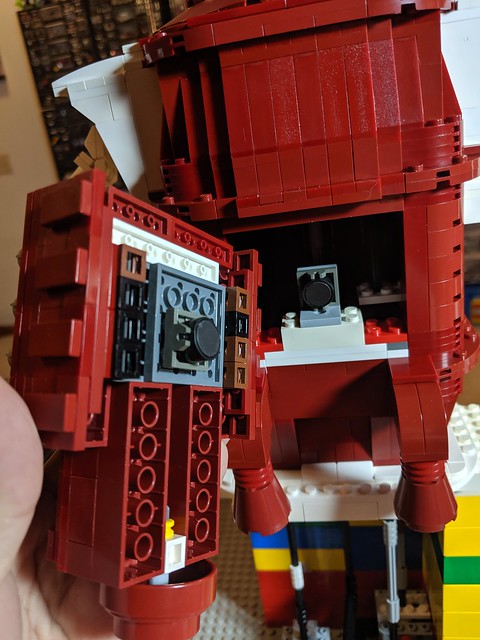 I finally figured out a way to handle the mouth articulation at a distance. It required a few iterations of goofy things (like a very ill-advised series of teeter-totter connections) to just realize I needed a simple “turn rotation into up and down motion” mechanic. A quick trip to my Technic reference books later and I was all set. Book learnin’ is where it’s at, friends.

The next step was to build a “remote control box” to keep the puppetry stuff organized. There’s nothing special about this build, just a few 90-degree turns and a knob for the mouth control. But for a Technic Noob like myself, it still feels like an accomplishment. 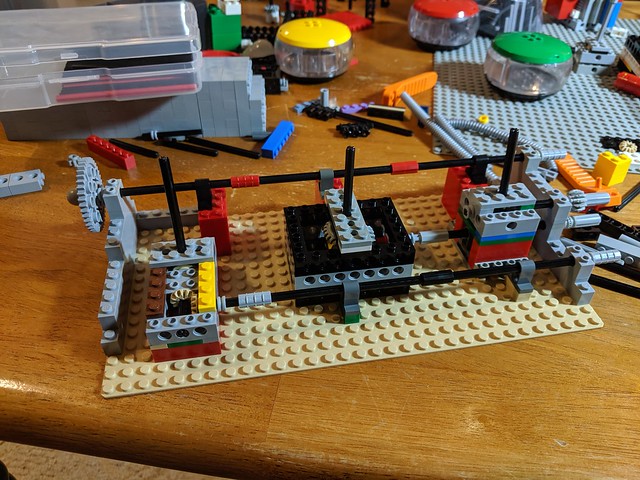 Best of all, I realized I could work in another bit of Mystery Science Theater 3000 lore by making the controls into the shape of the “Mad Lights” — the little three-light alarm that indicates when “Movie Sign!” hits and the cast needs to dash from the bridge into the Mystery Science Theater itself. A version of that box has been on the MST3k desk/puppet stage in almost every episode. I’m not matching it to any particular incarnation, instead opting for my own little bit of styling. 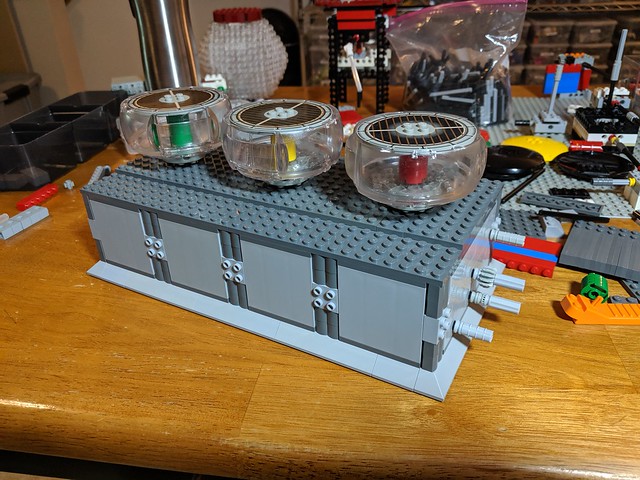 With the endpoints for the controls established in the Mad Lights, I can now finalize the control runs from the edge of the base into Tom Servo’s gearing. Gratingly, I noticed the broken corner of the baseplate is on the front side of the build. It’s a little too late to rotate it now…I’ll just have to make the stand a little more elaborate to hide that. 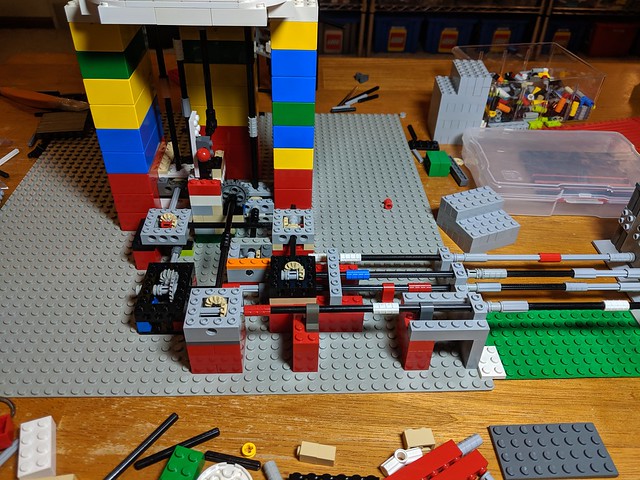 I know this is a mess, and I know there have to be more stable and powerful ways to do things. But it’s working, and that’s good enough for now. At the end of the day, it feels like I’ve made some real progress. 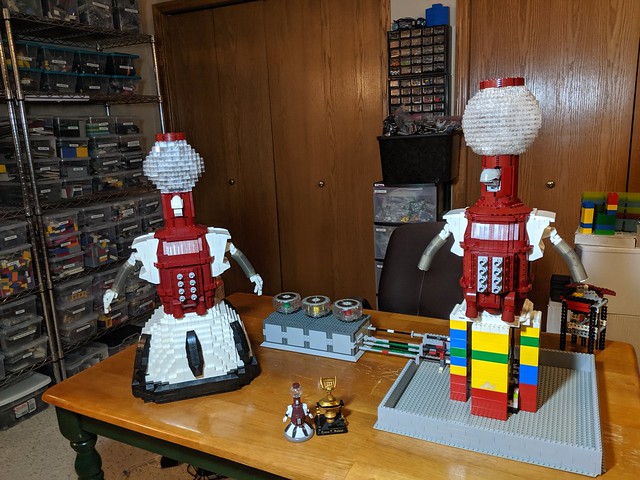 I celebrated by cutting some Life on Mars Areo tubing to length for the “springs” on Tom’s arms. This is the same part I used on Old!Tom, and it’s a nice little bit of continuity between the builds. Luckily, even though those tubes are kind of rare, they’re also very cheap on the aftermarket.

Sure, I have a sense of accomplishment now, but there’s a deceptively long way still to go. We’ll get there in Part Three, most likely. Or maybe we won’t. One way or another, be on the lookout for that next part soon!

In the meantime, let’s talk about what LEGO building challenges have frustrated you the most. What technique or theme just daunted you, and what got you past it? Sound off in the comments!