The Phantom Menace, released 20 years ago this month, is a polarising movie. Many Star Wars fans (particularly older fans raised on the Original Trilogy) would say it’s their least favourite in the series of films. However, despite its flaws, Episode 1 brought some amazing new things to the Star Wars universe — kick-ass lightsaber battles, Pod Racing, and the planet of Coruscant amongst them. The capital world of both Galactic Republic then Empire is another classic “single environment planet” in the grand Star Wars tradition, but rather than a desert, forest, or ice world, Coruscant is home to a massive planet-spanning city. The movie gave us plenty of the city’s towering buildings and penthouse suites, but here we get a closer look at the seedier underbelly of the metropolis in Dayton‘s impressive LEGO diorama. 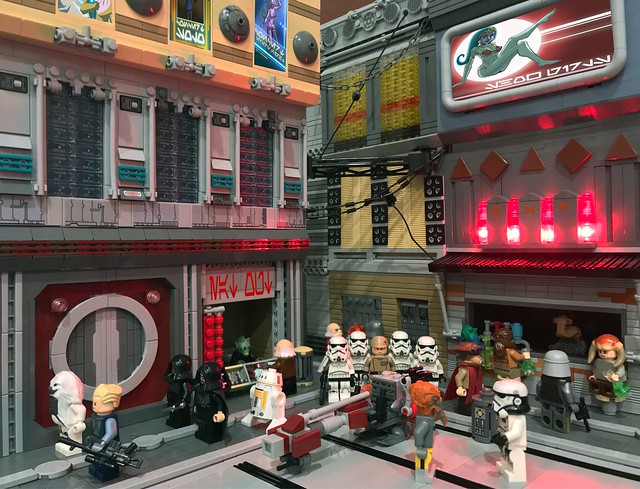 This trip into the lower levels of Coruscant is impressively detailed, and carries a Blade Runner-esque cyberpunk vibe along with its Star Wars inspiration. The Imperial Patrol works its way through the alleys, through crowds of shady-looking characters enjoying street food and drinks. The presentation is excellent, nicely-lit, with the custom advertising billboards and smatterings of Aurebesh text a smart touch. And don’t miss the use of laser shooter pieces to provide the pattern on the circular sliding door — it’s a little detail, but it’s this sort of thing that helps create layers of texture to pull the viewer’s eye into the image.