Home to almost 40 million people, greater Tokyo is the world’s most populous metropolitan area. Space is at a premium, so houses tend to be small and built closely together. To fight fires in the dense urban areas, the Tokyo Fire Department has a large fleet of exceedingly small fire engines. They are narrow enough to fit the streets between the houses. They also have a relatively short wheelbase, so that they can navigate tight corners. In preparation for a visit to Japan Brickfest later this year, I’m building a small collection of Japanese emergency vehicles. I’ve been looking forward to building the fire engine the most, so I’ve kept that for last. 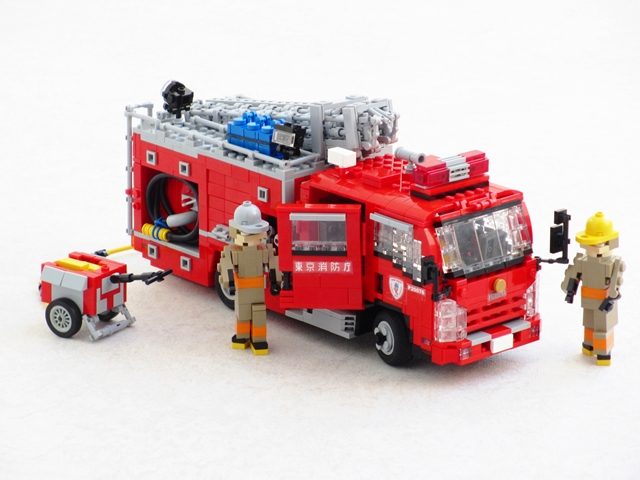 At a first glance, it may not look all that small, especially if you are used to LEGO minifigure-scale builds. However, if you compare the pumper to the two fire fighters, it is obvious that it is a lot smaller than pumpers from Europe or the US. It is only about as wide as a typical American car and not all that much longer. Nonetheless, it has everything you’d expect from its larger counterparts and a little more. It is nice and red, obviously. It has pump control panels with connections for fire hoses, a few ladders stored on top and lots of compartments for tools. Typical for Japanese pumpers, it also houses a little separate wheeled cart in the back. Fire fighters use this to transport hoses down even narrower alleys. The model is like a miniature version of a miniature fire engine.

2 comments on “A small fire engine for a large city”