I am not a miner, but I imagine that it is not quite as fun and exciting as the 1990s Rock Raiders LEGO theme made it look. Nevertheless, I have fond memories of this action-packed adventure theme. My nostalgia was somewhat dormant for a long time, until I had the privilege to write about a Rock Raiders tunneling drone here on the Brothers Brick. The creation made me feel so good that I felt compelled had to make my own Rock Raiders-themed model. And here it is; the “Dolomite Destroyer” (named in the honour of the iconic 4940 Granite Grinder LEGO set). 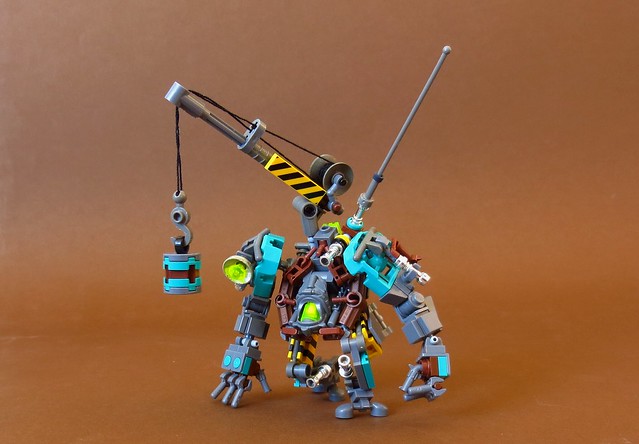 I have experimented with proportions a bit for this model. Just a simple colour scheme would not cut it for a Rock Raiders build. It had to be bulky and rough. The whole thing started with a Throwbot/Slizer shoulder/hand piece as the mech’s arms and continued from there. The second central part was an Atlantis minifig helmet within the body. I finished the model off with a little crane because I think cranes look so cool and industrial. While this model was fun to build, I will be scrapping it to build another creation in this style later on.

2 comments on “Time to destroy dolomite”