It seems as though building a scene set in the year 2049 is the thing to do these days, no doubt in part because of the new Bladerunner film. However, this scene by Eddy Plu depicting Tokyo in the year 2049 has some great elements that set it apart from the crowd. Usually when building LEGO scenes, builders tend to focus on the background, and rarely is there anything in the foreground. But here, the Eddy has added some leaves and other objects to the foreground, giving the scene a higher degree of depth and making it much more interesting to admire. 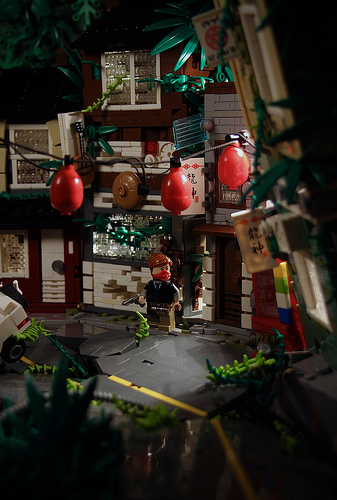 Also, don’t overlook the cracked and uneven street, which makes it seem like either an explosion or an earthquake has happened in the future, and the nice curve the sidewalk and buildings situated on it seems to follow suit in looking precarious.