Welcome to Day 24, the last day of our LEGO Advent Calendar countdown. Each day, we’ve revealed the three mini-builds from the LEGO Star Wars, LEGO Friends, and LEGO City 2018 advent calendars along with commentary from The Brothers Brick team. 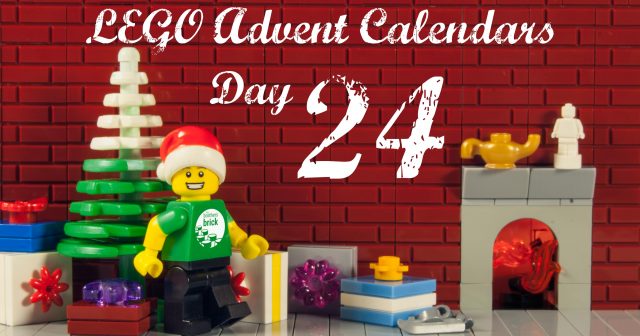 If you’re opening one (or more) of these advent calendars along with us, we’ve made sure the pictures and commentary on each day’s models will be behind a jump so we don’t accidentally ruin the surprise. What will we score for Day 24, the final day?

For Day 24, we have a snowman from Star Wars, a train ornament from Friends, and a Santa minifigure from City. 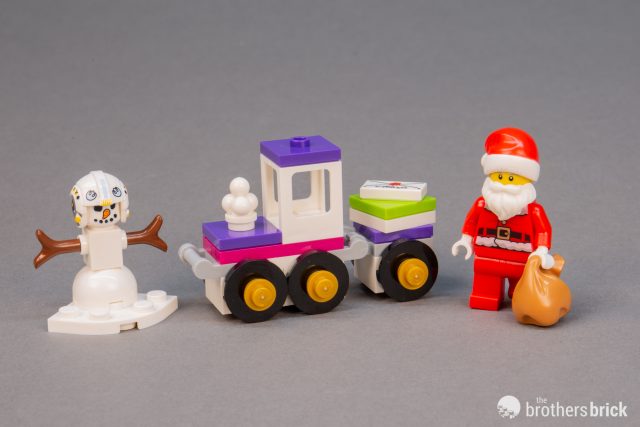 Dave: For the first time in LEGO history, we finally have a printed snowman face! I can’t wait to get a top hat on him instead of that helmet. The Friends train leaves a lot to be desired for a build with 40 pieces. I can’t help but feel the last advent day should be more festive… maybe the presents from Day 21 would have been a better choice. And some kind of Santa minifigure has wrapped up the City advent every year since 2009. While I have a few too many Santa minifigures myself, I think for a kid opening the calendar for the first time, getting Santa is a no-brainer. At least this one has the torso with a hidden candy cane tucked in his belt behind him.

Andrew: Merry Christmas! While all the kids are enjoying the arrival of Santa Claus, I’m over the moon (“That’s no moon…”) about General Merrick’s flight helmet.

Chris: The snowman-ified Rebel helmet is fun, if only to give more variation to your Rebel crew. Moving on, the train is OK, though I think there’s got to be a better way to do wheels. Maybe try using… wheels. Finally, Santa! Yay, Santa! He may not be novel, but he’s classic.

Edwinder: I think the Star Wars snowman was designed to scare children. I also think it would be fun to add a single yellow stud right next to the snowman. (I’ll leave it to your imagination to decide what that means.) Moving on, I cannot process that oddly colored train. And Santa finally makes an appearance!

Rod: The train would be almost okay if it had a funnel! Without it all the steam and smoke is going to blow straight into the cab!

Luka: Santa is a staple in City calendars, but for those of us who get it every year, he is getting repetitive. I could make a Santa army! The Friends train has a lot of great pieces but I have to admit is a disappointment for the final day of the advent. And the Star Wars snowman is great, although he isn’t as exciting as some of the previous years’ final presents like Darth Santa or Santa Yoda. I can’t wait to see builders using the snowman face as an alien race in space-themed creations though! 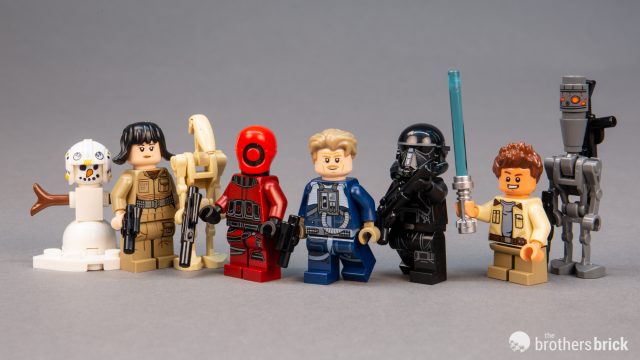 Dave: LEGO really reached across the Star Wars cannon in this year’s advent, and the variety in aggregate is frankly refreshing. (Now go and watch the Freemaker Adventures! Trust me, you will enjoy it!)

Andrew: LEGO Star Wars advent calendars always seem to be a mix of both truly fantastic, unique minifigs and filler. This year’s filler are the two droids, which are incredibly common. The inclusion of General Merrick with his flight helmet is definitely the highlight for me.

Edwinder: Star Wars Advent calendars are “fig-bait” sets for me, so I tend to wait and get them on discount after the holidays. Though LEGO, I’m still waiting for that specially printed holiday red-themed R2-D2, ya hear?

Chris: Looked at as a complete group, the minifig haul is better than I would have guessed, actually. 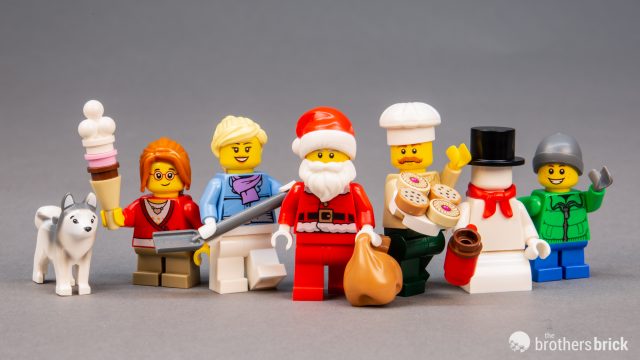 Dave: The City advent minifigures this year are right at home for the holidays. Without any seasonal vignettes available from LEGO this year in favor of BrickHeadz, I think the minifigures are a great addition to any Winter Village.

Andrew: Although the torso designs are a little overused, this is a great selection of LEGO City minifigs. Santa Claus in particular is excellent.

Edwinder: I <3 huskies! And you can’t ever have too many Santa minifigs in your collection.

Chris: These guys would look right at home in any Winter Village scene. That said, I also don’t see anything here that would make me go out of my way to get this set. 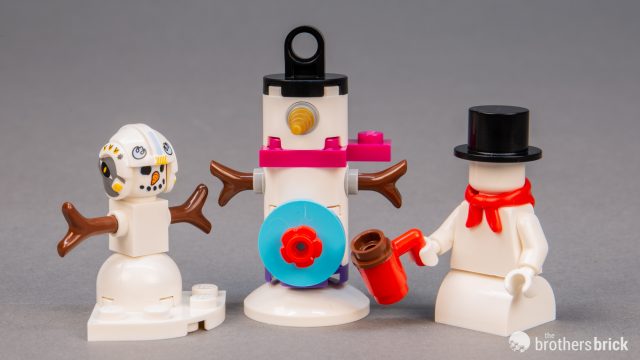 Andrew: In a single photo, here’s a great summary of the contrasts among this year’s advent calendars. The LEGO Star Wars snowman includes two unique printed parts (highlighting a reason for the higher price point of that set). I can’t help be a bit afraid of the LEGO City snowman with a blank face and a base that looks like it’s going to float creepily toward me. But I just have to shake my head at the LEGO Friends snowman, with its disproportionate, blocky shape and inexplicable round piece near the bottom.

Chris: I really wish LEGO had a better way to do snowmen. I don’t think I’ve ever been truly satisfied with one. Maybe eventually when they use an un-printed round BB-8 piece for a snowman, it will look OK.

Edwinder: LEGO, you’re reading this, I know you are. I’ll tell you a secret. If you make a proper snowman minifigure of sorts, you will see the internet break in happiness. Headlines everywhere! One can only hope. 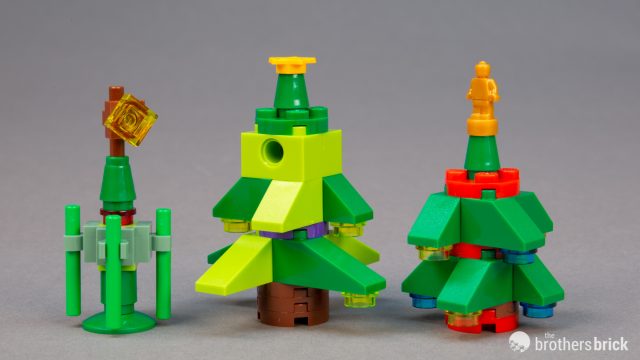 Dave: While the vaporator tree is awesome, I have to say that the City tree looks the best with a consistent color scheme, well chosen lights and a perfect tree-topper.

Andrew: LEGO Star Wars wins the Christmas tree wars as well this year with a fantastically original re-purposing of the moisture vaporators seen on Tatooine, Jakku, Lah’mu, and elsewhere. But for the more realistically minded builder, the LEGO City tree has a lovely shape with a great tree-topper. The horizontally affixed star on the LEGO Friends tree is just baffling.

Bre: I agree that the “star” on the top of the Friends tree is odd, but I love what they did with the gold microfigure atop the City tree. Unfortunately I know very little about some of the Star Wars stuff, so the Star Wars tree just looks weird to me.

Edwinder: Thank you Andrew for spotting that horizontally affixed star. I knew it wasn’t just me going crazy. I’m not sure why Oscar is perched on a tree this Christmas, but I’m awarding 100 points for creativity to Master Jedi Luke — the Tree Decorator. 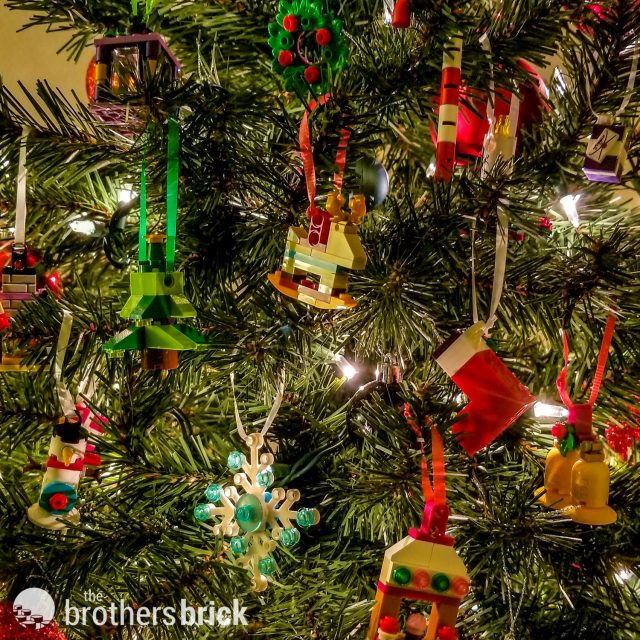 Dave: It wouldn’t be fair to not showcase the Friends advent calendar builds as they were intended, hung on a Christmas tree in all their festive glory. While we have analyzed them in close comparison against the City and Star Wars advent builds, I think you can see for yourself that the ornaments work best as a collective whole. The 2018 LEGO Friends Advent Calendar took a real risk this year not offering minifigure-sized simplistic builds with mini-dolls or animals. The result was providing more challenging builds, a higher part count, more interesting elements, and an overall consistent holiday vision that I personally enjoyed immensely.

Well, there you have it everyone, our 2018 LEGO Advent Calendar countdown has come to a close. We hope you’ve had as much fun with our side-by-side comparisons as we did making them for you. Join us again next year for more advent calendar fun, but until then have yourselves a very merry Christmas and a happy New Year from all of us at The Brothers Brick!