Welcome to Day 23 of our LEGO Advent Calendar countdown. Each day, we’ll reveal the three mini-builds from the LEGO Star Wars, LEGO Friends, and LEGO City 2018 advent calendars along with commentary from The Brothers Brick team. 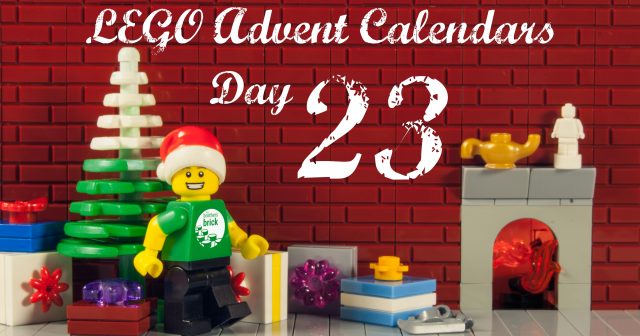 For Day 23, we have a Antoc Merrick from Star Wars, a Christmas tree ornament from Friends, and helicopter from City. 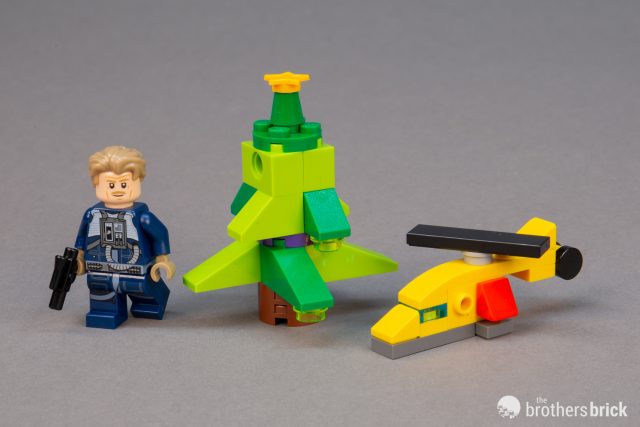 Dave: Who is this Star Wars guy? All I know is that his face and dark tan wavy hair are brand new and exclusive to this advent. The blue jumpsuit was in a few sets like the 75172 Y-Wing and 75155 U-Wing. The Friends Christmas tree looks a bit too all over the place for me and ends up looking like a table scrap. Needs an edit. But that City Helicopter is fantastic! It most certainly is a spot-on mini version of 60179 Ambulance Helicopter.

Andrew: It was pretty disappointing that none of the original waves of Rogue One sets included General Merrick, the leader of Blue Squadron and one of my favorite new Rebellion officers. (“Wait, there’s no blue squadron at the Battle of Yavin. Ohhh…”) So, it’s great to finally get Antoc Merrick, even though the only really unique thing here is his face. At least it is double sided. It is a shame they didn’t include his helmet though.

Chris: I have to say, I’m not feeling that tree. To be honest, I think it looks terrible. That tiny chopper is pretty great, though.

Nick: Not really digging multiple shades of green on the tree. I think it would look better in one shade.

Edwinder: As much as I am a Star Wars fan, every time I hear Chris or Andrew mention a character I never remembered or noticed, I just crawl back into my cave and play Transformers G1 reruns. I know they literally wrote the book on LEGO Star Wars, but geez! That said, I LOVE the blue jumpsuit. I’ve had enough of the orange ones. I’m not too keen on the tree, because the star on top is flat! When was the last time you saw a star positioned on a Christmas tree that way? I can hear Santa screaming about it at the top of his lungs all the way from the North Pole. I do like the City helicopter–it is simple and it works well.

Rod: The helicopter is sweet–sleek and fast-looking. The Star Wars figure is nice to get pilot suit in blue as Ed and Andrew said. But that tree is just awful. It looks like those sad trees you see in the garbage in January. The lime green makes it look like half the tree is already dying off. And they could have at least have used another green 2×2 round plate in the middle rather than a purple one?!

Luka: Lime green and regular green look bad together in 99% of cases, and this tree is one of them. The design of the tree is decent and it will make for a sturdy ornament, but why make it lime colored? Even worse, the translucent neon green 1×1 round stud “lights” are hardly visible. At least the Star Wars minifig is good and the helicopter has a nice design while sneaking in some nice parts, notably that translucent light blue plate.