Welcome to Day 19 of our LEGO Advent Calendar countdown. Each day, we’ll reveal the three mini-builds from the LEGO Star Wars, LEGO Friends, and LEGO City 2018 advent calendars along with commentary from The Brothers Brick team. 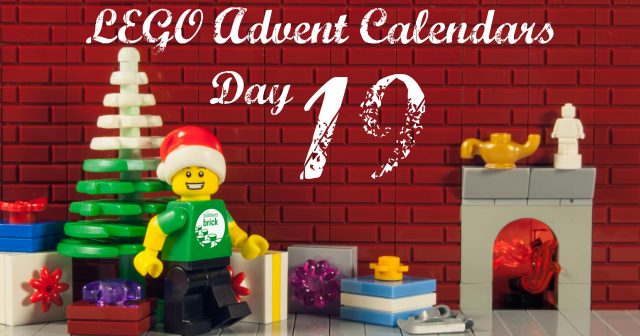 For Day 19, we have an AT-ACT from Star Wars, a gingerbread man ornament from Friends, and pair of remote-controlled cars from City. 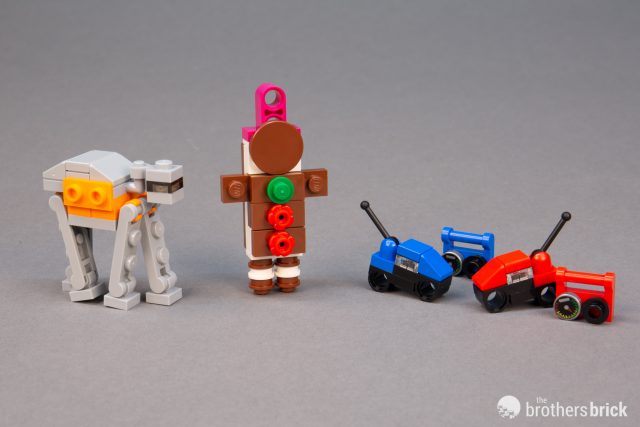 Dave: I like the fact that the Star Wars advent has featured builds from almost every film and TV show. Variety is the spice of life! The gingerbread man from Friends looks oddly static and with no facial features, and the blank face is a little unnerving. I quite prefer the little gingerbread house from last year’s City advent. The cars from City are tiny, yet feel substantial. Kudos to LEGO for providing two of them!

Edwinder: Finally we get to see some decent builds. The AT-ACT looks like a re-colored version of the AT-AT from the 2015 advent. I love the tiny remote controlled cars. And I don’t know if a gingerbread man in this size has been done before, but its a decent attempt.

Andrew:  While I agree with Edwinder about the great AT-ACT from Rogue One and the fun little RC cars, all I can see when I look at the gingerbread man is a gingerbread crucifix. “Take, eat: this is my body, which is broken for you.”

Matt: My mouth is watering, because a gingerbread crucifix sounds like it would taste heavenly. Less so with RC cars and an AT-ACT. If I wanted to chew through wires, I’d go for a bowl of spaghetti… or maybe macaroni bricks.

Chris: That little AT-ACT is great, even if it does suffer from the common affliction that befalls tiny Imperial walkers: not having knees. And the RC cars design gets a lot better when you think of them as TRON racers rather than realistic car models. But ya… that Gingerbread man is just creepy. Anyone got some pins?

Edwinder: Interesting indeed, after seeing what Andrew noted (a crucifix) and Chris perceives (a voodoo doll) — I can’t un-see either of them!

Rod: I love the RC cars. They’re awesome, although a it is a little odd the controls don’t also feature aerials.

Luka: That gingerbread Friends build really puts Christ back into Christmas! The town build wins from the playability perspective today. While the parts from the other two probably come in handy more often to builders, the cars will look the best if you display all the gifts from the calendar together. 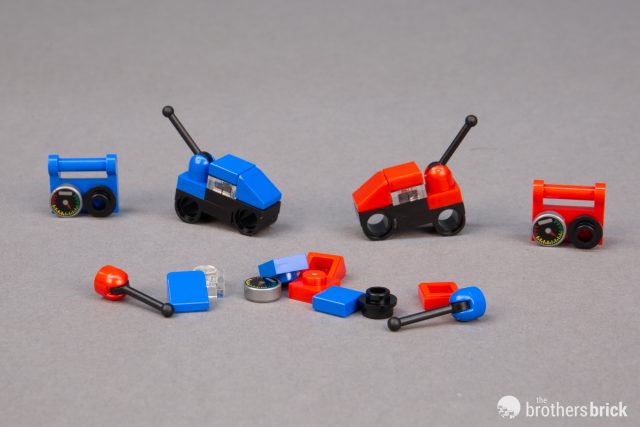 Dave: The remote controlled cars are built out of 20 pieces–and so many of them are small we got 11 extra. You could nearly build an extra car or two with all the extra pieces!

Andrew: I’m always amused by Advent Calendar mini-builds that have nearly as many extra parts as the builds themselves.

Edwinder: I like it when I get spare parts, especially these 1×1 elements. Did someone mis-calculate the extras? I usually get tense seeing a high part count for extras — it usually means I missed something. I start to flip through my instruction booklet, dreading to discover which crevice they come from that I missed. Thank goodness these are Advent Calendars where we can’t go wrong.

Luka: Here is a challenge for everyone. With all these extra parts, what can you build out of the City day 19 gift?