Welcome to Day 20 of our LEGO Advent Calendar countdown. Each day, we’ll reveal the three mini-builds from the LEGO Star Wars, LEGO Friends, and LEGO City 2018 advent calendars along with commentary from The Brothers Brick team. 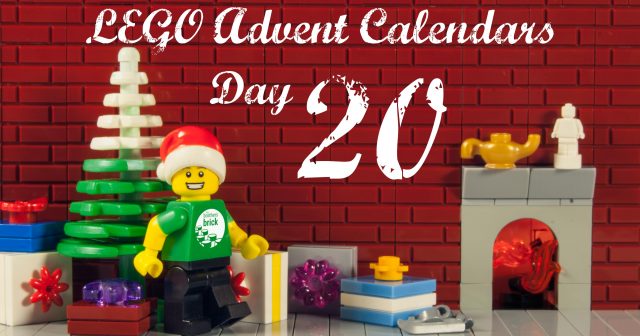 For Day 20, we have a Cargo Shuttle from Star Wars, a snowflake ornament from Friends, and digging vehicle from City. 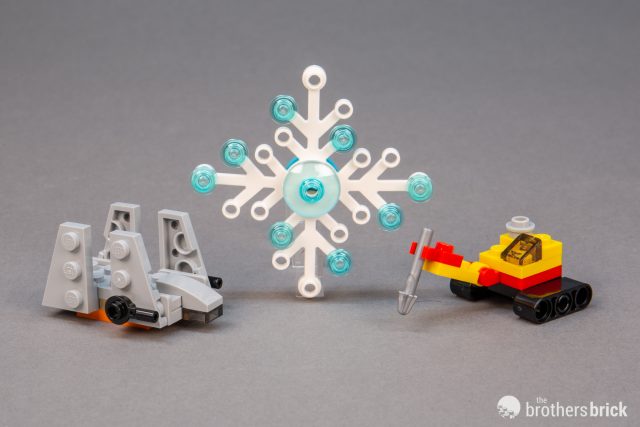 Dave: I am surprised LEGO has never made a minifigure-scale set of that Star Wars shuttle, though many talented builders have built their own renditions. I absolutely adore the Friends ornament. It is beautiful in its serene simplicity, and up until recently those white leaves were very rare, only coming in 10254 Winter Village Train and some Frozen sets. The digger follows the recent color pallet of the City mining sets, leading me to believe it is a mini-60185 Mining Power Splitter.

Andrew: Another great rendition of a vehicle from Rogue One. The Friends ornament is perhaps a little simplistic, but still works rather well. For once, I’m not convinced by the City mini-build. Is that supposed to be a digger?

Nick: A few months back, I was messing with white LEGO leaves and one configuration looked like a pretty good snowflake. Awesome seeing an official set designer had the same idea.

Chris: The Imperial Zeta-class shuttle is a solid design, though I think the slope above the cockpit should be a flat tile instead (or even better, a gold bar), and the whole thing would look better in dark grey instead of light grey. The snowflake is definitely simple, but I think it really works. It’s the first one of these ornaments I can see actually putting on my tree. And the driller is great, it looks like it could be the excavator from 61024 Volcano Explorer Base too.

Edwinder: I’ve got to agree with Chris on the flat tile vs. slope. On a normal day, we get to call shoddy builds “table scraps.” Today, because Christmas is coming, Imma’ gonna let that slide. Something about that snowflake doesn’t feel right. I think a single snowflake does not do it. I would love a bunch of these all together on a tree–that’d be right. Regarding the tractor thing, I like the build but the harpoon just seems out of place.

Rod: I really like the digger. I’m less convinced by the Star Wars shuttle (only because it wasn’t a ship that particularly caught my imagination in Rouge One).

Luka: From a builder’s standpoint these are all great little gifts, but to a kid or a set collector and builder, the Friends and City builds are quite lackluster.