Progress on my Pave Low helicopter has been slow. In Part 1 of this series, I explained how I am using new parts and techniques to build an up-to-date version of the model I built ten years ago. In this second part of a short series, I’ll explain one of the difficulties I ran into. I plan my models such that actually building them is usually a fairly straightforward process. I used my old model as a template and had an idea of how to do most of the other things in my head. As a result much of the model so far indeed came together quite easily. 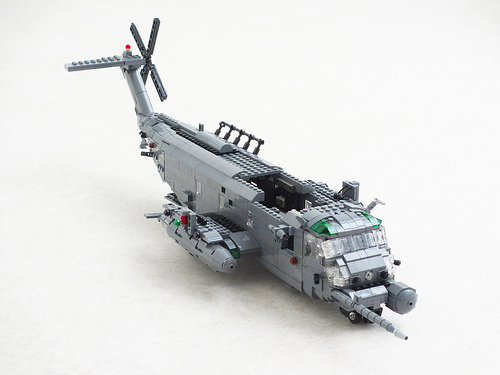 Note the words “usually”, “most” and “much” in those last three sentences. The tail on my old model was quite narrow and I wanted the new one to be wider, using curved slopes and bricks. However, the fin is tilted aft at a roughly 45 degree angle, with a horizontal fin on top of it. I only had a loose idea of how to this. Actually building it took about eight frustrating hours of tinkering and trial-and-error. The diagonal part is attached to the tail boom using clips and plates with bars. The horizontal fin uses a similar attachment. A major problem was positioning all of this at the proper angle. I wanted as few visible gaps as possible and the tail should also be reasonably sturdy. This was asking rather a lot. The result is an improvement over the old one, but I’m still not completely happy. 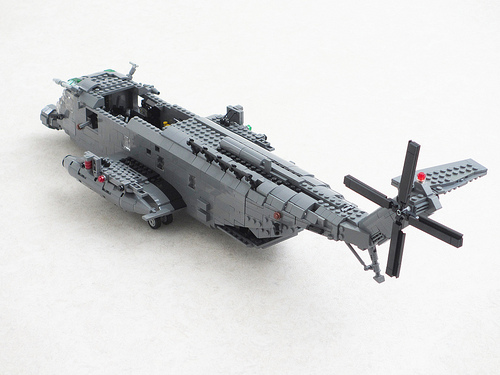 It’s ridiculously complicated. Ten years ago I didn’t have this problem. I had few options other than building the tail studs up, using slopes, which is exactly what I did. Now, you could argue that I feel things were easier ten years ago because I’m old-school (or just plain old). Various new brackets and bricks with studs on their side have made building things sideways (a.k.a. Studs Not on Top or SNOT) easier. Certainly compared to how things used to be, back when the headlight brick was one of the very few options to do it. However, for a long time I didn’t really need an awful lot of SNOT techniques to build decent helicopters, as the top row of models (from 8-10 years ago) shows.

The bottom row shows the new versions of these models, which I built last year. These use more SNOT techniques and curved slopes. I think they are more realistic and prettier, but they are also vastly more complicated. They take about twice as long to build as the old ones.

The Pave Low is no different, although the hardest parts are now behind me. The construction of the tailboom still needs a little fine-tuning. Then I’ll turn my attention to the stuff on top, such as the engines and gear box housing. I don’t expect major issues there, so the next part of this series will likely be the last.

5 comments on “How to build a Pave Low helicopter with LEGO: Part 2 [Feature]”