A few months ago, I wrote three articles on how I built the E-1 Tracer aircraft model. I haven’t built much in the intervening months, but recently I have started on a new project: an MH-53M Pave Low helicopter. This is a somewhat different cup of tea. It’s not a fixed-wing aircraft and I am not starting from scratch. Instead, I am starting with an old model that I built ten years ago. 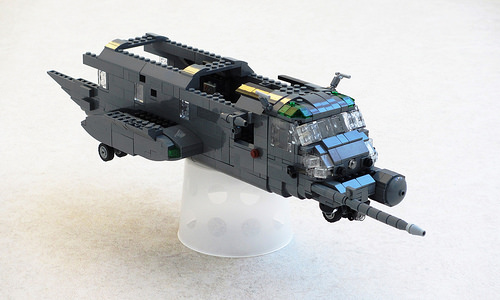 This means that there is a lot less planning involved. The proportions of the old model were pretty much spot-on, but there are many parts and techniques that didn’t exist or weren’t possible ten years ago. As a result, the old model looked, well, old. 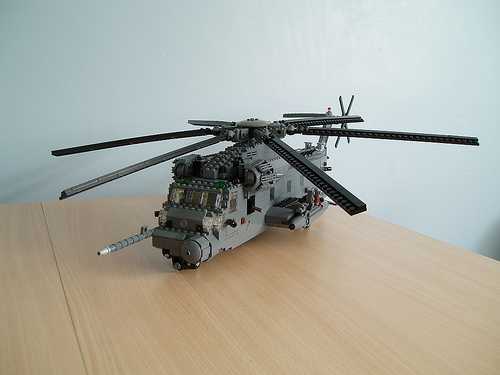 In this and subsequent articles, I’ll go into how I am building this new version and how newer parts and techniques change how I approach the design.

Until their retirement in 2008, Pave Low helicopters were used for rescuing downed aircrew and for special operations. This involved flying far behind enemy lines. The helicopters had a lot of equipment to enable them do this, such as terrain following radar mounted in a thimble-shaped housing at the front, and a wide array of warning and jamming equipment to protect them from enemy air defences. The helicopters could also be refueled in mid-air from Hercules tanker aircraft, using the helicopter’s long nose-mounted probe. These features all add to the machines’ menacing look and made this an attractive choice for a model. 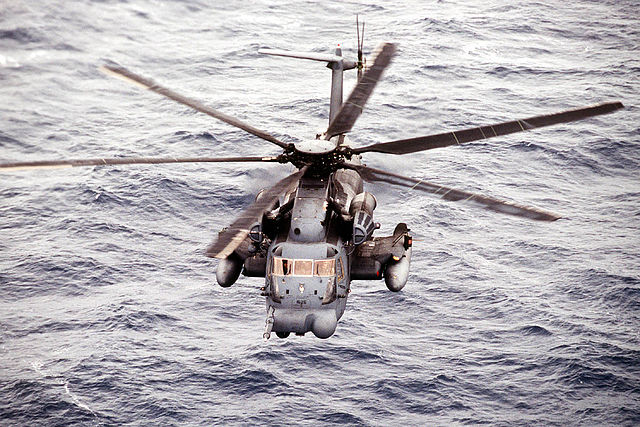 Back in 2008, I built the fuselage as a fairly simple box, with nearly flat bottom and top surfaces. The fuselage corners were slightly rounded using stepped plates. Looking at the real helicopter, however, it is clear that they should be a lot rounder. So, on my new model, I am building the bottom studs-down, with curved slopes forming the bottom corners. Those parts existed back when I built the original, but I certainly didn’t have them in large numbers. I am rounding the top corners using a combination of 45-degree slopes and 1×2 and 2×2 curved slopes. The curved slopes weren’t around ten years ago. The new cockpit section looks a lot better thanks to slightly tapering sides and curved slopes, and cheese slopes give it a much rounder shape. 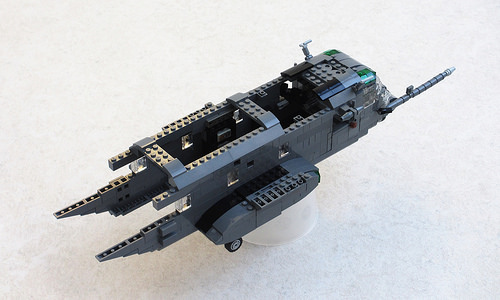 The Pave Low has a retractable undercarriage, with the main units retracting into sponsons on either side of the fuselage. These sponsons have an airfoil shape when seen from the side, which I recreated using curved slopes. I built the pointy aft end using two inverted slopes mounted studs-up and two regular curved slopes mounted inverted. This allowed me to build the trailing edge with 1×2 cheese slopes. It is all much smoother than it was on my old version.

There’s an irony in having all of these new parts, though. You might think that they make building aircraft or helicopters a lot easier. However, I find that they actually make it harder, because now that they exist, there really is no excuse for not using them. Getting everything to fit in place, though, means that the model becomes a lot more complicated, with bits pointing in many different directions. A simple box won’t do! My next steps will be building the tapering aft fuselage, the tail boom and then the engines.

8 comments on “How to build a Pave Low helicopter with LEGO: Part 1 [Feature]”