LEGO castle scenes are generally static pieces of landscape with some kinds of structures or a little sprinkle of life in the form of a handful of minifigs. This is a tested formula that works best in most examples, but the latest scene by h2brick is not one of them. The builder faithfully recreates a piece of the battle of Minas Tirith from the third Lord of the Rings movie. 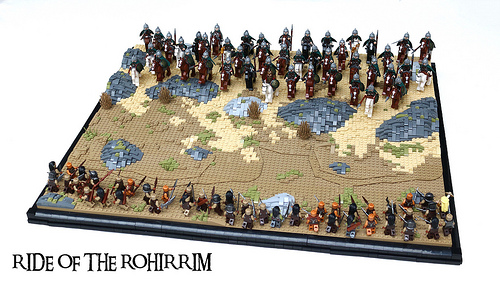 The landscaping is nice to look at with flowing layers and colours, as well as some well built yet subtle rocks. One would expect the LEGO horse to start feeling repetitive, but the variation between colours, mold types and posing keeps it fresh. The touches of clutter on both sides give a feeling of an anxious anticipation of battle.