In the online LEGO fan community, Mattila Heikki is well known for his realistic miniland-scale interior designs. While his recent creation is technically still an interior design, it is markedly different from his usual style. Mattila has built in classic styles before, but we’ve never seen a creepy haunted house before. 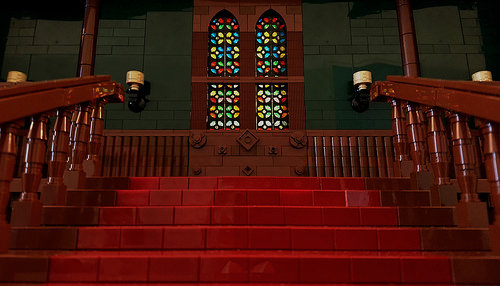 Mattila’s latest scene is all about perspective, achieved by the stairway and its railing–what would often be a small part of a scene, but is frame to take up nearly half the picture here. The lights on the wall give a sense of the hallway continuing on to the left and right for an unsettlingly long time and the colours set a moody and mysterious tone. If you’re staying here and have to use the toilet at night, it might be a better idea to wait until morning.