“It was a large and beautiful circular room, full of funny little noises. A number of curious silver instruments stood on spindle-legged tables, whirring and emitting little puffs of smoke.” That’s how J. K. Rowling’s described Dumbledore’s cluttered office, and it’s the sort of evocative prose that gets the LEGO builder’s creative juices flowing. Jonas Kramm certainly seems inspired, creating this amazing model for TBB’s Microscale Magic contest. It’s a detail-perfect build: there’s the sorting hat on its shelf, and there’s a tellurium that cleverly utilises a microphone element, and over here a magnificent orb represented by a Bionicle Zamor. The crowning accomplishment has to be Fawkes the Phoenix, whose feathers are inspirationally shaped from plume and mechanical claw pieces to great effect. 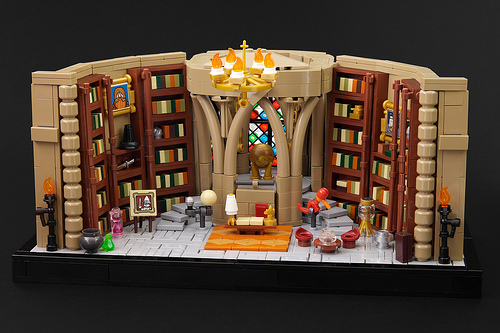