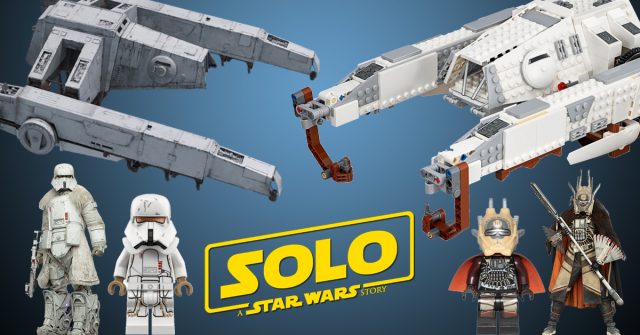 As we’ve noted in our reviews over the last few days, all three of the new LEGO Star Wars sets from Solo: A Star Wars Story feature vehicles and characters from the train heist scene in the first half of the movie, in which Tobias Beckett’s gang uses an Imperial AT-Hauler to try stealing coaxium hypermatter fuel from an Imperial Conveyex Transport on the planet of Vandor. During their attempted robbery, they face Imperial range troopers guarding the train as well as Enfys Nest’s Cloud-Riders on swoop bikes. 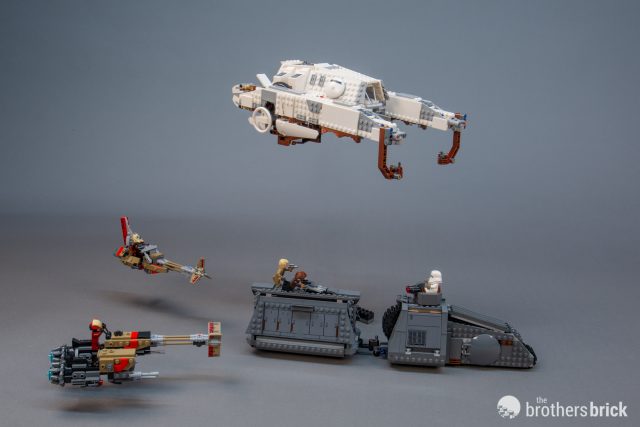 The cast of characters

We noted in our original comparison review that the first wave of LEGO Star Wars sets from Solo left sizable gaps in the range of vehicles and minifigs. Across the three new sets, this second wave fills many of the gaps we noted, including all of Tobias Beckett’s gang in their Vandor gear — Beckett, Val, Rio, Han, and Chewie. All five new minifigs are excellent, with a new printed piece for Chewie and a completely new mold for Rio’s arms. 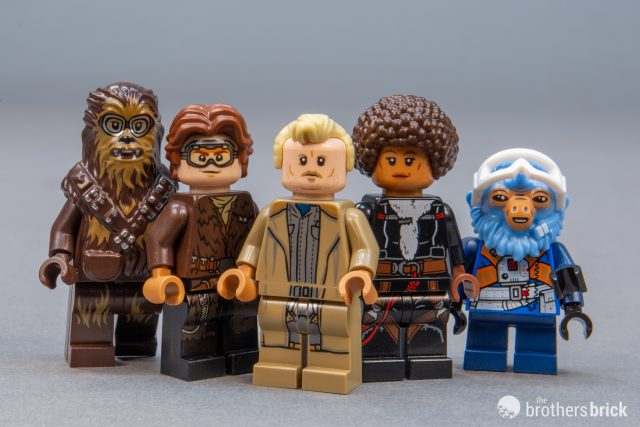 The new sets also add several key Galactic Empire characters — in particular the much-anticipated range troopers. The range troopers could have been bulkier with the addition of kama waist armor like that worn by Clone Troopers and Imperial snowtroopers, and their enormous boots could have been replicated with the simple addition of 1×1 plates, but they’re excellent minifigures nevertheless. 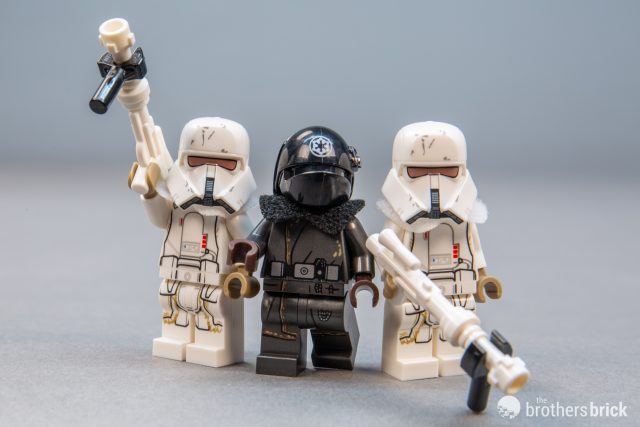 I was personally most excited about Enfys Nest — an utterly intriguing, totally badass character who deserves much more character development in the future. Enfys Nest is accompanied by Weazel, a reformed thief who first appeared in Episode I. However, it was terribly disappointing that neither character had faces under their masks or helmets. 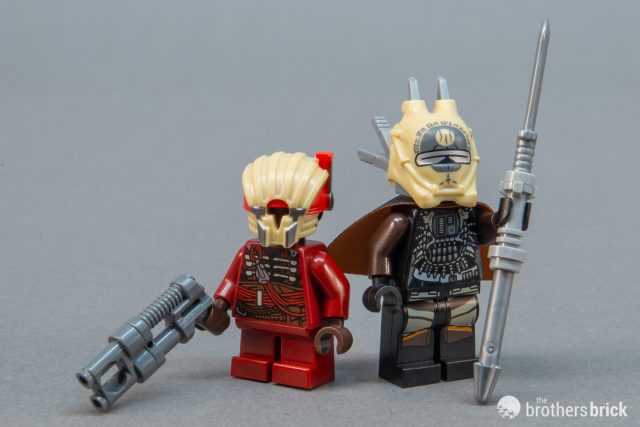 Each of the three LEGO sets includes one or more of the vehicles featured in the train heist scene. 75217 Imperial Conveyex Transport includes the train, 75219 Imperial AT-Hauler gives Tobias’s gang their ride, and Enfys Nest and her marauders fly in on 75215 Cloud-Rider Swoop Bikes. 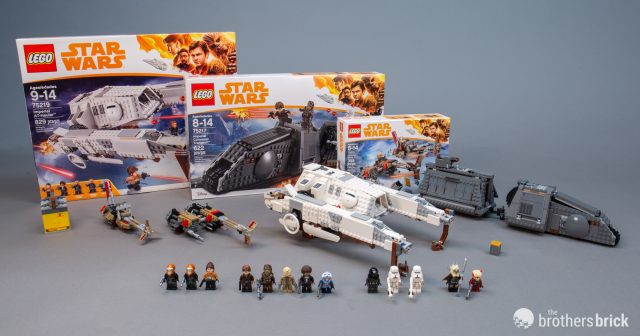 Even though the “hero vehicle” for their gang is the Kuat Drive Yards Y-45 armored transport hauler (aka “AT-Hauler”), Tobias’s gang is spread across all three sets, with Tobias in 75215, Han & Chewie in 75217, and Val & Rio in 75219. Here they are together with their stolen vehicle. 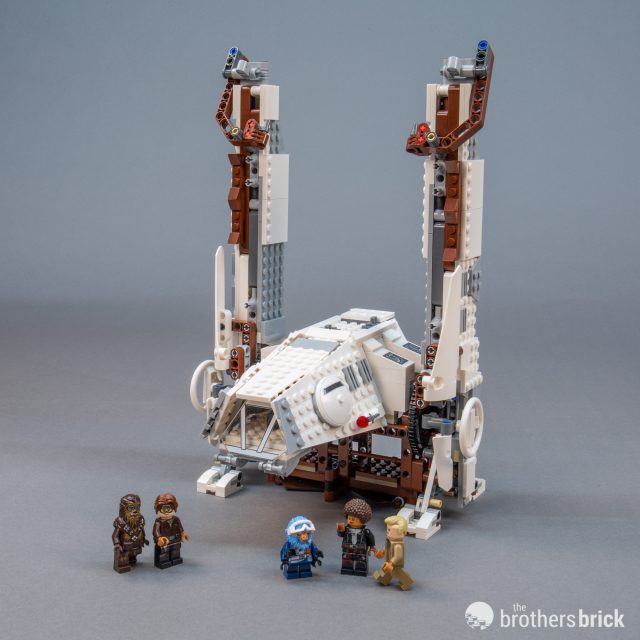 We noted in our review of the train that the set includes just one of the two “over/under” drive engines featured on the “real” KDY ATD-C45 conveyex engine, along with just one of the intermodal cargo carriages. It would be interesting to see what several of the same set together might look like, with a custom-built track, but given the poor performance of the movie itself, it’s doubtful that LEGO builders will take the time to do an epic train scene at some upcoming LEGO convention. 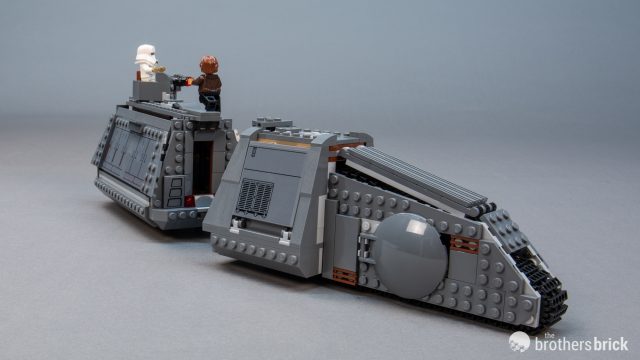 Swoop bikes are generally larger than speeder bikes, but the two swoops in the Cloud-Riders set — Enfys’ Caelli-Merced Skyblade-330 and Weazel’s Arrogantus-X Skyblade-221 — are still overly large, with their riders almost disappearing into their bikes. 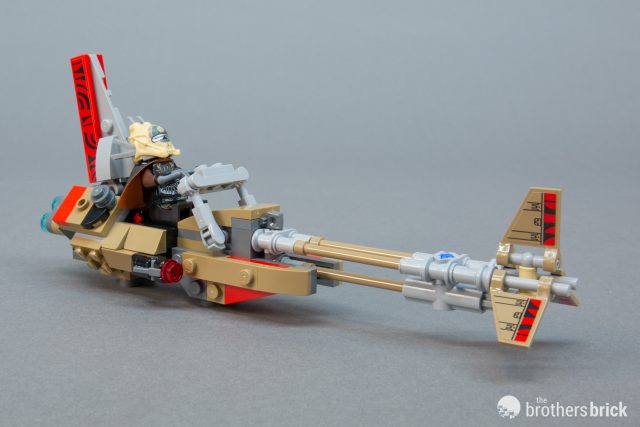 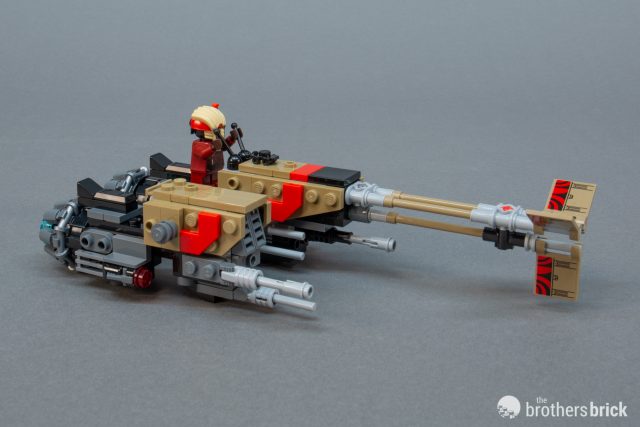 How the three LEGO Star Wars Solo sets fit together

LEGO sets based on a movie do often depict vehicles that interact with each other in various scenes — the X-wing and TIE Fighter are an obvious example of this kind of “good/bad” pairing, even though the minifigs and packaging indicate they’re from totally separate movies. But it’s unusual to have three LEGO sets released at once that are all from a single, distinct scene in one movie.

Beyond complementary minifigure selections, two of the three sets are actually designed to work together. Specifically, the instruction booklet for the AT-Hauler shows that it’s designed to be able to pick up the conveyex transport’s cargo container. The white Technic wheels on each arm of the AT-Hauler don’t serve any purpose for rotating the arms up and down. Instead, they connect via a long Technic axle to the front of the arms, where they open and close the lifting hooks. 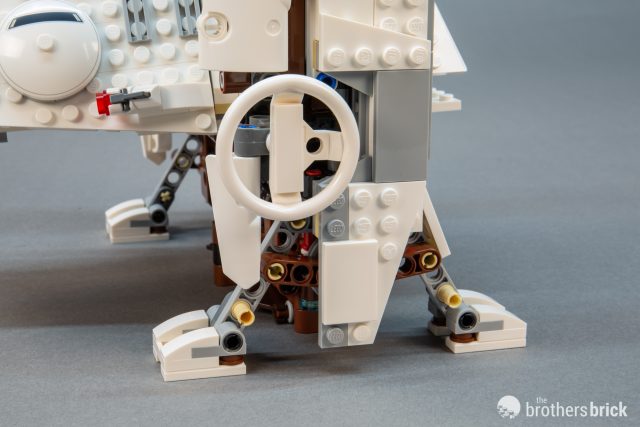 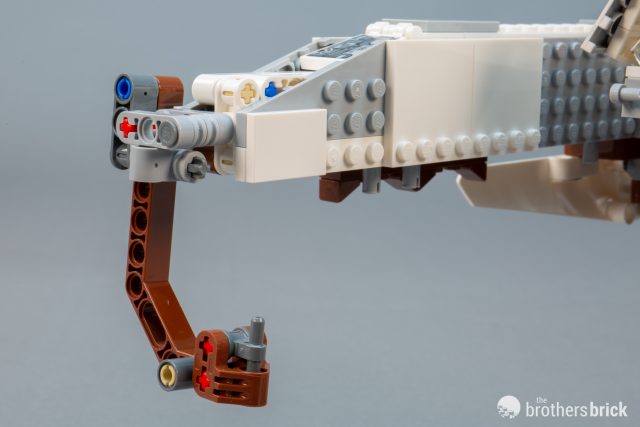 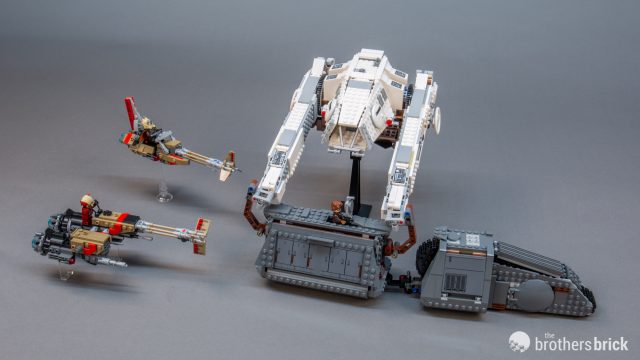 As we mentioned in our review of the train, the cargo carriage has open slots on either end. The AT-Hauler’s lift hooks fit into these openings, and the hauler’s Technic frame is sturdy enough to carry the weight of the container. 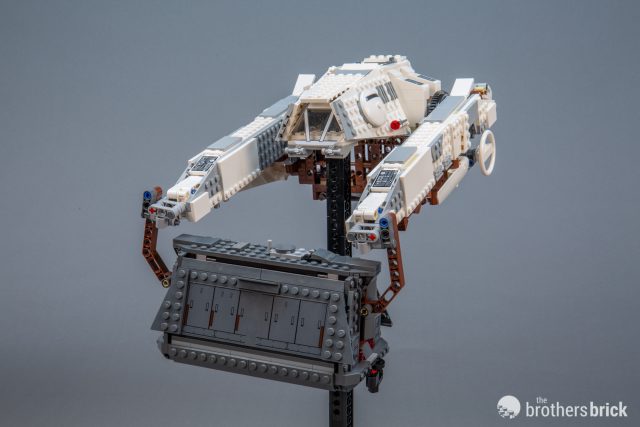 The arms of the AT-Hauler do strain a little bit under the weight of the train’s cargo carriage, and you have to be fairly careful about how you pick up the AT-Hauler to swoosh it around with the dangling cargo container — hold the AT-Hauler at the back, rather than from the cockpit (which is a fragile skin that isn’t load-bearing). 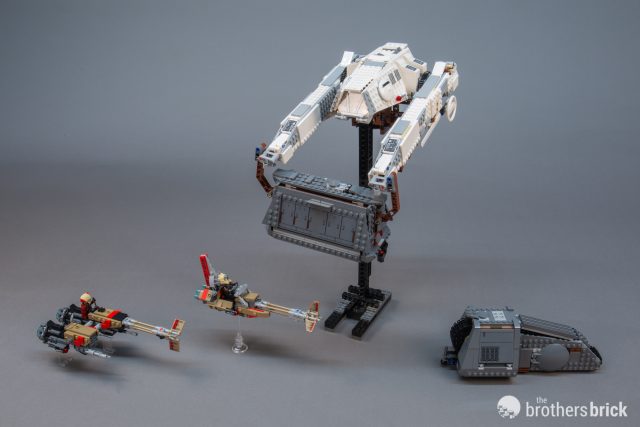 When combined like this, some of the minor shortcomings of the individual sets become less relevant, and it’s quite fun to role play with the nearly complete cast of characters (more of the Cloud-Riders would have been perfect). Of course, Tobias’s crew uses cables to try to lift the cargo carriage rather than lifting it from the side like the LEGO set does, since the train was underway at the time, but complicating both builds with a bunch of cables that would immediately get tangled would have been a poor design choice. 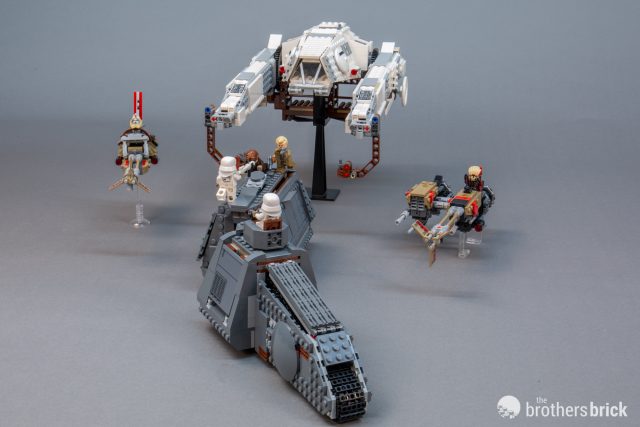 We asked this question back in May in our first comparison review, and it’s nice to see that many of our guesses and wishes have come to pass with the release of this second wave of LEGO Star Wars sets from Solo.

The most disappointing gap still left for me is the absence of L3-37. What’s still missing for you?

You can support reviews like this one by purchasing your copy of these LEGO Star Wars sets from any of the following links:

And don’t miss our earlier reviews of the first wave of LEGO Star Wars sets from Solo: 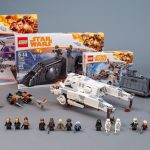 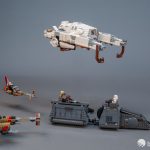 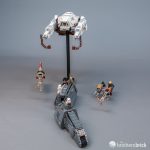 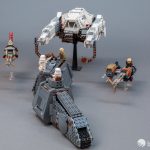 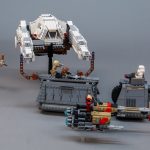 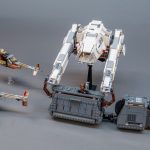 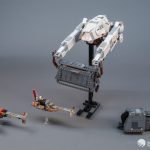 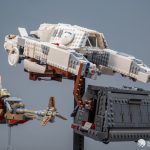 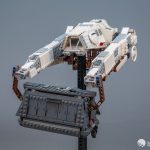 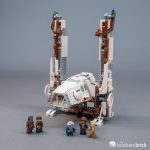 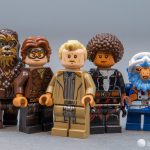