Mesoamerican temples lend themselves naturally to LEGO, with their blocky shapes and colours that are often abundant in collections, namely grays and greens. There seems to be an influx of Mayan and Aztec temples lately as you might have noticed on The Brothers Brick, and we have the Summer Joust competition to thank for this. One of the creations built for this contest is this one by Andreas Lenander 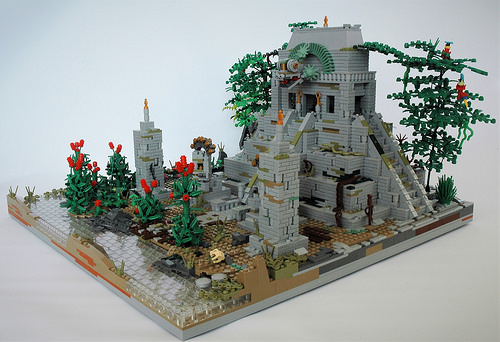 The first thing that catches our attention is the dark tan ground, a change from the expected greens that are used in similar creations. While I like the contrast that green gives, tan is probably more realistic. The sand and olive green overgrowth on the temple is an interesting colour choice, joined by dark green, which looks almost black in the photo. This darker colour gives a strong impression of wet moss, setting the scene in a particularly dank swamp. Some of the more unique parts usages include the Statue of Liberty headgear used as serpent’s head ornaments and the brown treads used as vines.