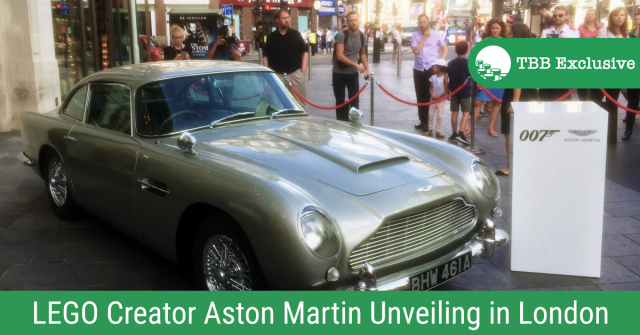 As soon as we slipped past the building queue of patient fans, it was clear James Bond memorabilia had replaced LEGO sets in the display cabinets. The displays included scaled DB5 models from Skyfall, a pair of Q’s glasses, James Bond’s driving licence and some original sketches showing the design of the DB5’s ejector seat mechanism from Goldfinger. 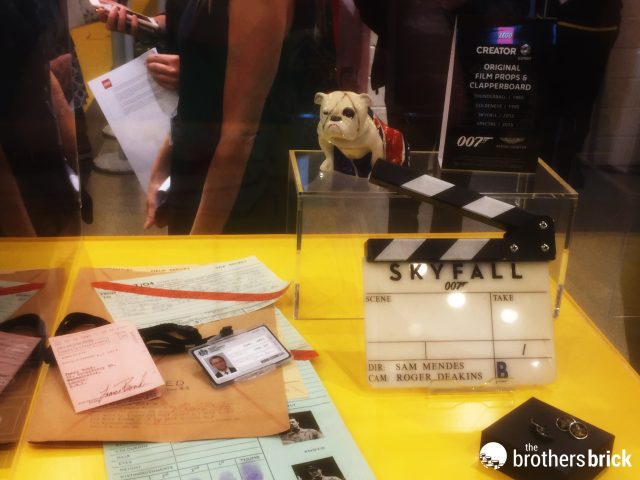 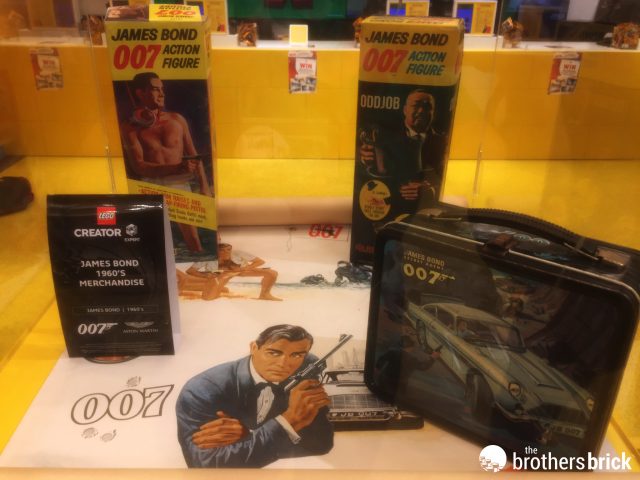 The shelves of the ground floor central displays were filled with the latest James Bond DB5 set for the fans queuing outside. Senior LEGO Designer Mike Psiaki, and Aston Martin Creative Director of Exterior Design, Miles Nurnberger were on hand to show off the results of their partnership. 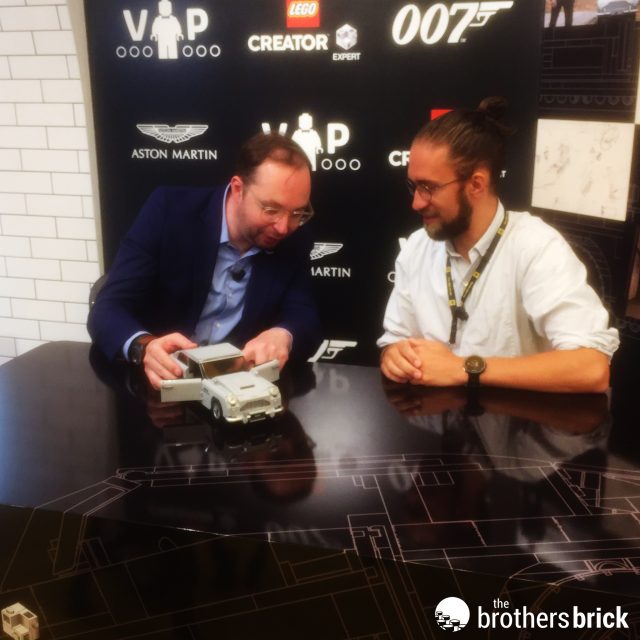 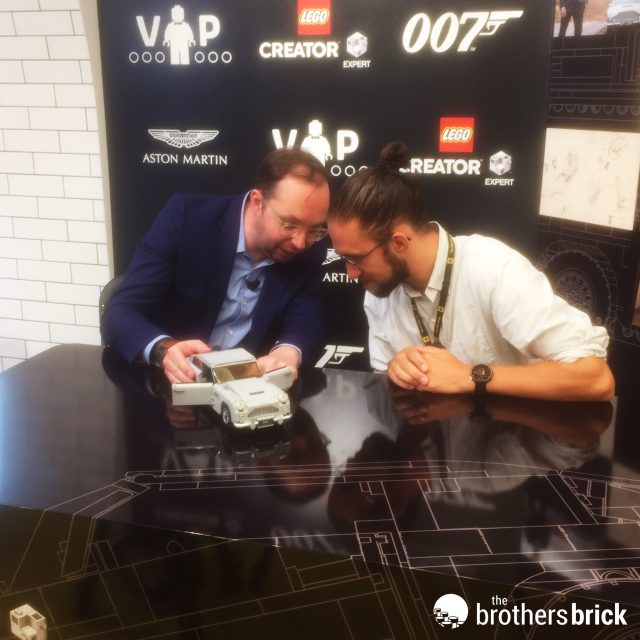 Mike Psiaki is well known for his talents in the Creator Expert range with sets like 10252 Volkswagen Beetle, 10260 Downtown Diner and the 10257 Carousel, under his belt. It may surprise you learn that this model has a lot of integrated Technic to control some of the play features, and this is also Mike’s creative work along with the exterior design using System bricks. Creative Director for the Creator Expert theme, Jamie Berard, was present in the store and reminded us that Mike’s original training was as an engineer, in fact, he has a Mechanical Engineering degree from Cornell University. 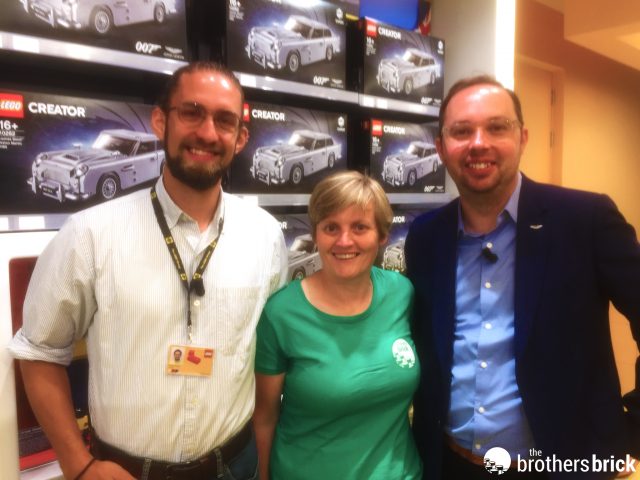 Miss Moneypenny is secretary to M, James Bond’s boss and head of the British Intelligence Service. The latest incarnation of Miss Moneypenny is played by British actress Naomie Harris and she deftly removed the LEGO DB5 from a sealed case held by a LEGO henchman keeping a careful watch over his precious cargo. Unfortunately, most of the queue was around the far side of the LEGO Store and were not able to see their first glimpse of the set until they entered the store. Inside they could purchase the set for £129.99 and receive the exclusive Licence to Build driver’s licence and have their set signed by Mike Pisaiki and Miles Nurnberger. 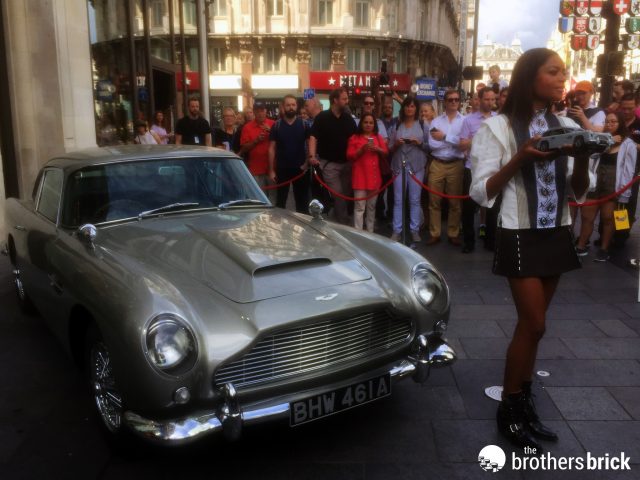 We were able to have a chat with both Senior LEGO designer Mike Psiaki and Aston Martin Creative Director of Exterior Design Miles Nurnberger.

The Brothers Brick: Was it a challenge to capture such an iconic car in LEGO bricks?

Miles Nurnberger: When Mike approached us with the first design we were hugely impressed, and this was just the first design. We thought that there was no way that all special gadgets that were added to the original Goldfinger car would be able to make it into a car made from LEGO. I personally love LEGO and it was part of the reason I ended up doing the job I do now as I played with LEGO as a child.

Mike Psiaki: We showed Eon Productions [the production company behind the latest James Bond movies] the initial designs and they were happy for us to continue without their input. This meant that we collaborated directly with Aston Martin and we were able to see designs and sketches from the original Goldfinger car designs to help understand those gadgets. 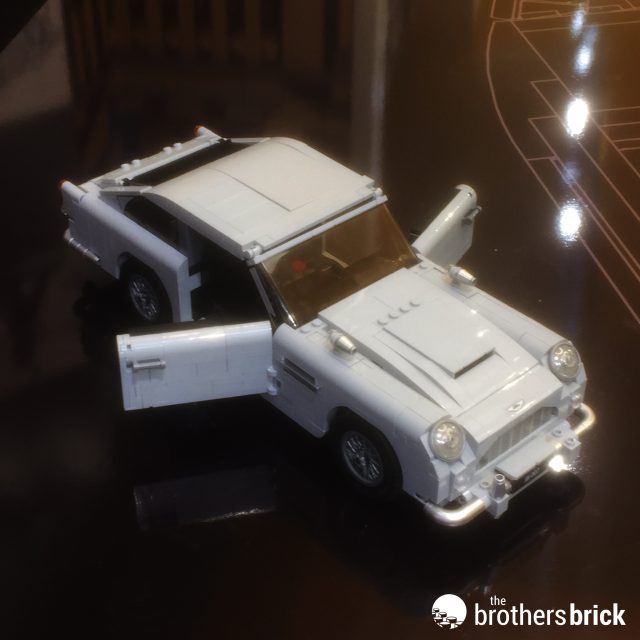 TBB: Did you feel that you were channelling Q when designing this set? [Q is the head of Q Branch, the research and development part of MI6]

MP: I must have watched the part where Q shows Bond how each of the gadgets works in the movie Goldfinger over 20 times to get a feel for it.  I really wanted to capture all the gadgets including the telephone handset in the door, which I love.

TBB: What part of the set are you most proud of Mike?

MP: I think the engine and the fact that when you lift up the hood you only see the engine. Many of the mechanisms controlling the functions are in this area of the build but they are hidden. It means you can open the hood without giving away any of the secrets which were a challenge.

TBB: Was there anything that Aston Martin insisted on being present to ensure the Aston Martin DB5 was represented correctly?

MN: We were happy with the initial design so there was nothing specific.  Although there were a few changes around the front that were made and we emailed back and forth. 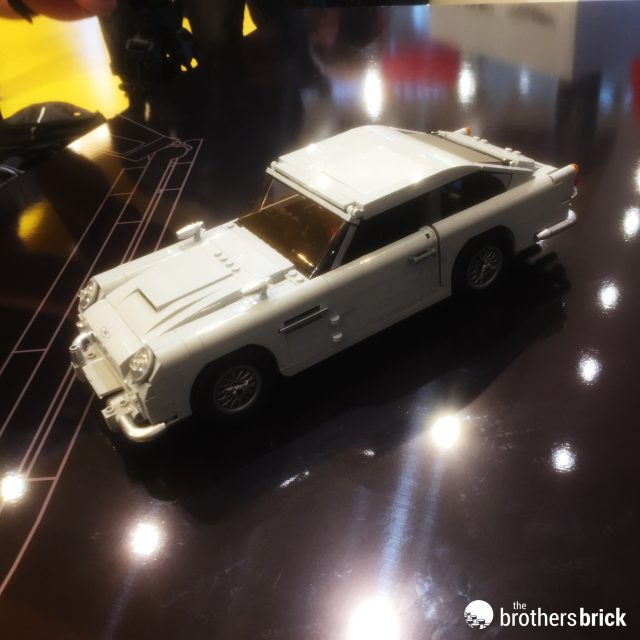 TBB: Have you built the set yet?

TBB: Mike did you experiment to see if you could eject a passenger from the ejector seat?

MP: We do not recommend using the ejector seat with anyone sitting in the seat, but I do know that it works with a minifigure in the seat.  If you push the mechanism rather than releasing the mechanism, you can also add extra impetus to the ejector mechanism. We had to film the mechanism in slow-motion with a mobile phone to try as there were more than 10 different seats on my desk at one point. The ejector seat would get stuck or misfire but it was too fast to see the issue until we slowed the mechanism down by filming it in slow motion.

…at this point, Mike was called to help rebuild the roof of the model on display as an over-enthusiastic member of the audience had ejected the seat and pulled the roof off the car to examine more. Luckily Mike was on hand like a secret service roadside assistance genius and with a few quick clicks, everything was back in place.

The mission to London Leicester Square would not be complete without the approval of Naomie Harris with our coverage from The Brothers Brick, so we did the secret Moneypenny handshake (aka Selfie) and called it a day! 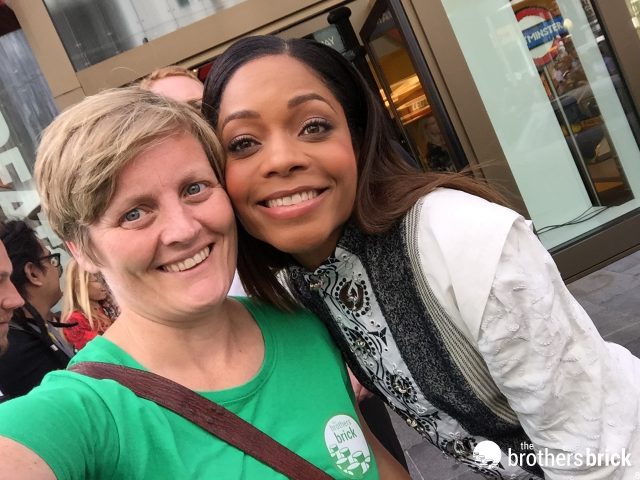 Visit our full gallery of Photos from the event: 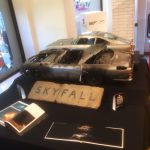 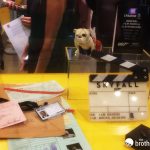 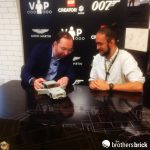 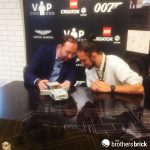 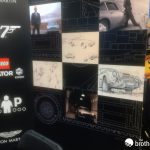 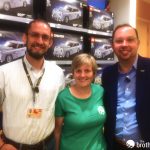 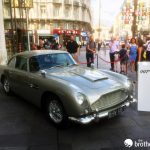 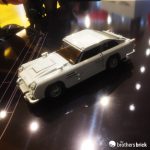 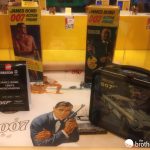 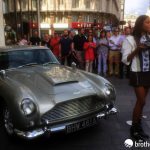 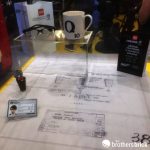 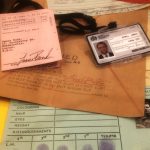 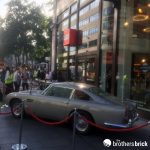 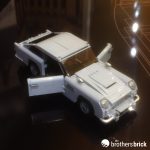