Some of my fondest childhood memories revolved around dreaming about dinosaurs. In the late 1980s, Tyco indulged me with prehistoric playthings in the form of Dino-Riders, and I pined for a world where I too could ride a triceratops. These memories came flooding back when I saw Jme Wheeler’s series of builds depicting his own dino-riding universe. Jme brings each setting to life with some excellent scenery, but he has also gone one step further by creating backstories for each scene. This particular build depicts the relationship between Gunther the fisherman and Cornelius the Carnosaurus, who was rescued by as a juvenile by a once-lonely Gunther. What’s particularly excellent is how Jme used brick-built water to make it look like Cornelius is drinking water, although I would imagine his presence sends fish into a frenzy. 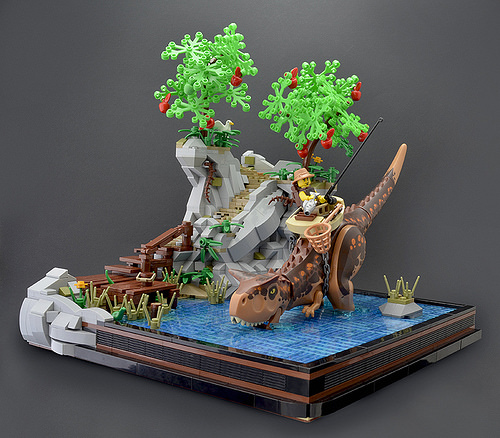 Next, we have Nomusa and her T-Rex mount, Obasi. Namusa’s tribe has tasked her with traveling through the arid desert to collect medicinal herbs and spices. Rival tribes after the same ingredients have proven problematic, but they had better tread carefully around Obasi because her bite is worse than her bark! Shades of tan and brown, coupled with rough terrain help convey the point that this is a tough place to live. However, it is also a place of beauty; Jme’s rock formations are epic and reminiscent of examples from the American Midwest. 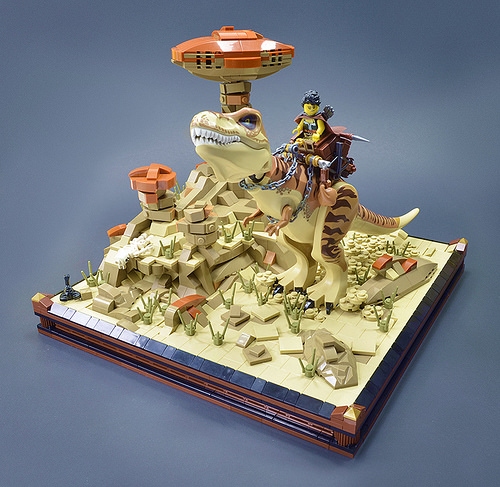 The last stop on our journey is the island nation of Aikella, whose military is largely concerned with defense against invaders. Much like the Vikings, they rely on “Berserkers” to rush enemy lines in a “shock and awe” maneuver. It seems only appropriate then that the berserker’s mount of choice is the Stygimoloch, a lovable little herbivore with the head-butt from Hades. While this is perhaps the most simple of the builds, it is also arguably the most action-packed scene. You can tell that a lot of thought was given in positioning each and every detail, right down to the berserker’s aerial maneuver Jme describes as the “Hammer of God.” 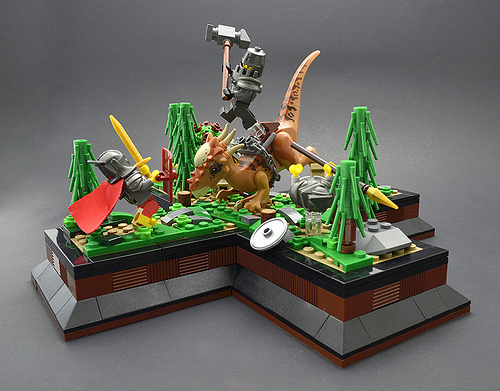 If you want to build some awesome dino riders yourself, check out our Field Guide to LEGO Dinosaurs!