It seems strange that given how well-received LEGO creations of Mesoamerican architecture are, they are relatively rarely seen in the online LEGO building community, as if they were lost in a jungle. Hidden somewhere deep in the jungles of Flickr, an ancient temple built by Aaron Newman has been discovered, caught in the middle of a human sacrifice, which has angered Quetzalcoatl, the feathered serpent himself! 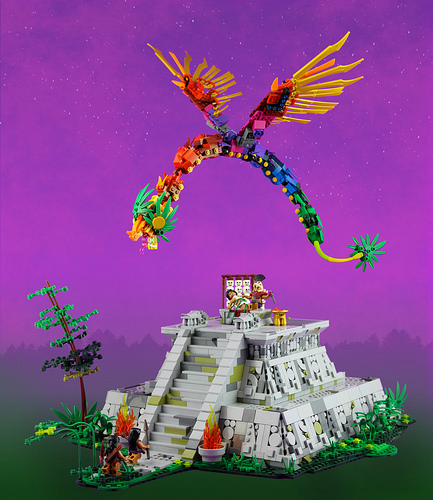 The temple serves as scenery for an engaging story hinted at by the builder in the photo’s description. The deity is beautifully sculpted and positioned, giving a convincing impression of graceful motion in the air. I love all the details across the temple, but the altar at the top is definetely the best part. A bit of greenery spilling around the temple and the excellent minifig action complete the scene, greatly aided by the very fitting and expressive background.