Some people call them streetcars. Some people call them trams, and other people call them trolleys. Whatever you know them as, Nouvilas’ version of a Peter Witt is so nice it’s “off the tracks.” A Peter Witt is a type of tram car, named after the man who designed the first one back in 1914. Nouvilas built his streetcar for a collaborative diorama representing Harlem, New York, in the 1930s. I really like the way the cheese slopes flare out to create the curve of the “bumper,” and the chocolate brown and tan color scheme feels authentic for the period….almost makes me hungry for a Nestle bar!

Built by the Brickstons group, this cool layout shows a few blocks of Harlem, New York, making the trolley look perfectly at home. 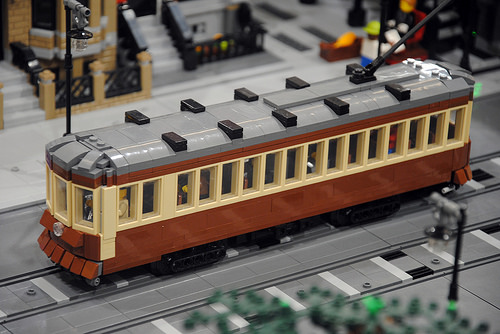