The State Theatre (皇都戲院) is a former cinema in the North Point area of Hong Kong. It is currently in a poor state of repair and faces demolition, despite being a Graded building and part of Hong Kong’s heritage. Originally known as the Empire Theatre, it was renamed the State Theatre in 1959 and was a cultural hub in post-war Hong Kong. Alan Boar and Mythbot collaborated to build this historic building in LEGO as a way to raise awareness of its plight, encouraging support for the preservation of Hong Kong’s historic buildings. 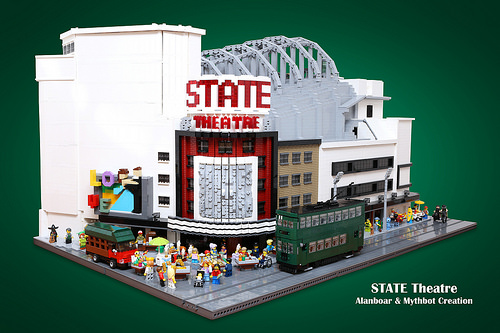 Don’t miss all the  street levels details like the Classic Tram , Leyland Truck, food vendor, as well as a hubbub of pedestrian activity.