Welcome to Day 14 of our LEGO Advent Calendar countdown. Each day, we’ll reveal the three mini-builds from the LEGO City, LEGO Star Wars, and LEGO Friends 2017 advent calendars along with commentary from our team. 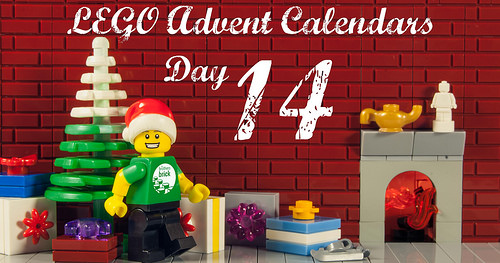 If you’re opening one (or more) of these advent calendars along with us, we’ve made sure the pictures and commentary on each day’s models will be behind a jump and posted in the evening every day, so we don’t accidentally ruin the surprise. What pint-size surprises will be in Day 14’s prizes?

For Day 14, we have a mini cargo ship from City, a First Order Snowtrooper minifigure from Star Wars, and another sled from Friends. 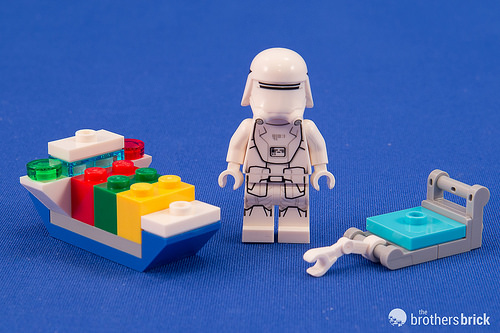 Chris: I can see that the City model is a container ship, but this model isn’t doing it for me. It’s just too blocky and short. The proportions are all wrong. The First Order Snowtrooper is a nice figure, but isn’t particularly interesting by himself, especially since his isn’t given a weapon, let alone a snowball. The Friends sled is another exercise in minimalism. Sure, it’s functional, but that’s about it.

Dave: Mini cargo ships have been done much better before, especially in the Panama Canal set. The Snowtrooper is the first winter-themed minifigure from Star Wars in the calendar so a welcome addition. The Friends sled is just… sad.

Rod: In the spring, this little container ship will shed its load into the sea, resulting in 1×2 bricks washing up on nearby beaches for the next twenty years.

Edwinder: Decisions, decisions… Stormie’s cousin Snowie has been sent by Master Kylo on an errand to inspect the captured vehicles from the rebel forces…. to be continued…

Andrew: Do we really need another Snowtrooper? The proportions of regular trooper to specialists is all off in the First Order. And yeah, it actually took a second look to recognize what appeared to be a rainbow warrior as a cargo ship. Meh. And double-meh to the second awful skeleton-arm sled.

Luka: I see now! The Friends sleds are supposed to connect together! This gives a whole new dimension to the Friends calendar, as it will probably have the most cohesion at the end. The City ship is neat with the crates that look like gifts.

Daniel: The container ship might be improved if the containers were made from plates instead of bricks IMO. Besides, they are not exactly holiday related, unless they are shipping LEGO sets! 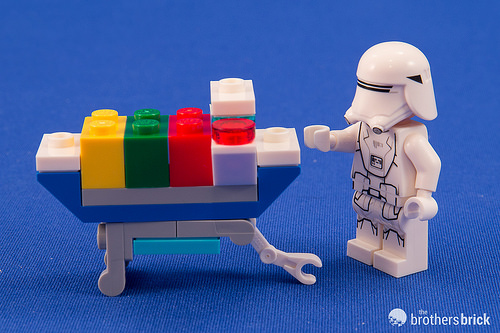 Chris: When the Snowtrooper shops at Trader Joe’s, what does he put in his shopping cart? Frozen dinners? Cold cuts? These are the questions that keep me up at night, folks.

Dave: I’m impressed that skeleton arm holds up that shopping cart without collapsing!

Edwinder: … and not to waste his knowledge and tuition fees from his engineering diploma, Snowie presents to us… a First Order CATS! Cargo And Transport Sledship. Master Kylo would be pleased… impressive, most impressive!

Daniel: Snowie tries to sneak a treat from the dessert table at the annual First Order holiday party… or is he spiking the punch?