It’s easy for LEGO builders to focus on the happy, shiny world of little plastic people surrounded by fake plastic trees, but builder Emil Lidé doesn’t shy away from making a powerful statement with his latest LEGO creation. Did you know that every piece of plastic ever produced (yes, including all the ABS that LEGO is made from) will continue to exist indefinitely in the environment? That there is a floating patch of trash in the middle of the Pacific Ocean hundreds of thousands of square kilometers in size? Emil uses LEGO as a medium to remind us of the impact that our modern lives have on the planet we live on. 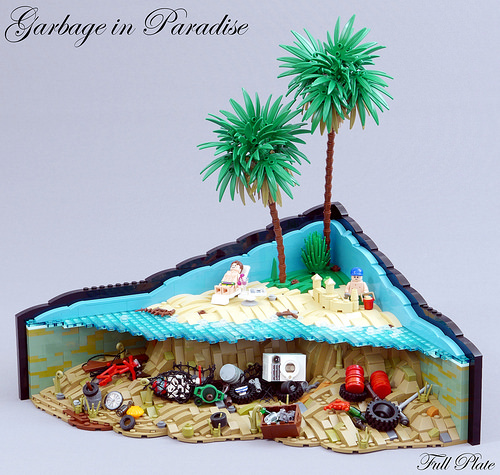 As much as I love the message that Emil’s creation conveys, it’s also an excellent LEGO build on its own merits. The tranquil beach scene above the water contrasts harshly with the waste beneath the waves, from the usual tires and barrels to bicycles and even a washing machine.