Most people may not think so, but LEGO builders really are artists in their own right. The medium that they choose to express themselves in is simply tiny bricks instead of the traditional tools of oil and canvas that we see more often. The traditional approach of interlocking these bricks is the expected aspect of it, but a more unusual approach is the loose placement of bricks, such as this spread by city son. 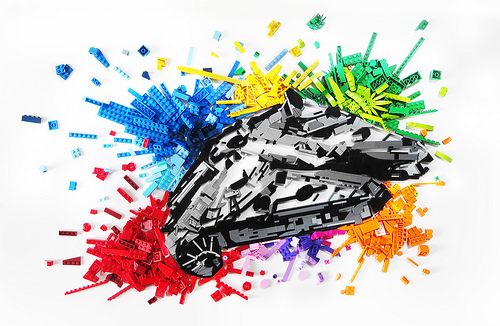 This design is a breath of fresh air to the overdose that the Millennium Falcon is getting recently due to the largest set ever being released by the folks over at Billund (plus a couple of major contests inspired by the venerable freighter). What stands out with this piece of art is the colorful, celebratory effect showcasing the Falcon in flight. It almost looks like a splash of rainbow paint in pop-art style.