It is understandable that the Lord of the Rings trilogy inspires more LEGO creations than its expanded lore collected in the Silmarillion, since the latter reads more like a textbook than a series of stories. But it is refreshing to see creations inspired by it nevertheless, even if the hand of builders has to be forced by contests such as the Middle Earth LEGO Olympics on MOCpages. This scene of the kinslaying at Alqualondë by John Snyder is one such refreshment, and it was indeed built for the aforementioned contest. 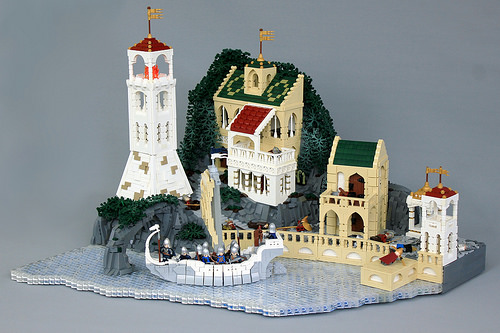 The builder has accompanied the build with a very informative description of the event, which I encourage more curious readers to explore.
The diorama features many interesting techniques and ideas, with high quality rocks and unique overgrowth. Coupling that with elegant architecture and a gorgeous Elven ship, John has brought a slice of elven history to life.