No, it’s not the tagline of a new superhero blockbuster, it’s Brian Kescenovitz‘s LEGO version of the day in July 1945 when humans created the world’s largest synthetic firework display ever seen, proving conclusively the destructive truth behind Einstein’s famous formula: Mass times the speed of light squared really does equal a whole lot of kinetic energy. 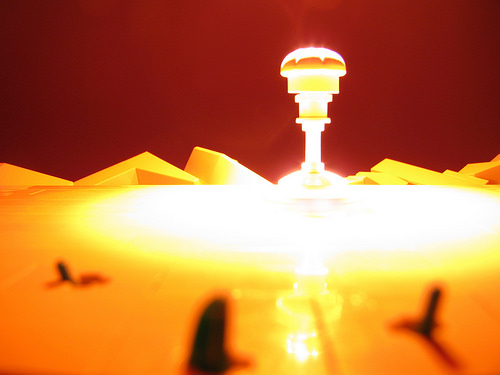 Brian’s chef-hatted mushroom cloud looks just like one of the old photographs of this event. The stunning lighting effect was achieved using a tight-beam flashlight shining straight down and shooting with a long 1.6 second exposure. I love how the miniature New Mexico mountains and blurred objects in the foreground give this micro-scale fulmination a real sense of magnitude.